F-35s to become Eyes and Ears of the Fleet 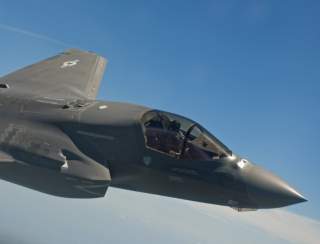 Advocates for the F-35 program have long been touting the unique value of the aircraft as a sensor node. Some even argue that this will be the central role of the Joint Strike Fighter (JSF) as opposed to air-to-air combat or ground attack. The combination of the multi-function AESA radar, advanced sensors, secure communications, stealthiness, speed and maneuverability, makes the F-35 ideal for operations inside adversaries’ airspace and air defense envelopes. From this special vantage point, the new fighter can pass attack warning and even targeting information back to follow-on aircraft, arsenal planes, and air and missile defense units, allowing them to engage targets at maximum range and effectiveness.

The Navy has been working for a number of years to expand the power of its air and missile defense systems by linking together available sensors, regardless of the platform on which they are carried, fuse all this information and provide high-fidelity targeting information to interceptor systems. One aspect of this is the Naval Integrated Fire Control-Counter Air (NIFC-CA). This system seeks to employ the Aegis fire control system to manage the data from a variety of airborne and ship-based radars in order to provide information on which to launch air and missile variants of the Standard Missile (SM-6 and SM-3) from any platform within range. One of the key sensor systems supporting NIFC-CA is the aircraft carrier launched E-2D Hawkeye radar surveillance plane. Recently the NIFC-CA program conducted a successful intercept test involving the use of the Aegis radar and battle management system to support launch of a land-based Patriot missile.

Now the F-35 has entered the list and nothing in air and air defense warfare will ever be the same. As reported by Dave Majumdar in National Interest, an F-35B, the short takeoff/vertical landing variant that has reached initial operating capability with the Marine Corps, was able to provide targeting formation to a ground-based Aegis test system which used it to launch an SM-6 at a simulated threat aircraft. This means that every large deck amphibious warfare ship and aircraft carrier will be able to deploy a number of JSFs, either the F-35B or the Navy’s F-35C model, to act as high flying, invisible eyes and ears in the skies. It is somewhat ironic that the Marine Corps will have this capability years before its sister sea service.

Clearly, the higher above the surface of the Earth you can locate a sensor the greater its range, up to its maximum power output. One of the problems the U.S. military has had getting the greatest effectiveness out of its existing air and missile defense systems, e.g., Patriot, Aegis and THAAD, has been the limited range at which surface-based radars can see incoming threats. One answer is to put a radar way forward of the defensive missile battery to acquire an early look. We have done that in the past, as far back as the Navy’s defense of the fleet at Okinawa in 1945. The problem with this approach is that the forward deployed radar and any platform carrying it is extremely vulnerable to attack.

With the F-35, this problem is ameliorated or even eliminated.  Even more important, forward based, invisible sensors provide the basis for enabling air and missile defenses to launch on warning or even launch on remote. This will allow the Aegis, Patriot and other defensive systems to attempt intercepts at the missile’s maximum range as well as conduct sophisticated fire strategies such as shoot-look-shoot that ensures an incoming threat is destroyed. The overall effectiveness of defenses where F-35s are present should rise substantially.

The F-35 can be employed just as easily to target offensive missiles against enemy ships and shore installations fired by U.S. platforms operating over the horizon.  This will improve both the lethality and survivability of U.S. forces.

Of course, the F-35 will have a central place in counter-air, interdiction and close air support missions by the Air Force, Navy and Marine Corps. But even when its internal magazines are empty, the JSF will still provide a key node in the joint force’s network.