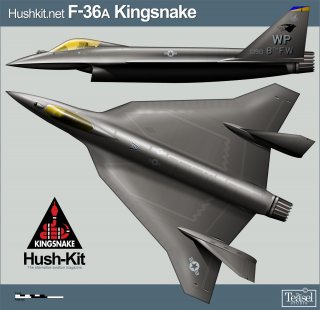 The Air Force Chief of Staff, Charles Q. Brown, recently announced that the Air Force is looking to purchase a new jet, as at least a partial replacement for the F-16 Viper.

Now, a group of experts has come together to create something of a fantasy jet that could serve as that replacement.

The “alternative aviation” publication Hush-Kit has assembled some experts to put together a fictitious plane that checks all the boxes of what the Air Force wants- a fantasy jet called the F-36 Kingsnake. The main experts include Stephen Mcparlin and James Smith, while  Andy Godfrey from the Teasel Studio put together a rendering of the plane.

“The F-35 is a Ferrari, the F-22 a Bugatti Chiron  – the United States Air Force needs a Nissan 300ZX,” the article says--a plane that would upgrade faster and more easily, and “need not feature such exquisite technologies.”

The needs for such a project, Hush-Kit said, include “a very fast definition process,” one that moves fast enough to avoid “pork-barreling,” and the retaining of a “Luddite czar,” in order to “block the addition of any new technologies, roles or excess weight increases during development.”

The site also suggests that the Hush-Kit be developed with “the smallest lowest-tech production line possible,” using existing technologies and components.

As for the shape of the plane itself, the site suggests “a lower density design with surplus volume, surplus electrical generation,” as well as “minimum onboard computer intelligence and maximum data-linking.” Also suggested is a simple fuselage shape, the use of 3D printing, and less emphasis on low radar signature than what was used in the  F-35 or F-22.

As for the plane’s wing?

“The wing is based on that of the F-16XL. The cranked arrow has an inboard section of increased sweepback, creating a controlled high-lift vortex without the need for a foreplane. The wing is efficient at high speeds aiding in creating a faster fighter than the F-35. The F-35’s slowness is a disadvantage for the beyond-visual range mission. The wing also allows ample room for fuel (we can expect a higher full fraction for the whole aircraft than the F-22) and external hardpoints (one notable issue that requires long range is the likely ability of supercruising Chinese J-20s to outrange F-22s).”

The hypothetical jet’s cockpit will contain a widescreen HUD, while solving some of the problems of the F-35, while its gun will be a  M61 Vulcan mounted in the starboard wingroot.

“Like the F-16 it would replace, the Kingsnake would be a multi-role fighter jet capable of air-to-air and air-to-ground missions,” Popular Mechanics said of the proposed plane. “The jet would carry missiles and guided bombs in internal bays, but as a non-stealthy plane, it would pack both on wing-mounted external hard points. The Kingsnake would also a gun, making it capable of strafing attacks against enemy ground forces.”