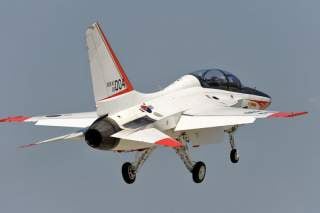 The newly elected president of the Philippines, Rodrigo Duterte, has been throwing shade on his country’s recently-acquired—and only—fighter jets, the South Korean FA-50 Golden Eagle.

“We only have what, two FA-50s? Why did you buy that?” he remarked in June this year. “What a waste of money. You cannot use them for anti-insurgency, which is the problem at the moment. You can only use these for ceremonial fly-by.” (The Philippine Air Force will have 12 of the supersonic fighters by 2017.)

He added: “There’s only one purpose for buying it. To match the airpower . . . At least 1-on-1 verses China. But, beyond Scarborough Shoal, son of a gambler, there are 300 Migs there. They can reach Manila in 6 minutes.”

While campaigning in March, Duterte had opined that the FA- 50s were a “waste of money” that they had no chance of taking on Chinese fighters. “I’m not going to war over Scarborough Shoal,” he commented, referring to islands off of the Philippine coast which are contested by China.

The infamously hot-tempered Duterte has recently made the news for calling U.S. President Obama “a son of a whore” in a press conference, leading to the cancellation of a scheduled meeting between the two at the ASEAN conference in Laos. Duterte was obviously more incensed at the prospect of being chided for encouraging vigilante killings of drug dealers than by China’s expansion into the waters off of his island nation’s shores.

These seemingly unrelated incidents actually point to a similar dynamic in play: the new Asian leader is wary of being drawn into an unofficial American-led alliance to counter Chinese expansion in the Pacific Ocean. He would prefer to avoid confronting Beijing, and redirect the significant military expenditures on anti-drug and anti-insurgent campaigns.

China’s recent aggressive expansion in the waters of the South China Sea is based on the so-called Nine-Dash Line. In the case of the Philippines, the dispute concerns both the Spratly Islands (also claimed by Vietnam) and Scarborough Shoal, which lies over 200 kilometers East of the main Philippine island of Luzon and over 1,000 kilometers southeast of China’s Hainan island. You can to judge the fairness of the “Nine-Dash line” for yourself by considering the map here.

China’s population exceeds that of the rest of the East Asian countries combined. Nonetheless, Japan and South Korea have little intention of dancing to China’s tune, and Vietnam, for historical reasons, is highly sensitive to perceived bossiness from its northern neighbor. The Philippines’ previous president, Benigno Aquino, had pursued plans to contest the Chinese claims to nearby waters and modernize the Philippine armed forces with U.S. assistance. Recently, a tribunal finally ruled against the Chinese claims in the South China Sea, though Beijing had earlier indicated it would not abide by its decision.

However, Duterte thinks money invested in countering China is wasted in a futile effort, and his country would be better served by taking a softer stance with an important trading partner, while redirecting spending towards internal security crackdowns.

So were Duterte’s scathing comments on the FA-50 merited?

The Golden Eagle was designed to serve as an advanced jet trainer by Korean Aerospace Industries (KAI), drawing on the firm’s experience license-producing F-16 Fighting Falcons. First conceived in 1997, the Golden Eagle drew on design elements of the Falcon, and also received 13% of its funding from Lockheed Martin. It made its first flight in 2002, becoming South Korea’s first indigenously designed supersonic aircraft.

The T-50 Golden Eagle—not to be confused with the Russian stealth fighter—was intended to serve as a two-seat Lead-In Flight Trainer (LIFT), a fast but forgiving jet intended to prepare pilots for flying actual combat aircraft. Unlike the older trainers it is replacing, the T-50 can attain speeds of up to Mach 1.5 (over 1,100 miles per hour) and fly up to 48,000 feet high. This performance isn’t impressive compared to frontline jet fighters, but it’s still capable enough to do the job. The T-50 is powered by a single General Electric F404 turbofan, though there is talk of trying out more powerful F414 or EJ200 engines down the line.

The T-50 trainers were deemed so successful and easy-handling that KAI decided to produce an upgraded version, the TA-50, that could do double duty as light attack plane with the ability to use precision-guided weapons and a more powerful radar.

KAI then pushed the design one step further with the FA-50—an airplane intended to serve as a cut-price supersonic fighter with fourth-generation avionics.

The FA-50, which made its first flight in 2011, adds greater fuel capacity and key avionics upgrades, including a radar-warning receiver to alert the pilot if he is being targeted by hostile radar, night-vision systems, and a data-link to integrate the airplane with friendly sensor and weapon platforms. Most importantly, it carries an Israeli EL/M-2032 pulse-Doppler radar with an effective range of 100 kilometers for detecting fighter-size aircraft. It can be used to lock on to air, ground and sea targets. The ELM nonetheless has shorter range and is less capable than the AESA radars now equipping U.S. fighters, and Samsung is apparently looking to develop an AESA radar for use in the Golden Eagle.

The FA-50, though highly maneuverable (it has a lower wing loading than the agile F-16, meaning can make tighter turns), is still not in the same league as top fourth-generation fighters. However, a factory fresh FA-50 costs around $30 to 35 million dollars, whereas those top-of-the-line fighters presently cost $70 to 100 million or more. Thus the FA-50 offers good bang for the buck and an accessible price point for less wealthy countries.

The FA-50’s range—likely under 1,100 miles—could be problematic for some operators. While it is adequate to serve as a short-range fighter—appropriate, say, for the compact distances of the Korean peninsula—it is less convenient for the Philippines and its vast oceanic flank. A round trip from Manila to the Spratly Islands entails 1,000 miles of travel, leaving little fuel to loiter or do anything once the Golden Eagle arrives there. Though lacking aerial refueling capability, the FA-50 can extend its range to using extra fuel tanks—but would have to sacrifice hardpoints for carrying weaponry.

In 2015 the Philippine Air Force announced it would upgrade three or four FA-50s to carry radar-guided AIM-7 Sparrow missiles with ranges of 70 kilometers. The Sparrows would be a major improvement—but the upgrades would average $17 to $22 million per plane, at least half the cost of each FA-50. Given that the Sparrow is not a state-of-the-art missile—it is not fire-and forget, so the pilot must keep his radar locked on the enemy fighter until it impacts—the price seems exorbitant. Possible explanations may include steep fixed costs, and/or the provision of Sparrow missile to go with the upgrade.

In any case, until the FA-50 is certified for carrying medium- or long-range missile, it won’t really be up to the task of serving as an air-superiority fighter.

The FA-50’s air-to-ground capabilities are far more satisfactory out of the box. It can employ deadly GPS-guided JDAM bombs, Maverick anti-tank missiles, and unguided cluster and conventional bombs and rockets. The Golden Eagle’s targeting computer and radar allow it to deliver even ‘dumb’ bombs with a high degree of accuracy. The FA-50 can haul up to 8,500 pounds of external stores on 7 hardpoints. A triple-barreled A-50 20mm cannon rounds out the armament.

Support for more exotic precision weapons is also in the works. For example, the Republic of Korea Air Force is interested in mounting Taurus KEPD-350-2 cruise missiles with a 250-mile range on the FA-50. The Golden Eagle can also carry Lightning II targeting pods and devices optimized for reconnaissance or electronic warfare roles, as well as the Skyshield all-in-one countermeasure system that can ward off enemy missiles.

While the FA-50’s air-to-air capabilities are not really feature-complete at present, potential upgrades to the engines, radar and especially air-to-air missiles suggest that the Golden Eagle may mature significantly in capability over time.

From Korea, Iraq and the Philippines to… the U.S. Air Force?

The FA-50 already seems poised to see significant use in the coming decade based on outstanding orders for the aircraft.

The Iraqi Air Force has received 12 of a total 24 FA-50s this year in a $1.1 billion dollar contract ($45 million per airplane). They are reportedly intended to prepare pilots to fly Iraq’s recently acquired F-16s, though they may also see use in ground attack missions against ISIS.