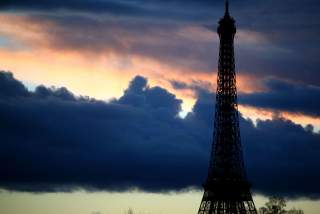 So much for Donald Trump’s prediction, in a tweet, that a terrorist attack on the Champs-Elysees would have a “big effect” on the outcome of the election. Trump’s last-minute intervention may well have backfired given the fear and loathing that he inspires in much of Europe. One Macron supporter told ABC News tonight, “Trump gave us the energy we needed.”

The results of today’s French election runoff indicate that Marine Le Pen will not be riding into the Elysee palace as a modern-day Joan of Arc, smiting the unbelievers and returning France to the French, as her myrmidons chanted at a rally in Zenith near Paris the other day. A few days before the election, I sounded out various French voters about who was likely to win. The shopkeeper in the Latin Quarter who told me she would be “quashed” in the end is starting to look like he had it right. At the time I was somewhat skeptical.

But already the French center-right is rallying behind Emmanuel Macron, an ex-banker and economy minister who is the darling of the global elites and head of the “En Marche!” party. As Francois Fillon put it, “abstention is not in me, the Front National would bankrupt France. I will vote for @EmmanuelMacron.” This is an amazing concession. The British Telegraph is right to proclaim that Macron is no conventional candidate but, rather, a charismatic operator who has pulled off a “Trumpian exploit, ripping up the rules of contemporary politics to ditch his party and lead a personal movement … which seems all but certain to lead him to the Presidential Elysee Palace.” In many ways, his triumph is far more remarkable than Le Pen’s. He is a political novice who zoomed ahead almost out of nowhere to become something of a French Barack Obama.

At bottom, as Fillon’s twitter message suggests, it really is about the money. Macron’s promise to promote deregulation to shake up the dirigiste French economy seems to be falling on receptive ears, at least for now. France is suffering from 10 percent unemployment even as its Teutonic neighbor hums along at a 5.8 percent unemployment rate. Outside of Paris, along the main highways, I saw various tent encampments that consisted of refugees from the Middle East. The security measures that France is taking to try and ward off terrorism are making it look as though its headed toward a permanent police state, as heavily armed gendarmes stroll in pairs through the streets.

But the country does not appear ready to take the kind of gamble that Le Pen would represent. Le Pen declared today this it is time to rescue France from “arrogant elites.” Pulling out of the European Union would represent an instantaneous financial disaster for France, which is why it is unlikely to occur. France is in rebellion but not revolutionary mode. To pull out of the EU would be to unilaterally surrender one of France’s strongest cards. The collapse of the EU would fully liberate Germany from the restraints, many of them self-imposed, that were placed on it after World War II. The EU has allowed the French to continue to play an outsized role in Europe, and British conservatives are not wholly wrong to see it as something of a French plot. If Macron wins on May 7, he will seek to leverage France’s influence, already increased by the defection of Britain, in the form of less stringent German economic measures towards southern Europe. A Le Pen victory would benefit Britain, which would no longer be an outlier in abandoning Brussels. As it stands, Britain remains in Little England mode all by itself.

But make no mistake: it’s already a revolt when neither of the two mainstream political parties is able for the first time to field a candidate in the election on May 7. What’s more, as Yascha Mounk notes, the young are open to populism: Le Pen and the hard leftist Jean-Luc Melenchon together got over 50 percent of the youth vote. Watch for some supporters of Melenchon, who was promising such economic flapdoodle as a 32 hour workweek, expanding the civil service by 200,000 positions and sweeping income redistribution, to turn to Le Pen. Melenchon is refusing to endorse Macron, saying that voters must examine their “consciences.”

Even if the center does hold in the form of Macron, this election was really a loss for the mainstream parties. For both the center-right and the socialists the rise of Macron and Le Pen is in equal measure bitter medicine. The far left despises Macron as a neoliberal—in Paris, I saw his name spray-painted on sidewalks deeming him an agent of the Rothschilds.

All of this hints at the larger travails assailing the bureaucrats in Europe who like to travel from meeting to meeting in fancy automobiles to chart the future of the continent. While European leaders will be relieved if Macron becomes France’s next president, they have hardly finished navigating the economic and political cataracts that could shipwreck the European project. And if, as seems likely, Macron wins in May, then he’ll have to deliver real progress or discover that Le Pen, who is only 48 years-old, is waiting for a rematch.