Get Ready, Russia and China: The F-35 Stealth Fighter Is Testing Out Its Most Important Capability 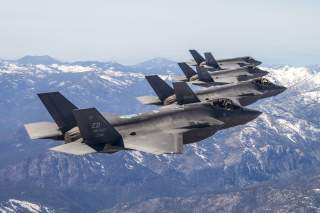 Pilots at Edwards Air Force Base, Calif., are testing the ability of groups of Lockheed Martin F-35 Joint Strike Fighters to accurately pass data amongst themselves during combat operations against advanced enemy surface-to-air missiles (SAM) defenses.

During the tests—which are being flown under the auspices of the 461st Flight Test Squadron—groups of between four and six F-35 of all three variants are using the Multifunction Advanced Data Link (MADL) to share their data between different flight groups. Proving out the MADL datalink—which uses phased array antennas to reduce the probability that its highly directional signals can be intercepted—is particular important for the F-35’s concept of operations, which is designed around its sensor suite and information systems.

“One of the primary reasons we do multi-ship testing is to ensure data is shared appropriately between aircraft in order to maximize lethality and survivability,” said Maj. Raven LeClair, an F-35 test pilot with the 461st Flight Test Squadron in a statement. “The F-35 uses MADL to share information on air and ground threats in order to more effectively target. This is especially applicable to one of the F-35’s primary missions—finding and killing advanced surface-to-air missile systems.”

According to LeClair, the testing activity at Edwards is currently focused on the defeating advanced SAM systems using Enhanced Geo Location—which marries the capabilities of the F-35’s AN/ASQ-239 electronic warfare suite with the MADL datalink. “After the threat is accurately located, it can be jammed and targeted,” LeClair said.

Ultimately, once the testers at Edwards AFB have proven the systems work, operational testers—who verify that a weapons system is useable by frontline units—will put the F-35 through its paces during various combat exercises. “As we approach the end of System Development and Demonstration phase, many of our capstone testing events will be multi-ship to ensure compliance with the requirements before transitioning to operational testing,” LeClair said.

Once the F-35 has completed development and delivers a fully operational capability to the Pentagon, the Joint Strike Fighter should be a useful asset that will have impressive situational awareness. “Having a common battlefield picture is one of the greatest assets in combat,” LeClair said. “This capability must be proven to be secure and ensure maximum interoperability between 4th- and 5th-generation fighters. The F-35 has an incredible capability to show the entire tactical picture and being able to share this tactical picture with all forces is critical to maximizing lethality, survivability and minimizing the risk of fratricide.”

Meanwhile, there are interim configuration A and B model F-35 aircraft serving with the Air Force and the Marine Corps. While those aircraft have been declared operational, the Pentagon’s operational testers question their ability to be used during actual combat operations against a high-end threat.