Health Insurance Is Killing Us Softly 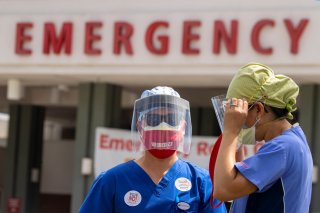 Healthcare has always been a crucial area of policy, but after coronavirus swept through America, it suddenly became paramount. Headlines everywhere lamented the number of people losing coverage after suddenly finding themselves unemployed—blaming the economic downfall resulting from the pandemic and lockdowns. Of course, the thought of swaths of Americans losing health insurance is nothing to sneeze at, but restrictions on access to care are far more damaging. Our weird obsession with how we pay for care is making us blind to the cold hard truth: we’ve lost care itself.

Millions of surgeries were postponed due to coronavirus restrictions—nearly one million orthopedic operations alone. The United States counted eighty-seven thousand more deaths in March and April compared to the same period in previous years. In fourteen states, half of those extra deaths were due, not to coronavirus, but to other health conditions. But these figures aren’t making headlines.

As of May, 20.6 million Americans had lost their job as a result of coronavirus, pandemic-related measures and the economic crisis. Given that over half of Americans get their healthcare coverage through their employers—an inadequacy that’s unique to our healthcare system and especially unfortunate today—that’s a real problem.

Thankfully, not nearly as many people lost their insurance as experts expected, and those that did are overwhelmingly becoming eligible for subsidized coverage. Short-term plans also work well for those that need to buy some time while they figure out their next professional step. To be sure, employer-based insurance offers more benefits, but, at the end of the day, the vast majority of individuals are still going to have coverage.

What they’re left without is care. An estimated four million elective surgeries were canceled over the virus’s peak twelve weeks and fewer patients with heart disease, stroke and diabetes symptoms showed up to the emergency department. That doesn’t mean these people were healthier—it just means these issues went untreated. Now that elective services are available again, patients are in more critical condition than they were. In fact, they need more care but have lower odds of being cured—and most of the patients who needed treatment were insured.

Patients didn’t choose to postpone treatment during the pandemic. In a field where deference should be given to doctors, it was the legislators who put themselves in charge of deciding how to deliver care, forming overwhelmingly strict criteria for providers to meet, such as requiring that hospitals obtain fourteen days’ worth of personal protective equipment without government assistance.

Policymakers’ focus on increasing coverage instead of care is nothing new. That’s why they created Medicaid (which benefits people experiencing poverty and disability) and Medicare (which benefits the elderly) in the 1960s. But it’s important to note that 79 percent of Americans below the age of sixty-five had private coverage, and that figure had been steadily growing over the preceding years. Fast forward to 2019, private coverage for that group is down to just 58 percent.

If we didn’t see it before, then we should now: No amount of insurance was able to slow the number of people dying from coronavirus. What we needed then and what we need today is more care. When government regulations prohibit access to care, lives will be lost—whether they’re covered or not.

That has always been true. In fact, studies demonstrate time and again that health coverage isn’t associated with better health, and that life expectancy has gone down since the Affordable Care Act was implemented. Access to needed services, however, is essential.

Fortunately, not every group is getting shorted care, and sometimes too much medical care will harm more than help. The elderly, for instance, receive far more care than they need, in part because Medicare will pay for just about anything that doctors deem “medically necessary.” If grandpa has end-stage dementia and a doctor decides that he needs a CT scan, that scan itself could put grandpa at a greater risk than any pathology it might help diagnose—since CT machines emit the radiations of two hundred X-rays. These kinds of excesses might explain why, in previous episodes of banned access to healthcare services, mortality stayed stable or even decreased. Medical errors, too, kill an estimated 250,000 patients every year, making it the third-leading cause of death in the country. But while there may be a balancing effect if needless and even harmful procedures are delayed or canceled, access to care should be the rule and patients should always have the final say.

Right now, they don’t. And insurance companies are winning—not Americans. When coronavirus hit and patients were barred from entering hospitals, their monthly insurance payments stayed consistent. U.S. households poured thousands of dollars into insurance companies every month while their use of healthcare services was, for most the most part, drastically diminished. Sure, they got to try telemedicine for the first time, and for free—but that’s not worth nearly as much as months of premium payments.

We should put patients in the driver’s seat, even during a pandemic. Patients aren’t medical experts, but they know themselves and can tell when a visit to the doctor is needed. And when it comes to healthcare reform, the focus should be on ensuring that healthcare services are available and that patients, not the government or impersonal conglomerates, are in charge of making the choices that are best for them.

Elise Amez-Droz (@eliseamezdroz) is a healthcare policy manager in the Washington, D.C. metro area and a Young Voice associate contributor.  Her writing has appeared in outlets such as The Washington Times, The American Conservative, and The Washington Examiner.