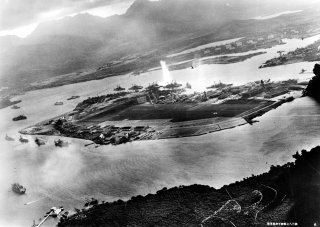 Here's What You Need To Remember: The first Japanese target in the Pearl Harbor attack was not the battleships - it was Hickam Field, where the U.S. Army Air Force was stationed, to keep American pilots from joining the battle. This was mostly successful, but a few pilots managed it - and fought desperately with the overwhelming Japanese strength.

At 7 AM on the morning of December 7, 1941 the U.S. Army Air Force had 152 fighters in the fifteenth and eighteenth Pursuit Group deployed for air defense of Hawaiian island of Oahu, and 57 bombers that could hunt enemy ships.

In the following two hours, two-thirds of these aircraft would be damaged or destroyed and four of the battleships they were there to protect sunk at the bottom of Pearl Harbor.

But at least fourteen U.S. Army fliers did manage to intervene in the skies over Oahu—too few to stop the relentless aerial assault, they nonetheless fought their overwhelming assailants tooth and claw.

The failure of U.S. air defenses at Pearl Harbor reflected a systemic communication breakdown the military and Washington. The White House was amply warned Japan might attempt some kind of attack due to its need to secure oil wells after Roosevelt imposed an embargo on the expanding empire. Washington warned U.S. forces in the Pacific to prepare for war and dispatch reinforcements to exposed garrisons in the Philippines and Wake island.

But Army and Navy leaders in Hawaii did not realize Pearl Harbor itself might be in range of an attack. Army Lt. Gen. Walter Short assumed the threat came from clandestine sabotage, so he ordered the aircraft in Hawaii lined up wingtip-to-wingtip in the open. After a week on alert, he gave Army units the weekend off to boost morale.

Still, the threat of war was palpable. On the evening of December 6, while seeing off the 38th and 88th  Reconnaissance squadrons as they prepared to fly their B-17s from Hamilton Field, California to Hawaii, Air Force chief General ‘Hap’ Arnold told the pilots “War is imminent. You may run into a war during your flight.”

When at 7 AM on December 7 technicians manning the Army’s new SCR-270 radar at Opana Point detected some of the 183 Imperial Japanese Navy warplanes inbound for Pearl Harbor, their untrained commanding officer assumed the contacts were the B-17s due to arrive.

In fact, the B-17Cs and Es were approaching Hawaii from a virtually identical trajectory and bumped into some of the 41 A6M Zero fighters tasked with providing air cover and strafing parked aircraft.

The Flying Fortress famously bristled with defensive .50 caliber machine guns—all of which were stowed away without ammunition on the transiting aircraft. Fortunately, the rugged bombers proved they could withstand considerable punishment from marauding Zeros.

Carnage at Hickam and Wheeling Airfields

Though U.S. battleships were the raid’s primary target, mission planner Minoru Genda emphasized destroying American airpower on the ground before it could inflict losses or launch a counter strike.

The B-17s and their Japanese attackers were both headed for Hickam airfield, located near the eastern shore to the entrance of Pearl Harbor.  Hickam hosted 45 twin-engine B-18 Bolo and A-20A bombers, and twelve B-17Ds of the 5th and 11th Bombardment Groups.

At 7:55, Japanese bomber began demolishing the neatly ranked Bolos and Flying Fortresses with bombs and machine gun fire as you can see in this video.

This was not a safe environment in which to land a four-engine bomber, but by 8:20 AM ten of the inbound B-17s successfully managed it—though a strafing Zero subsequently caused one freshly landed Fortress to combust. Another B-17 found sanctuary at Bellows air base in northeastern Oahu, and the last landed a hole-in-one at the Kahuku Golf Course.

Wheeler Army Airfield hosted most of the island’s fighters. At 7:55 AM, 25 D3A1 ‘Val’ dive bombers came shrieking down on field spitting 7.7-millimeter machine gun rounds and blasting parked P-26, P-36A and P-40 fighters with bombs—destroying 48 and damaging most of the rest.

But not all of the fighters were at Wheeler.  Eight P-40Bs and two P-36A gunnery trainers (stripped down to just one gun!) of the 47th Pursuit Squadron were temporarily detached to austere Haleiwa airstrip in northwestern Oahu.

Lieutenants George ‘Wheaties’ Welch and Ken Taylor still in their tuxedos recovering from late night revelry at a hotel when they heard the attack unfold.  They called and requested that their fighters get prepped and raced ten miles to the airstrip in a Buick.

Their P-40 Tomahawks were armed with four wing-mounted .30 caliber wing guns and two .50 caliber guns in the nose—but lacked ammunition for the latter. They were agile and reasonably fast and well-armored, but had inferior high-altitude performance compared to Japanese A6Ms.

Welch fell in behind the Vals and made one catch fire with a five-second burst—though unbeknownst to Welch, the pilot managed to nurse his damaged bomber back to its carrier. A burst from Taylor caused another Val to explode in a fireball. The two American fliers then converged on a third D3A1 and sent it smashing into the beach.

A third pilot, Lt. Edgar Dains flying a P-40 from Haleiwa shot down a D3A1 dive bomber, scoring the first U.S. air-to-air kill of World War II. Sadly, he was subsequently killed by friendly ground fire while flying a P-36 out of Wheeler.

Lieutenants Harry Brown and Robert Rogers, meanwhile, took off with the two P-36 Hawks and tangled with Zeroes over western Oahu, shooting down one and damaging two more—neither of which returned to their carriers.

200 miles to the west, the carrier USS Enterprise was steaming towards Pearl Harbor—spared from being caught in the attack by weather delays. Nonetheless, it launched nine two-ship elements of SBD-2 Dauntless dive bombers from VB-6 squadron for routine scouting and navigation training in the vicinity of Oahu.

The Navy aviators ran into Zeros at 8:15. The SBD of Ensign Manuel Gonzales was apparently destroyed in a surprise attack. The remaining two-seat bombers charged into the scrap. Zeros dispatched five more of the slower SBDs in swirling dogfights without loss. Mistaken friendly ground fire downed a sixth SBD, as well as five out six VF-6 Wildcats dispatched to reinforce Ford Island later that day.

Taylor and Welch landed at Wheeler field where ground crew finally began loading .50 caliber ammunition. But they weren’t done by the time the second wave of 167 Japanese warplanes descended upon Oahu.  The loaders fled, leaving empty ammunition boxes on the P-40’s wings.

The Tomahawk pilots decided to take off towards the incoming attackers so as not to present their tails to the enemy—Taylor even sprayed machine gun fire while still rolling on the ground.

Once airborne, Taylor was closing for a head-on pass with a Val when another dive bomber riddled his Tomahawk from behind, wounding him in the leg. As Taylor juked evasively, Welch fell in behind Taylor’s attacker and peppered it with .50 caliber machinegun fire, causing the two-seat bomber to smash into a pineapple field below.

Welch went on to chalk a fourth kill (a Zero), while a wounded Taylor scored his second, managing to dodge defensive fire from the tail gunner of another Val to send it spinning to the ground in flames.

Meanwhile, nine Zeroes came screaming down over Naval Air Station Kaneohe Naval Air Station and destroyed 27 of its 33 PBY Catalina seaplanes (pictured here) and damaged the rest. The Catalina fliers did notch a small victory earlier that day when they helped hunt down two Japanese mini-submarines.

The marauding Zeros then swept down upon Bellows field, machineguns and 20-millimeter cannons chattering as three P-40Bs from the 44th Pursuit Squadron attempted to take off. One Army flyer was killed leaping into his plane, while two more made it off the ground but were promptly shot to pieces

Back at Wheeler, Lieutenant Lewis Sanders of the 46th Pursuit squadron managed to scrounge together four P-36s and took off into the fight at 8:50 AM led by. From higher altitude they pounced on six of the Zeroes that had strafed  Bellows field—with Sander’s dive attack sending one smoking into the ground.

He last saw his wingman Gordon Sterling plunging his blazing P-36 into a cloud bank chasing a Zero as another Zero pumped cannon shells into his tail. Sterling never returned to base, but the two Zeroes did.

Meanwhile, the machine guns of a P-36 flown by Lt. Phil Rasmussen began randomly discharging just as a Zero passed across their line of fire and promptly disintegrated.      Two more Zeros shot his Hawk’s tail and rear canopy to pieces, but the Bostonian shook his pursuers off in a cloud bank and nursed his crippled plane back to base.