Hollow Point Ammunition for the U.S. Army: A Good Idea? 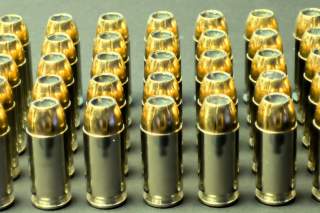 With the minimum of fanfare, the U.S. Army has made an announcement that challenges a long-standing prohibition in international humanitarian law: the banning of ‘expanding’ or hollow point ammunition from the battlefield. The announcement came in the context of a presentation on the updated requirements for the next-generation U.S. Army handgun—designated the XM-17—which took place at a Picatinny Arsenal Industry Day last month.

Earlier discussion of the requirements for the XM-17 suggested strongly that the new handgun would need to be at least .40 or .45 caliber to achieve the ballistic effects specified by the U.S. Army solicitation. However in this new statement, the U.S. Army spokesman quietly added another consideration: that the new handgun be compatible with “special purpose ammunition,” specifically jacketed hollow point (JHP) ammunition. For those companies planning to submit one or more designs for the XM-17 competition (success in which will result in a massive order of 280,000 handguns at a minimum) this means that handguns chambered for the NATO standard 9mm round are now serious contenders alongside .40 or .45 caliber guns. That’s because JHP ammunition dramatically increases the lethality of ammunition, such that a smaller round like the 9mm can achieve effects similar to significantly heavier bullets like those fired from .40 or .45 caliber pistols.

How does it work? Put simply, hollow points expand on impact. The design of JHP rounds means that the bullet typically turns into a mushroom shape when it hits its target, resulting in a larger wound channel than would be made by an equivalent full metal jacket (FMJ) round. It was precisely this tendency to create more significant wounds that led to the inclusion of clause IV, 3 in the 1899 Hague Declaration, which states that “the Contracting Parties agree to abstain from the use of bullets which expand or flatten easily in the human body, such as bullets with a hard envelope which does not entirely cover the core or is pierced with incisions.”

It’s noteworthy that the “special purpose ammunition” announcement by the U.S. Army, though low-key, was accompanied by a presentation by a representative of the Army Judge Advocate General’s Office. While no transcript of that presentation is currently available, at least one firearms focused media outlet reports that the legal justification given is essentially two-fold: first, that the U.S. is not a signatory to declaration IV, 3 of the Hague Conventions and so isn’t bound by its constraints; and second, that hollow point ammunition, because it transfers more of its energy into the target when it impacts, is less likely than FMJ to penetrate through the intended target and continue on, posing a risk of causing harm to non-combatants.

As a military ethicist, I welcome this move. There’s a good reason that police forces almost universally use hollow point rather than FMJ ammunition. The danger of over penetration with FMJ is significant—unacceptably so in a context where there is the real possibility of causing casualties among innocent bystanders. Unlike the situation at the turn of the 20th century when the Hague Conventions came into effect, today’s soldiers find themselves increasingly engaged in conflicts in built-up areas where non-combatants are around every corner. If the principle of discrimination—that which requires that combatants take every reasonable effort to avoid harming non-combatants— is to be taken seriously, then allowing the use of hollow point ammunition seems to be not only ethically acceptable, but under some circumstances ethically mandatory.

The fact that hollow point ammunition creates larger wound channels than FMJ, while obviously an unpleasant thought, doesn’t count against it. JHP doesn’t create superfluous wounds that simply add to the target’s suffering, without any further purpose—that would clearly be unethical. Instead JHP rounds increase the likelihood of killing or disabling one’s opponent, which is an entirely legitimate outcome to seek in a military engagement. In military use handguns are, in most cases, last-ditch weapons, employed in situations of emergency (such as when the soldier’s rifle suffers a stoppage), and having a greater chance of neutralizing opposing combatants under such circumstances should be embraced.

The big question, of course, is whether Australia will follow suit.