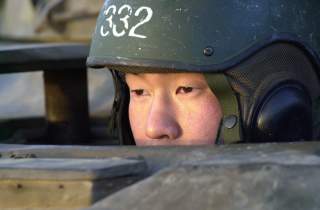 Recently the South Korean defense minister caused a stir when he announced the military was forming a “decapitation unit” of airborne special operators to target Kim Jong-un in the event of a conflict. While Seoul has long been exploring such a contingency, its prominent public airing is undoubtedly meant as a pressure tactic to cause Kim to reconsider how he might best ensure his own survival.

South Koreans are quite familiar with the stress caused by the threat of “decapitation.” That is because South Korean presidents have been the target of two major assassination attempts orchestrated by Pyongyang, both of which resulted in dozens of deaths.

At midnight on January 17, 1968, thirty-one men in dark overalls quietly slip across the demilitarized zone separating North from South Korea. This sector, located thirty miles directly north of Seoul, is lined with barbed wire and dense minefields, and overlooked by the sentries and machine-gun nests of the U.S. Second Infantry Division.

But the infiltrators clip through the barbed-wire fence, bypass or disarm the mines, and creep past the enemy guard posts, which are helpfully illuminated by the fires the sentries use to combat the winter chill. They camp out just a few miles away from the American division’s headquarters. The following evening, they penetrate deeper into South Korea. Confronted by the frozen Imjin River, they don white sheets for camouflage and skid over to the other side.

These men belong to Special Forces Unit 124, and have been training for this moment for two years. Selected for physical strength and political loyalty, they have been instructed in marksmanship and jiujitsu, taught to speak with southern accents and made to undergo gruesome tests of endurance, including going for days without food and sleeping with dead bodies in a grave. Each man is loaded down with over sixty pounds of gear, including a submachine gun, a pistol and eight hand grenades.

Their mission: to assassinate South Korean president Park Chung-hee at his residence in Seoul. As one commando states, “We thought the president there was a stooge, an American collaborator. I hated him.”

The assassins trek cross-country through forests and mountains by night and sleep by day. But the elite commandos have a blind spot: they are so indoctrinated in North Korea’s self-evident superiority that they naively assume the South is ready for revolution—and that killing President Park, who had come to power in a military coup, will serve as the catalyst.

This is unlikely. Though Park is a dictator responsible for the deaths of hundreds of protesters and political opponents, he has also initiated a program of state-led, export-oriented industrialization that is already transforming a formerly poverty-stricken South Korea.

On January 19, four young loggers—all brothers—stumble upon the commandos’ encampment. The commandos debate: should they kill the witnesses? Their leader Kim Jong-moon, veteran of seven prior infiltrations, instead lectures them on the virtues of Communism. The country boys avow their conversion to Marxism and promise not to inform the authorities.

Unfortunately for Unit 124, this epiphany is short lived. Once released, the farmers immediately contact the police. The South Korean army mobilizes several infantry divisions to root out the commandos. But the infiltrators quicken their pace to seven miles per hour and manage to race ahead of South Korean roadblocks. They enter Seoul in small groups on the evening of January 20, then regroup at a temple the next day just a mile away from the president’s residence.

By now, Seoul is buzzing with military patrols. The hit squad settles on a new plan: they strip out of their overalls, revealing South Korean fatigues underneath bearing the patch of the Twenty-Sixth Infantry Division. They then march brazenly down Samcheong-dong Road, posing as one of the very units hunting them down!

The daring ploy seems to work. The commandos pass several patrols and checkpoints without being seriously challenged. By ten p.m. they are just a few hundred meters from the grassy field in front of the presidential Blue House, a complex of several large traditional-style buildings with blue tiled roofs.

It’s at this point that Choi Gyu-sik, police chief for Jongno District, pulls up in a jeep. The thirty-seven-year-old police commander has set out to investigate after a sentry mentions the suspicious platoon to him. Now he demands that the group’s members present their identification papers.

The commandos struggle to come up with a glib response. Some say that then Choi pulls out a pistol. Others claim the North Koreans are startled by an approaching bus. Either way, the assassins whip out their guns and kill Choi and his driver.

However, a nearby platoon of South Korean infantry races towards the sound of gunfire and engages the hit squad. Soon the approach to the Blue House rings to the chatter of automatic weapons. A school bus accidentally careens into the crossfire and is riddled with bullets, then blasted by grenades, killing or wounding more than twenty civilians. Then Patton tanks began rumbling towards the assassins. Recognizing their fight is hopeless, they disperse, seeking to exfiltrate back across the border.

Over the following nine days, American and South Korean troops fight bloody skirmishes as they hunt down the fleeing commandos. Most try to take as many of their pursuers with them as possible. One captured commando is taken to police headquarters for interrogation by National Police Director Chae Won-shik. Mid-interrogation, he detonates a grenade concealed on his person, killing himself and injuring Chae.

In all, twenty-six South Korean soldiers and civilians die in the firefight in front of the Blue House and the manhunt that follows, and sixty-six are wounded. Additionally, three American soldiers are killed by North Korean forces while combing the DMZ for the infiltrators.

Just two days after the firefight, North Korean naval forces seize the USS Pueblo, an intelligence ship sailing in international waters off Korea, killing one crewmember and taking eighty-two captive. This move is seen as an attempt to divert attention from the Blue House raid, and gives Pyongyang hostages to forestall retaliation for the failed assassination.

Park Chung-hee is deeply shaken by the fact that thirty-one assassins had come within a few hundred meters of his doorstep. He withdraws to a safe house, drinking heavily and raging that the Americans seem more concerned with bargaining for the crew of the Pueblo than with taking aggressive action to counter what he believes is an imminent invasion. U.S. diplomats scramble to dissuade Park from starting a war and withdrawing the hundreds of thousands of ROK troops stationed in South Vietnam, then engaged in fighting off the Tet Offensive, offering him $100 million in additional economic aid.

But Park still wants blood, and orders the military to plan a hit on Kim Il-sung. The ROK army recruits its own thirty-one-man suicide squad called Unit 684 from petty criminals and unemployed youth, subjecting them to a brutal training regimen on the island of Silmido which leaves seven of them dead.

But in 1971, warming relations with the North cause Seoul to cancel the raid. The abused operators mutiny, killing eighteen instructors, hijack a bus and barrel towards the Blue House. Cornered by the army, most are either shot or commit suicide by hand grenade in a horrifying incident depicted in the film Silmido.

A year later, Kim Il-sung meets with director of the Korean Central Intelligence Agency and claims—absurdly—that the Blue House raid had been initiated against his wishes by “extreme leftists” in his government.

But Park has more bullets to dodge. In 1974, a North Korean sympathizer from Japan attempts on his own initiative to gun Park down while he is giving a speech in the national theater. He misses, and kills Park’s wife Yuk Young-soo instead.

The dictator’s luck runs out in 1979, as prodemocracy activists protest his repressive rule. During a banquet at Park’s safe house, his own director of intelligence snaps in a fit of rage due to criticism from a bodyguard that he was not brutal enough with the protestors, and shoots both the president and the guard dead.

As for Unit 124, there are only two survivors out of the thirty-one that crossed the border. Only Park Jae-kyung manages to slip back into North Korea. The once-expendable infiltrator rises to Vice Minister of Defense in 2007. He twice returns to South Korea with diplomatic delegations, his presence intended to needle Seoul.

Park’s comrade Kim Shin-jo follows a very different path. He flees without firing a shot and is captured by South Korean soldiers on Inwang Mountain. To his surprise, Kim is treated with respect by his interrogator, whom Kim grows to admire. He becomes a citizen of South Korea, leading Pyongyang to execute his parents. He goes on to raise a family and becomes a Presbyterian minister.