How Russia Could Win the Battle for Syria 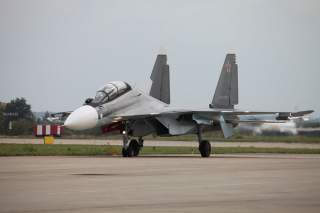 Some analysts expect that the Russian air strikes in Syria may be more effective than the U.S.-led air campaign for a simple reason, which is that Moscow enjoys close cooperation with the Syrian regime’s ground forces. “The Western campaign against ISIS has failed because there is no human intelligence there,” Royal United Services Institute analyst Kamal Alam said, speaking at an event held at the Center for the National Interest—which is the Washington D.C., foreign policy think-tank that publishes TNI—on Oct. 7. “The Russians are going to be more embedded with the Syrians.”

The lack of ground forces to identify ground targets has palpably bedeviled the U.S. air campaign for over a year since it started in mid-2014. While the U.S. military has a variety of means to gather intelligence in Iraq and Syria—which includes satellites, airborne and other technical means for collecting of intelligence, surveillance and reconnaissance (ISR) data—precise targeting in densely populated areas with civilians present often poses enormous challenges for analysts trying to differentiate between friend and foe. It’s often a challenge compounded by the fact that U.S. intelligence assets have been stretched thin in recent years as demand far outstrips supply. But it must be noted that Moscow’s forces have not shown  much regard for minimizing collateral damage in previous years—so it may not be as serious an issue for the Russian military.

Meanwhile, Iranian forces have been embedding themselves ever deeper with the Assad’s forces, said American Enterprise Institute fellow Matthew McInnis, who also spoke at the event. Iranian forces provide much of the strategic leadership, tactical guidance and intelligence for the Syrian army even if they don’t fight on the frontlines, he noted. It is unclear if the Iranians will help with coordinating Russian air strikes with the Syrians. The Syrian forces seem to resent Iranian control, McInnis said. Indeed, Russia’s intervention might serve to undermine Iran’s efforts even if they share similar goals for now, he said.

Last November during a visit to the U.S. Air Force’s 480th Intelligence, Surveillance and Reconnaissance Wing at Joint Base Langley-Eustis in Hampton, Va., intelligence analysts described the challenges they face working without help from having U.S. boots on the ground. One analyst told me that in places like Syria and Iraq, it is very difficult to tell an ISIS militant apart from a Kurdish Peshmerga fighter or a member of an allied Iraqi or Syrian militia. “Ultimately, that’s where additional intelligence comes in,” she told reporters.

480th ISR Wing Commander Col. Tim Haugh noted that during the occupation of Iraq, U.S. Army units would have been in the area providing on-the-ground reports—and more. “The other things we get in addition to human intelligence is just the presence on the ground,” he said. “So if we were looking at something on a street corner, and we were not sure what that was, there was a possibility at that time that there would have been an Army unit that had gone through that neighborhood.”

With no ground units available, Air Force analysts typically rely on the local U.S. embassy in a targeted country. However, in Syria, there is no U.S. diplomatic presence in Syria to speak of while the U.S. embassy in Iraq is located in Baghdad—far away from ISIS-occupied territory. “You could have a dialogue with them to get context,” Haugh said. “There is no [Army or Marine] captain on the ground to talk to.”

There is no evidence that Russian special operations forces are on the ground providing targeting data, said Paul Saunders, executive director of the Center for the National Interest, who also spoke at the event. Instead, the Russian air force seems to be relying on Syrian troops for intelligence.

For the Russians, the cooperation with Syrian ground force helps with their targeting, but it also means that Russian forces are likely to engage immediate threats to the Assad’s army first. “What they are saying is that they are unique because they have been invited by the Syrian government,” Saunders said. “They think that their airstrikes are going to be more effective because they are coordinating with Syrian forces on the ground.” Overall, the Russians appear to be positioning themselves to influence a negotiated end to the Syrian conflict once they are assured their interests are taken into account. “The Russian government is not going to commit enough forces to decide the conflict,” Saunders said.