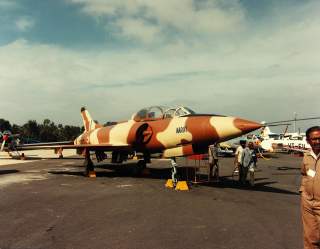 Fifty years ago, India brought into service its first domestically built jet fighter, the HF-24 Marut—indeed, the first operational jet fighter designed and produced by an Asian country besides Russia. Unfortunately, the HF-24 project was hampered by over ambitious goals, poor government oversight and underpowered jet engines, producing a disappointing subsonic light attack plane—foreshadowing some of the difficulties that would plague today’s Tejas fighter. And yet, the Marut went onto win a major victory for India during its brief combat career.

By the 1950s, Hindustan Aeronautics Limited (HAL) had developed a few propeller planes and had experience license-building British Vampire jets. In 1956, Prime Minister Jawaharlal Nehru authorized the domestic development of a Mach 2 multirole jet fighter with a range of five hundred miles, with the expansion of the Indian aeronautics sector a major objective.

This represented an enormously ambitious project for HAL. New Delhi recruited top talent in the form of Kurt Tank, designer of the legendary Focke-Wulf 190—the best German single-engine fighter of World War II. Even with Tank onboard, HAL had to massively ramp up its design staff (twelvefold!) and expand its facilities to accommodate a project of this scale.

By 1959 Kurt had already produced a full-scale X-241 glider mockup of the plane, and a flying prototype followed in 1961. However, his swept-wing twin-engine design counted upon an uprated Bristol BOr.12 Orpheus afterburning turbojet that could produce 8,150 pounds of thrust. Unfortunately, New Delhi was unwilling to invest 13 million pounds for Bristol to develop the engine, so the HAL team spent years fruitlessly shopping for an alternative in the Soviet Union, Europe and the United States, only for shifting political winds to nix the deal at every turn.

In the end, HAL was forced to make do with non-afterburning Orpheus 703 turbojets, which generated only 4,850 pounds of thrust. As a result, what was intended to be a Mach 2 fighter could only barely attain Mach 1, and even then only at high altitudes.

The HF-24 Marut (“Spirit of the Tempest”) was already obsolete by the time it entered service in 1967, unable to keep up with Indian MiG-21s or Pakistani F-104 Starfighters. Vastly disappointed, the Indian Air Force ditched planned-for radar and air-to-air missile capabilities, and relegated the jet to light attack duties. Only 147 HF-24s were procured, (including eighteen two-seat trainer variants). These equipped the Indian Air Force’s No. 10 Flying Dagger, No. 31 Lions and No. 220 Desert Tigers squadrons—leaving each sixteen-plane squadron with an unusually large surplus of redundant aircraft. To add insult to injury, it cost more to produce each Marut domestically than it did to buy more capable fighters abroad.

At least as a bomber, the Marut could carry up to four thousand pounds of unguided bombs and a hundred sixty-eight-millimeter rockets, in addition to the heavy firepower of its four thirty-millimeter cannons—though the recoil from firing all four guns at once proved so great that they sometimes popped the canopy-ejection switch, and led one test plane to fatally crash! The Marut otherwise had relatively precise controls and good low-speed handling.

Four years later, just as the first two Marut squadrons were beginning to overcome the type’s teething problems, India and Pakistan were on a collision course for war over Bangladesh, then known as East Pakistan. The underperforming fighter bombers were about to star in one of the most famous air-to-ground actions of the war.

Knowing war was imminent, Pakistan hoped to capture territory along the West Pakistan border in a preemptive strike on December 3, 1971 to compensate for the weak position of its forces in East Pakistan. One thrust on the first day of the war was aimed at Jaisalmer and eventually Jodhpur—but held as its first target the isolated border outpost of Longewala, located in the middle of the Thar desert.

The Pakistani force constituted two infantry brigades and armored battalions totaling to more than two thousand infantry and forty-five Type 59 tanks (Chinese copies of the Soviet T-54/55). At Longewala, they faced only the 120 men of “A” Company of the Twenty-Third Battalion of the Punjab Regiment. The outpost boasted only a single 106-millimeter recoilless antitank gun mounted on a jeep, a few mortars and medium machine guns, and a camel-riding squad of the border patrol. By any normal tactical calculus, there was no way the defenders should have held out for long.

However, as the Pakistani troops began to advance at half past midnight without the benefit of tactical reconnaissance, the tanks bogged down in the thick sand dunes around the outpost. The defenders, situated on a rocky outcrop a hundred feet high, waited until the struggling tanks had crept up to short range and then opened fire, destroying twelve of them with their the lone recoilless gun and old World War II–era PIAT antitank projectors. The Pakistani return fire inflicted only two fatalities. The attack ground to a halt as the Pakistani infantry encountered what they believed to be a minefield behind a row of barbed wire—which hours later was discovered not to exist.

A renewed offensive was being organized at the break of dawn when the Marut jets of 10 Squadron, reinforced by four Hawker Hunters, descended on the battlefield, unleashing T-10 rockets and spitting thirty-millimeter cannon shells at the bogged-down armor in what was described as a “turkey shoot.” By the afternoon, the attack planes had destroyed an additional twenty-two tanks and at least a hundred more vehicles, bringing what should have been an overwhelming assault smashing to a halt. This outcome is particularly remarkable as the Indian aircraft did not benefit from the specialized guided antitank missiles that give modern ground-attack planes high lethality against tanks. Indian ground forces counterattacked by noon, sending the Pakistani force into full retreat, setting the tone for the remainder of the war on the Western front.

The Marut remained in the thick of the action throughout the thirteen-day war, strafing airfields, bombing ammunitions dumps, and hitting tanks and artillery on the frontlines—flying over two hundred sorties and suffering three losses to ground fire. A fourth Marut was destroyed on the ground while taxiing on the runway at Uttarlai by a strafing Pakistani Air Force F-104 Starfighter. Nonetheless, the HF-24s boasted a high serviceability rate and proved quite tough, with several of the jets managing to return to base on just one engine after the other was shot up. Major Bakshi of 220 Squadron even scored an air-to-air kill in his Marut on December 7 when he pounced upon a Pakistani F-86 Sabre, a Korean War–era jet fighter.

After the conflict, there were several proposals to improve the HF-24 by installing more-powerful engines (the Marut Mark 1R and 2), but the Indian Air Force had little interest in investing further in the Marut when it could acquire faster and heavier-lifting Su-7, MiG-23 and MiG-27 fighter-bombers from the Soviet Union. The HF-24 began to be phased out of Indian squadrons in the 1980s, with the last aircraft being retired from 31 Squadron in 1990. Many of the airframes had only seen very limited use. Now the homemade jets serve on, only as monuments throughout India.

There are a couple of lessons to be drawn from the story of the Marut. The first regards how poor planning and a lack of direction can cripple even a promising project. Bureaucracy and corruption have caused many Indian defense projects to drag out so long that the systems being acquired are obsolete by the time the red tape has been overcome.

However, the main problem underlying the Marut program remains hardly unique to India. Quite simply, acquiring or building powerful jet engines remains a major stumbling block even for nations that command considerable financial resources, such as China. This explains New Delhi’s continuing interest today in acquiring new jet engine technology from the United States and Russia.

The other lesson is that effective application can be more important than maximizing technical merits. The Marut may have been a mediocre fighter, but at Longewala, the attack jet’s abilities were called upon exactly where they were need, when they were needed and in a situation where they could have maximum impact. Many technically superior weapons are never employed under such favorable circumstances; thus, India’s Marut jet fighter, though considered a failed design, more than pulled its weight in an actual combat.