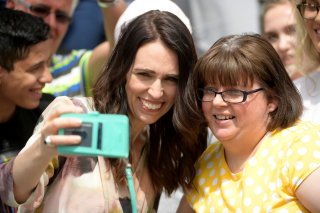 “Kia ora, everyone. I’m standing against a blank wall in my house – because it’s the only view in my house that is not messy.”

So begins a 2020 campaign message posted by New Zealand Prime Minister Jacinda Ardern. She speaks directly into her phone at day’s end, in a comfortable sweatshirt and with tousled hair, inviting Instagram viewers into her home as she lays out plans for the week ahead.

Voters and fans view her message from their own phones and smart devices: just over 22% of her 1.4 million Instagram followers watched the two-minute video. She is candid, approachable, tired and funny.

Facing a resurgence of COVID-19 just days later, the tone changes to one of concern. But the approach is the same in a 13-minute Facebook livestream, during which 34% of her 1.3 million followers tune in.

In the run-up to the October 17 election, Ardern’s Facebook following alone is four times greater than those of the other seven main party leaders combined. Politician or not, this makes her a serious influencer by anyone’s metrics.

While the opposition leader’s husband has recently been feeling the heat for his anti-Ardern Facebook posts, Ardern’s own activity is almost relentlessly positive. It’s been that way since she began turning up regularly on live after-dinner Facebook feeds not long after becoming Labour leader seven weeks out from the 2017 election.

Her organic appeal and clear comfort with the format helped her own the space. By the time she was in office, she spoke to Kiwis like an old friend, using the one-way (“parasocial”) relationship with her audience to speak seemingly off the cuff about the day’s events and what she’s thinking.

Read more: Are women leaders really doing better on coronavirus? The data backs it up

She is ostensibly unfiltered – tired, often laughing, but above all in command and with creative control over what she posts, shares and shows. This alone helps boost perceptions of her authenticity and expertise.

Ardern joins a continuum of media-age communicators who came to define their political brands via their preferred platforms.

US President Franklin Roosevelt used his radio “fireside chats” in the 1930s and ’40s to explain policy to Americans. By the 1960s John F. Kennedy had emerged as the original TV president after the first ever televised debate (with Richard Nixon). In New Zealand, Robert Muldoon was the first politician to master the art of political TV.

Now, in the digital age, the pace of communication and reach of social media platforms have created the first Twitter president: Donald Trump’s tweets are considered official statements, with more than 11,000 posted from his inauguration in 2017 to the end of 2019.

In 2020 social media are not simply useful political channels (more than 600,000 New Zealanders follow a party account), they are a major electoral battleground.

Read more: Populism from the Brexit and Trump playbooks enters the New Zealand election campaign – but it's a risky strategy

Ardern knows this. She is a prolific poster, with quick and informal videos (typically one to five minutes long) making up 81% of her 20 unique posts in a single week in August.

Facebook sits at the heart of her outreach and messaging. Voters, citizens, foreign observers and fans mingle in the comments section, with the general tone being positive and supportive of her leadership.

Good rates for mega-influencers (those with more than a million followers) on Facebook typically range from .01% to .42%. Rates on Instagram can be as high as 12% for celebrity names such as Taika Waititi.

Analysis of a seven-day period in August, which spanned the Labour Party campaign launch, parliament rising, the resurgence of COVID-19 and subsequent new lockdowns, shows the range and depth of Ardern’s political influence strategy.

Her Facebook livestream videos – broadcast live but available to watch and comment on later – had an average 1.83% engagement rate on campaign and policy topics and 3.5% on COVID topics.

Ardern is disarming, comfortable and relatable – all key traits that our research suggests increase perceptions of authenticity and expertise. Her engagement puts her on par with, or ahead of, other prolific celebrities such as Rachel Hunter (who also nets a 1.8% engagement for her average of 15 posts a week).

One five-minute Facebook livestream, posted just before dinnertime on the Saturday of the Labour Party’s campaign launch, gives a taste:

“Hi everyone, I’m sneaking a quick moment while I can hear Neve distracted in the sandpit,” Ardern begins (referring to her two-year-old daughter). As she outlines policy, those watching post heart and thumbs-up emojis, ask questions and talk to one another. The post has a 2.3% engagement rate.

It may be a long way from Trump’s high-pitched, angry use of Twitter, but it is just as brand-aware and on-message.

The New Zealand prime minister is rare in the sense that she is a highly visible social media celebrity as well as a political leader. But at 40 she is also not getting any younger.

If Donald J. Trump is the first Twitter president and Jacinda Ardern the first Facebook prime minister, it’s probably time to ask who will be the first TikTok politician.