Could Trump's Impeachment Crisis Push Hillary Clinton to Run in 2020? 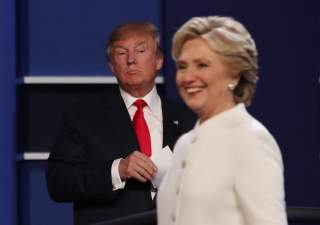 She’s back. Hillary Clinton, who lost the 2016 election to Donald Trump, lashes into him in a CBS News interview that was released on Thursday, declaring that he’s an “illegitimate president.” She also laced into him on Thursday night in an appearance before the National Abortion Rights Action League, not to mention an appearance on Friday at Georgetown University, where she said that Trump has transformed American foreign policy into “an extortion racket” and “stabbed in the back” career foreign service officers. Them’s fightin’ words!

The ostensible purpose of her CBS interview was to promote her new tome, The Book of Gutsy Women, co-written with her daughter Chelsea. But Clinton’s sallies against Trump raise a key question: is she gunning for a rematch in 2020?

The ferocity of her serial assaults on Trump suggests that she might. For one thing, she dismissed the notion that 2016 was her fault. Instead, she suggested that Trump deployed a variety of underhanded methods to subvert what would have been the true verdict of voters: “I believe he understands that the many varying tactics they used, from voter suppression and voter purging to hacking to the false stories - he knows that - there were just a bunch of different reasons why the election turned out like it did.”

Nor was this all. She likened the 2016 campaign to “applying for a job and getting 66 million letters of recommendation and losing to a corrupt human tornado. And so I know that he knows that this wasn’t on the level. I don’t know that we’ll ever know what happened.”

Clinton went out of her way to defend Biden. She explained, “So this is an effort to sow these falsehoods against Biden. And I don’t care if you’re for the [Democrats] or you’re a Republican, when the president of the United States, who has taken an oath to protect and defend the Constitution, uses his position to in effect extort a foreign government for his political purposes, I think that is very much what the founders worried about in high crimes and misdemeanors.”

Clinton’s aggrievement about the 2016 election should hardly come as a surprise. The belief that the election would be rigged was originally floated by Trump, but after he triumphed it was suddenly embraced by Democrats. The inconclusive Mueller Report was supposed to represent an extensive attempt to get to the bottom of the controversies swirling around the election and Russian influence, but only ended up heightening partisan polarization.

Now it’s difficult not to wonder if Clinton is pining for another go at Trump to try and prove that she has what it takes to oust him from the Oval Office. The conventional wisdom is that Biden is too old to make a real run for it and that Elizabeth Warren is too left-wing. Wall Street hates her as much as she hates it. By contrast, Hillary comes from what used to be called the New Democrat wing of the party. Wall Street loves her as much as she loves it. If she jumped in the race now, she could argue that now more than ever Democrats need her to regain what was stolen from them in 2016. The name of her book about the race was called What Happened. Now she could declare, “It’s happening!”

For his part, Trump would welcome the opportunity to demonstrate that 2016 wasn’t a fluke. Far from stealing anything, he won it fair and square. The Republican base would also savor the opportunity for Trump to battle Clinton and revive his chant of “lock her up.” As Trump’s tweets today show, he has lost none of his zest for going on the offensive, condemning Peter Baker of the New York Times and New Yorker writer Susan Glasser as frauds: “Obama loving (wrote Obama book) Peter Baker of the Failing New York Times, married to an even bigger Trump Hater than himself, should not even be allowed to write about me. Every story is a made up disaster with sources and leakers that don’t even exist.”

As much as Trump loathes President Obama, it’s Hillary who has been his true foil. A 2016 election 2.0 would be a dream come true for him. Of course, if both Trump and vice-president Mike Pence were impeached and removed from office, then House Speaker Nancy Pelosi would become the first female president. But for now, Hillary’s name is inevitably going to surface as a possible contender in 2020. Does she have the guts for it?