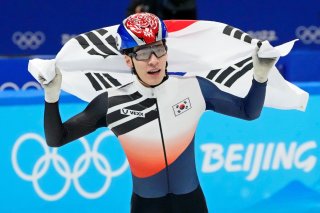 The Olympics have ended with South Korea bringing home nine medals and a growing resentment of China.

Long before the torch relay began, the XXIV Olympic Winter Games in Beijing were already a source of burning controversy. When the light was lit by a Uyghur cross country skier at a ceremony in which a representative of China’s ethnic minority Chaoxian-zu race donned a Korean hanbok dress, it was just the beginning of many controversies.

The Chosun Daily’s special reporting team in Beijing concluded: “The Beijing Winter Olympics … exposed the weakness of Korea-China relations. The controversy over the hanbok dress and the poor officiating easily transferred into anti-Chinese and anti-Korean sentiment.”

Korean politicians, including the major candidates in the upcoming presidential election, slammed China, and the Chinese Embassy in South Korea criticized the Korean politicians back. Netizens from both countries unleashed seething vitriol. In one example cited by the Chosun Daily, an employee of a Chinese think tank shared fake news accusing a Korean speed skater of throwing the panda mascot Bingdun-dun in the trash can.

The games opened on February 4 with the kind of grand ceremony China has become known for. For years, China has put great effort into proclaiming itself a tolerant multi-ethnic state of fifty-six officially recognized ethnic groups. Taking the vast Mongol-led Yuan Dynasty and Manchu-led Qing Dynasty as high points of its history, China lays claim to Tibet, Xinjiang, and Inner Mongolia. The Chinese Ministry of Foreign Affairs argues on its outreach website, “Although there were short-term separations and local divisions in Chinese history, unity has always been the mainstream in the development of Chinese history.”

While the few territorial disputes between China and the two Koreas are relatively limited and not fiercely contested, the dispute over the territory of history is extreme. The history and traditions of the Korean kingdom Goguryeo (37 BCE–668 CE) and its successor Balhae (698–926 CE) are claimed by both Korea and China. This underlying tension periodically leads to arguments about the origins of kimchi, Dragon Boat Festival, and other items of cultural heritage.

So, when the Chinese woman walked out onto the field of Beijing National Stadium wearing the hanbok, many Koreans assumed it was an example of China claiming a part of Korean culture as its own. China denied that interpretation, stating that the woman was just one of fifty-six people representing the ethnic peoples living in China.

Indeed, she was surrounded by representatives of each group, all wearing the clothing associated with that group. Over 1.8 million Chinese citizens of Korean ethnicity live in the People’s Republic of China, most of them in the border region that long ago was a part of Goguryeo. More than half of the Chaoxian-zu (Chinese name; Joseonjok in Korean) crossed over the porous border during the Japanese occupation of Korea in the period between 1911 and 1950.

The inclusion of Chaoxian-zu in the group of Chinese ethnic groups was not likely an intentional affront to Korea, but rather a standard part of China’s usual ethnic policy expression. It might have caught Koreans, who have no such ethnic policy, off guard.

The admonition of Democratic candidate for president Lee Jae-myung towards China to “not covet the culture of others” came as a blow to China. Anti-China sentiment in Korea largely has been associated with the Right, while the progressive Democratic Party has been accused of being pro-China by its critics. It would be fair to say the Democrats have often been more critical of Japan than they have been of China, and they were more supportive of working with China on the North Korea issue than were the conservative People Power Party. The outrage expressed by liberals as well as conservatives shows negative views of China are spreading across the spectrum.

Korea’s anger against China was incited again during the 1,000-meter speed skating relays when two of South Korea’s skaters, including world record holder Hwang Dae-heon, were disqualified, paving the way for China to take gold and silver. Hwang Dae-heon passed Chinese skater Ren Ziwei on the inside to take the lead and cross the finish line first, but he was disqualified for what appeared to be, if anything, gracing contact. Fellow Korean Park Jung-hyuk was also disqualified.

Then in the finals, Ren and Hungarian skater Sándor Liu Shaolin were scuffing so intensely Ren even threw Liu down into the ice. Liu got up and finished first but was disqualified for the pushing, while Ren was not and was allowed to take gold. The ruling appeared to many to be a clear double standard. Both Korea and Hungary protested to the head referee, and both country’s protests were rejected.

“I can’t contain my disappointment and anger,” candidate Lee Jae-myung wrote of the rulings on Facebook. The increasingly critical words expressed towards China might mean shifting perspectives on issues of policy import, too. Lee has coupled his sports-related anger with calls for cracking down on illegal Chinese fishing operations in Korean waters.

China’s embassy in Seoul has issued statements of rebuke to unnamed (but implied) Korean politicians, further fueling the flames. “Some South Korean media and politicians have criticized the Chinese government and Beijing Olympics as a whole, even instigating anti-Chinese sentiment, worsening the public sentiment of the two countries and drawing a backlash from Chinese online users,” the embassy said on February 9.

The somewhat unorthodox use of an embassy to criticize candidates running for office has drawn scorn from Koreans. The Korean government warned the embassy not to interfere in Korean politics after China’s ambassador criticized one of candidate Yoon’s positions.

Yoon responded to the Chinese embassy on February 11 with a statement criticizing both the embassy and the Moon administration’s Ministry of Foreign Affairs for being too docile. It is “ridiculous,” he wrote, for China to “intervene in internal affairs” and criticize politicians in the host country. “Nevertheless,” he continued, “the [Korean] Ministry of Foreign Affairs only issued a brief remark.” The past five years of policy towards China, he said, have been “humiliating.”

Outrage towards China, while growing, still isn’t universally shared, and some in Korea made distinctions between the various component controversies. On the question of the hanbok dress, progressive pundits pointed out that Korean ethnic people around the world all share a claim to the hanbok.

“Hanbok is the clothing of the Korean community that crosses borders and is worn by North and South Koreans,” an op-ed in the progressive Hankyoreh said. Moreover, another article in the newspaper warned that vitriol directed towards China was starting to morph into hate speech directed towards Chinese people, including threats to assault Chinese university students.

The real outrage with the hanbok—and the display of ethnic minorities in general—is not that Chinese might be trying to claim one piece of Korean culture as its own. It is rather the pieces of ethnic culture China is trying to eliminate. They trot out the ethnic garb on these occasions for it to be worn by smiling, dancing minorities, but in the Korean schools in Yanbian (and even worse in the reeducation camps in Xinjiang), the real people who live there are forbidden from speaking their own languages.

I have talked to Joseon-jok people who have told me of their youth growing up in bilingual households, attending bilingual schools. These days, those schools are taught completely in Chinese, a Chinese-born ethnic Korean waitress at a cafe in Cheonan said.

The amount of Joseon-jok immigrating to South Korea has increased since 2000, and now they make up a majority of many of the Chinatowns throughout Korea, but Korean acceptance of Joseon-jok as their fellow countrymen has not increased in tandem. Many Korean films depict Daerim district of Seoul, a major Joseon-jok neighborhood, as “a city of crime,” and Korean-born Koreans warn visitors to “be careful” there.

The Olympics have ended, but the diplomatic spat between China and Korea has just begun, and the ethnic Korean Joseon-jok/Chaoxian-zu who are used as a political cudgel remain being excluded from full participation in the life of both countries.