4 Things That Will Happen If Kim Jong-un Died 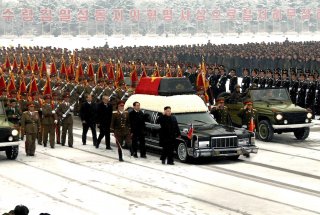 What would happen if Kim Jong-un died suddenly?

Predicting what might happen in North Korea is a tricky business. For good and understandable reasons, analysts have often gotten Pyongyang wrong.  And in this case, the usual analytic challenges are compounded by the fact that this relatively young country has had only two leadership changes since its founding in 1948. A data set of two does not inspire much confidence, literally or figuratively.

Still, on the positive side of the ledger is the fact that North Korea, officially known as the Democratic People's Republic of Korea or DPRK, often seems to follow a set playbook. So, if the past is any guide, what might we expect?

Any mystery will be short-lived.

In the previous two instances of political transition, the government reported the leader's passing via state broadcast within a few days. Any announcement regarding the current leader would likely include details about the composition of the funeral committee. The chair of that committee will provide the best clue as to the new head of state.

The successor will likely be a member of the Kim family.

Recently there has been much speculation about Chairman Kim's sister, Kim Yo-jong, as a possible successor. U.S. officials who have met with the Kims have described a particularly close (but hierarchical) relationship, even in the face of speculation that she has occasionally fallen out of favor.

Still, it is worth noting that DPRK has never had a female head of state.  And if the current North Korean leader were to live a long life, being viewed as a likely successor might not enhance one's life expectancy, as was the case for Kim's half-brother, Kim Jong-nam, who was assassinated in Malaysia in 2017.

Nevertheless, a family member is more likely to be the successor than not, given the fact that DPRK is a monarchy. In addition, it is a monarchy that has grounded its legitimacy in a semi-magical origin story about the god-like qualities of the Kim blood line.

Whoever is chosen is likely to be viewed by outside commentators as an inexperienced figurehead. It is worth remembering that this was precisely what people said about the young Kim Jong-un, when he assumed office in 2011. He would later prove the doubters wrong.

North Korea may be on pins and needles.

Closed, authoritarian states suffering from international sanctions, a recession, and a pandemic might naturally wonder whether outsiders --the US, South Korea, China -- might seek to take advantage of uncertainty during a leadership transition. Absent outright instability and internal conflict, that fear is unwarranted, but it would not be surprising nor irrational for the North to react that way at a moment of vulnerability.

The risk of inadvertent conflict may increase during the early phases transition process, but so does the chance for a diplomatic agreement.

When Kim Il-sung, the DPRK's first leader, died in 1994 amidst a famine, he had already been engaged in negotiations with the Clinton Administration -- talks that were moving in a positive direction. His heir, Kim Jong-il, then took up the mantle of negotiator, in part, because the actions of his father had paved the way. The new leader could rightly frame continued negotiation as acting to fulfill his father's legacy. Those negotiations resulted in the Agreed Framework which closed down the Pyongyang's plutonium reactor and froze its long-range missile tests for a period of some 8 years.

When Kim Jong-in died in 2011, the state of U.S.-DPRK relations was less congenial. Early in Obama's first term, the U.S. president "extended his hand" to the North. Pyongyang returned the favor by testing a nuclear weapon. Not surprisingly, the Obama administration moved on to other pressing issues (the Great Recession, wars in Iraq and Afghanistan, the Iran nuclear program) and shifted to a policy of "strategic patience," that is, largely ignoring the DPRK. Some channels were kept open and there were occasional conversations, but the relationship was decidedly mixed. Nevertheless, the two sides managed within months after Kim's death to negotiate what came to be known as the Leap Year deal. (But it soon foundered over the issue of space launches).

Should Chairman Kim exit early, there may be an opportunity to return to the negotiating table, especially given the North's precarious situation -- one that is likely to deteriorate even further over the near to medium term. Perhaps this is the moment when President Trump's earlier attempts to establish a U.S.-DPRK relationship will pay off. But turning opportunity into progress will require a soft voice and a light touch, qualities the President has occasionally displayed in his dealings with Pyongyang, even as they are rarely displayed in other policy arenas.

Dr. Jim Walsh, Senior Research Associate at MIT’s Security Studies Program, is an expert in international security, and international security contributor to NPR’s “Hear and Now,” broadcast nationally to 425 NPR stations and 4 million listeners a week. Before coming to MIT, he was director of Harvard University’s Managing the Atom project. He is one of a handful of Americans who has traveled to both Iran and North Korea to discuss nuclear issues. His analysis has appeared in the New York Times, the New York Review of Books, Washington Post, and numerous media outlets (70 appearances in 2019).  His recent publications include “Laser Enrichment and the Proliferation of Nuclear Weapons.”