About That North Korea Missile Launch—Was it Hypersonic? 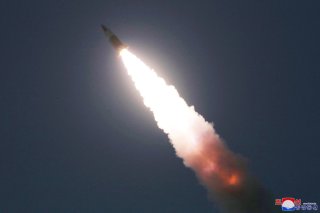 Earlier this week, North Korea carried out its first missile launch of the new year. According to the New York Times, the missile was launched off the east coast of North Korea and landed in the water. The launch was swiftly condemned by foreign governments, including the United States, South Korea, and Japan.

A day later, North Korea is claiming that it fired a hypersonic missile, and stating that the launch successfully met its objections.

According to the Drive, North Korean state media is claiming that the missile that was launched this week used a “hypersonic gliding warhead,” and that the missile was displayed last year at a Pyongyang arms expo.

“In the test launch the academy reconfirmed the flight control and stability of the missile in the active-flight stage and assessed the performance of the new lateral movement technique applied to the detached hypersonic gliding warhead,” the state media report said.

The Drive noted, however, that the “hypersonic” claims might not be entirely true, as hypersonic technology is difficult to crack; even the U.S. has had trouble getting theirs to work.

CNN quoted experts who were skeptical about the hypersonic claims, both when North Korea made them last year and this latest launch as well. Cheong Seong-chang, director of the Center for North Korean Studies at the Sejong Institute, told the network that North Korea “will need at least two or three more test launches in the future to complete its hypersonic missile.”

Joshua Pollack, senior research associate at the Middlebury Institute of International Studies in California, said this week that while North Korea is claiming the weapon is hypersonic, “that doesn't mean it's a novel sort of weapon,” per CNN.

The report added that only Russia and China are believed to currently possess working hypersonic weapons. Hypersonic missiles, which are defined as missiles that fly at Mach 5 or faster, are said to be especially dangerous because of how fast they can go, and also fly at lower altitudes than most other weapons.

Per the AP, hypersonic missiles were an item on a “wish list” shared last year by Kim, along with spy satellites, multi-warhead missiles, and nuclear missiles that can be fired from underwater.

The launch followed a year-end address by North Korean leader Kim Jong-un, in which he vowed to increase the country’s military capability.

“The increasingly unstable military environment on the Korean Peninsula and international politics have instigated calls to vigorously push forward with our national defense build-up plans without any delay,” Kim said in the speech, as cited by Korean state media, via the Associated Press.