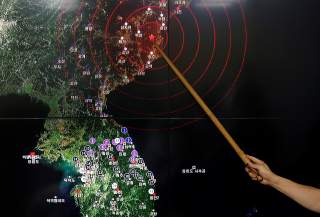 Activity continues in the uranium-enrichment plant at North Korea’s Yongbyon Nuclear Scientific Research Center, according to one think tank.

38 North’s assessment underscores an uncomfortable truth for the United States and its allies. Despite periodic threats and two high-profile summits, U.S. president Donald Trump has not succeeded in convincing North Korean dictator Kim Jong Un to give up his nuclear-weapons program.

“We continue to see activity around the Uranium Enrichment Complex in terms of vehicles, equipment and personnel arriving and departing. Imagery shows what appears to be a white tanker trailer near the far west end of the complex on February 16 or 17 until the morning of March 27, [2019],” 38 North’s analysts wrote.

The truck departed the next day leaving behind a 20-foot cylinder or shipping container next to the nearby gas centrifuge hall. On May 9, a similar tanker trailer had returned to the same location, and a group of more than a dozen personnel were visible inside the courtyard. On the most recent imagery from May 28, the tanker trailer was no longer present, and different personnel were noted within the complex’s courtyard.

Our observation, that periodic material transport (e.g., possibly to deliver liquid nitrogen) has continued at the Uranium Enrichment Complex over time, provides a new indicator that the complex is operational, and therefore that it is also most likely producing enriched uranium.

However, we do not have any definitive means to determine either the actual levels of enrichment or the total production throughput of the ~4,000 centrifuges at this time.

“The Kuryong River runs through the campus, and its water is used to cool the adjacent reactors. Some parts of the site hold administrative and scientific support facilities -- but it's the reactors and other assets which the U.S. eventually hopes to see dismantled.”

The IRT-2000 reactor is the smallest and oldest reactor at Yongbyon. It was finished in 1965 under the supervision of the Soviet Union and originally used low-enriched uranium for scientific purposes and to produce medical isotopes.

Until 1973, the Soviet Union provided the fuel rods to run the reactor, but North Korea later converted the reactor to highly-enriched uranium.

While this reactor cannot produce much fissile material for North Korea, there is some concern that it could produce isotopes like tritium or lithium deuteride using the nearby isotope production laboratory.

Just a few grams of tritium can be used in a warhead to boost its efficiency, thereby allowing for a smaller and lighter design for a missile.

Yongbyon’s five-megawatt reactor, dating from 1986, is it's most famous.

“This reactor produced the bulk of the plutonium for North Korea's weapons, and was at the centre of several diplomatic confrontations and breakthroughs,” Hanham wrote. “Today, it is capable of operation using water from the nearby Kuryong River.”

“The International Atomic Energy Agency has had occasional access to the reactor, depending on North Korea's willingness to allow inspectors in,” Hanham added. “There have been two previous attempts to ‘shut down’ the reactor -- both later reversed by North Korea when relations soured.”