America and North Korea: Are We Headed for a Freeze-for-Freeze Nuclear Deal? 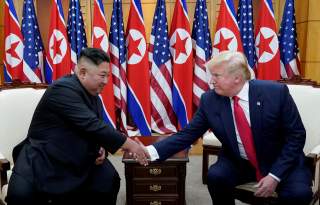 President Donald Trump is nothing but unconventional. On North Korea, Trump saw twenty-five years of failed policy and realized that something significantly dramatic needed to be done if the United States had any chance at addressing the roots of the problem: a cataclysmic chasm of mistrust between Washington and Pyongyang and two positions on the nuclear issue that were seemingly irreconcilable. So, in typical Trumpian fashion, he tossed the rule book in the trash and drew up his own play. Meeting with the North Korean head-of-state, something which would have been blasphemy with any other president, was now a regular part of doing business.

Outside of Trump’s personal relationship with Kim Jong-un, however, the U.S. strategy has remained largely static. Washington is still hoping—maybe even praying—for North Korea’s full and complete denuclearization on the fastest timeline possible. The Trump administration has not been receptive to granting Pyongyang any sanctions relief whatsoever, stressing repeatedly that the North Koreans can forget about more cash in their pockets as long as they remain nuclear-capable. Trump’s eagerness for a big deal during the summit in Hanoi not only signaled impatience to Kim, but guaranteed both sides would walk away empty-handed.

Trump, though, may finally be coming around to the idea that denuclearization is not as easy as he imagined.  The strategy, therefore, will need to be significantly altered.  According to a July 11 report in Yonhap, a source close to White House thinking says the administration is contemplating a bold interim measure to get the diplomatic process off the ground.  In return for the dismantlement of the Yongbyon Nuclear Research Reactor and a nuclear freeze, the United States would offer the Kim regime a 12-18 month suspension on some U.N. Security Council sanctions. The North Koreans would again be permitted to export coal and textiles, two commodities which have served as Kim’s biggest moneymakers. If Pyongyang agrees to keep its end of the deal, Washington would also consider an end of war declaration and the establishment of liaison offices in one another’s capitals. And if the North cheats or violates the agreement, the Security Council would reimpose the sanctions through a snap-back mechanism.

As the source told the South Korean news outlet, “This is important, as it allows the U.S. and the North to test their intentions and build trust, but in a way that furthers denuclearization and sanctions relief.”

There are predictable obstacles along the way.  For one, we can’t be certain Trump’s entire national security team would be sympathetic to this outline. National Security Adviser John Bolton, a man who has made a living lecturing about the dangers of negotiating with America’s adversaries like a southern baptist preacher spreads the word of the gospel on a Sunday, will do everything in his power to kill an interim initiative such as this. Bolton, after all, built a legal case for U.S. preventive strikes on North Korea in the pages of the Wall Street Journal shortly before he was tapped by the president to take over for H.R. McMaster. It’s almost comical to think Bolton would sit back and allow concessions to be provided to the very regime he wanted to bomb just a year and a half earlier.  If Trump wants to see a step-by-step strategy succeed, he is going to have to protect Stephen Biegun from being undermined and be willing to take action if somebody on his staff freelances.

There is also the devilishly difficult matter of implementation. If an interim deal such as this is to work, international nuclear inspectors will need to be on the ground, prowling over every inch of the massive Yongbyon facility every day of every week over the next 12 to 18 months. This will entail a whole different set of negotiations about access; whether inspectors will be able to question North Korean nuclear scientists during their tours; and how quickly potential violations can be brought to the Security Council.  All of these items will need to be baked into any agreement.

But a freeze-for-freeze deal as described in the Yonhap report has its virtues—the most vital being injecting some life into a diplomatic process President Trump helped revitalize with his trip to the DMZ in June.

What the U.S.-North Korea talks desperately need right now is forward momentum, more reciprocity, and a far greater focus on peace.  Any package that moves the ball down the field should be supported.