America Must Lead on Sanctions Relief for Coronavirus-Stricken North Korea 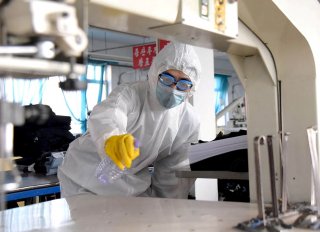 Land, sea and air border crossings to the hermit kingdom have closed as of late February. A senior official of the Ministry of Public Health stated the intent to maintain closed borders until diagnosis and treatment capabilities are developed.

According to state media, 10,000 North Korean citizens have been placed into isolation and currently roughly 2,300 are under quarantine as of this week. 7,000 North Koreans returning from overseas are subject to a forty-day isolation followed by an additional thirty-day medical observation period. Also, foreign visitors previously in the county are subject to thirty-day.

North Korea has one of the world’s least-prepared public health systems for dealing with an infectious disease outbreak. Based on the joint Johns Hopkins Global Health Security and Nuclear Threat Initiative’s 2019 Global Health Index, North Korea ranks 193 in preparedness against outbreaks compared to South Korea, which ranks 9th. The nation has limited diagnostic capability and hospitals lack disinfectant and anesthesia. After a collapse in the nineties of the medical system due to economic stress, Kim has attempted to modernize their health systems. However, hospitals and infrastructures improvements are limited to major cities and there is a lack of trust by the public.

The Impact of Sanctions

Additionally, sanctions have hampered North Korea’s response to COVID-19. The UN High Commissioner for Human Rights Michelle Bachelet noted sanctions “impeded” North Korea’s ability to battle COVID-19. On March 24, she stated, “At this crucial time, both for global public health reasons, and to support the rights and lives of millions of people in these countries, sectoral sanctions should be eased or suspended.” She stressed the global implications, noting, “In a context of global pandemic, impeding medical efforts in one country heightens the risk for all of us.”

Limited sanction relief by the UN 1718 Sanctions Committee is underway as a fast track response to the pandemic. On March 12, the Swiss Agency for Cooperation and Development’s Swiss Humanitarian Aid was granted an exemption to bypass sanctions to aid North Korea in “ongoing measures to prevent the spread of COVID-19.” The aid organization is granted permission to send disinfection kits and 2,000 sets of personal protective equipment (PPE) for medical work.

The U.S. State Department offered assistance and noted deep concern about the “vulnerability” of the North Korean population to COVID-19. President Trump also wrote to Kim Jong-un to express a willingness to engage. The U.S. offer has not been accepted to date. Calls for greater sanction relief from the international community as well as by the House of Representatives is increasing. While the formal lifting of sanctions designed to constrain problematic regimes is inadvisable, a nuanced approach—including exemptions for and fast tracking of medical equipment and supplies—is vital to public health. The impact of sanctions will become increasingly deadly and counterproductive to the colossal global public health effort to stop the coronavirus from spreading.

This is a key test for U.S. regional leadership in advancing international efforts to contain the pandemic. Sanctions relief will likely grow as international issues such as North Korea’s COVID-19 infection rate grows. China and Russia have expressed skepticism of the efficacy of sanctions and will likely press further in seeking sanction relief.

With globalization, the world is more interconnected and less static. In the resulting grayzone, a middle path must be struck to ensure sanctions against North Korea do not hinder the global response to the COVID-19 pandemic.