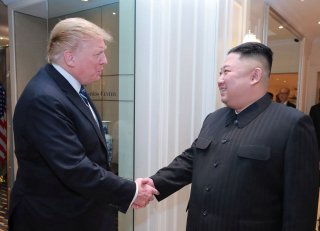 As has been noted for many months, the Trump Administration’s comically over-produced and substantively underwhelming attempts at nuclear diplomacy with North Korea have yielded no real results. If there weren’t so much at stake, it would almost be funny that the people who criticized the Obama Administration’s supposed doctrine of strategic patience have been all but silent about what can generally be described as haphazard inaction.

With its latest warning of payback and “actual horror and unrest,” the North Korean regime is making it clear that their patience has worn thin. At the same time, to paraphrase a line from the classic movie Fatal Attraction, North Korean leader Kim Jong-un won’t be ignored. The country conducted a series of short-range missile tests in March and is undoubtedly continuing to refine its nuclear capabilities.

Despite the lack of progress, the Trump Administration continues to insist on a maximalist—and as of yet, poorly defined — demand of complete, verifiable, and irreversible disarmament. Any gains from President Trump’s unorthodox decision to meet with Chairman Kim have now effectively been lost, if not wasted. The task has also just become monumentally harder, as the Trump Administration now has to manage the challenge of the North Korean nuclear threat in the midst of a global pandemic.

President Trump recently sent a letter to Chairman Kim offering COVID-19 assistance, perhaps as an attempt to rekindle a relationship that has soured. That was a minor positive step, but according to the North Koreans, it was immediately undermined by comments from Secretary Pompeo about maintaining pressure on the regime. It is past time for the administration to commit to the only reasonable path away from potential disaster: the continuation of, or—more accurately—the commencement of nuclear negotiations in earnest. Such an effort would require four key steps.

First and foremost, the administration has its hands full with its COVID-19 response, but it must save some focus for this problem. Now that Steve Biegun is the Deputy Secretary of State, it only stands to reason that someone else should have the lead on day-to-day North Korea work. Senior leaders that assisted Biegun as the Special Envoy for North Korea have moved onto other roles. There is no confirmed Under Secretary of State for Arms Control and International Security or Assistant Secretary of State for Arms Control, Verification and Compliance. Both positions would aid in the negotiation and implementation of any nuclear agreement with Pyongyang. As has been stated by many people on many occasions over the last three-plus years, the Trump Administration simply must properly staff the government. If outside political appointees are not available, then qualified foreign service officers and civil servants must be appointed and empowered.

Next, it will be necessary to figure out ways to negotiate with the restraints posed by the ongoing pandemic. That means using or creating means of secure audio and video conferencing. It is not clear what current assets and technologies could enable such exchanges. If none exist, work should begin on building such capabilities without any further delay. Secure conferencing would be useful with other ongoing U.S. diplomatic efforts and challenges, as well. Parties can exchange working documents to supplement secure video and audio exchanges. The United States can also practice what is sometimes called “megaphone diplomacy.” By putting some of its metaphorical cards on the table through publicly stated specific goals and aspirations, the United States could create some new incentives or pressure on North Korea. While this method is generally avoided in negotiations, all options must be considered in these trying times. It will also require that the Trump Administration speaks with a single message on this matter, something that they have yet to accomplish.

Further, the Trump Administration should keep in mind that activities related to COVID-19 can affect negotiations with North Korea in positive and negative ways. For example, potential U.S. aid or sanctions relief related to North Korean pandemic response could create more trust and good will. Such an improvement could create space for more fruitful negotiations. On the other hand, attempts to demonize China—deserved or not—over its early response to COVID-19 could make things more difficult. Whether the United States likes it or not, any viable nuclear deal will require coordination and cooperation with Beijing.

Finally, the United States needs to be realistic about what is possible right now. No matter how many times Trump officials state the need for complete, verifiable and irreversible dismantlement of the North Korean nuclear arsenal, words will not make it happen. It is a goal that simply cannot and will not be accomplished in the short term. Even if such a deal could be negotiated, on-the-ground inspections that would help verify such an agreement may not be possible for the foreseeable future. While many experts have long posited that incremental and achievable steps should be the focus of negotiations with North Korea, the outbreak of COVID-19 has made such steps the only option.

Over the last three years, the Trump Administration has pivoted from the brink of war with North Korea to a path of unorthodox but potentially promising diplomacy. The inability to be flexible, creative, or realistic has eaten up months and months of valuable time and led the administration right back to an unstable and potentially volatile state of affairs. President Trump would no doubt prefer that Chairman Kim simply wait for the worldwide pandemic to subside before engaging in new threats, weapons testing and possible provocations. The world would probably prefer that, too. Unfortunately, North Korea can and will continue to operate in its own self-interest, even to the detriment of global security. That leaves the United States with no choice but to try to change their interests. That means showing them, over the course of the next months and years, that they can meet their security needs without nuclear weapons. The only way to do that is through an unprecedented, and for the time being, socially distanced diplomatic effort. It is not an enviable task for the Trump Administration, but it is their solemn responsibility nonetheless.