Biden: ‘Nothing Much Changed’ Despite North Korea Missile Launch 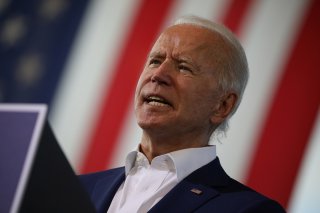 President Joe Biden appeared not to be overly concerned with North Korea’s launch of short-range missiles off its west coast on Sunday.

“We’ve learned nothing much has changed,” he told reporters on Tuesday before boarding Air Force One, adding that Kim Jong-un regime’s actions weren’t considered to be a provocation.

He later said in Washington: “According to the defense department, it’s business as usual. There’s no new wrinkle in what they did.”

The president’s senior officials also noted that the weekend launch was not in violation of UN Security Council (UNSC) resolutions.

“We’re also aware of military activity last weekend by DPRK that is not sanctioned under UN Security Council resolutions, restricting the ballistic missile program,” one senior administration official, who did not wish to be named, said in a press briefing.

“We do not publicly respond to every kind of test. What I think (we) are trying to underscore for you is that this is a system that is not covered by UN Security Council resolutions,” a second administration official said.

The officials added that the UNSC resolutions cover “almost every kind of missile and nuclear activity,” but the short-range missiles launched by North Korea did not fall into that particular category.

“And so because this does not, it probably gives you an indication of where it falls on the spectrum of concern,” one official said.

“It is a normal part of the kind of testing that North Korea would do. We do not believe that it is in our best interest to hype these things in circumstances.”

Last week, U.S. Secretary of State Antony Blinken acknowledged that the United States will utilize both pressure and diplomacy and will have an “open mind” when shaping its overall policy on the reclusive country.

“We’re looking at everything. … There (are) different kinds of pressure points that might convince North Korea to make progress, and we are looking at diplomacy, and what different types of diplomacy might take,” he said during a virtual roundtable session with local reporters in Seoul.

“The goal is to really figure out how we can have the best chance in resolving the challenges posed by North Korea to us and unfortunately to its own people. … We have a very open mind about it and that open mind is being informed by allies like South Korea,” he added.

The senior administration officials noted that Biden’s policy review on North Korea is now in its “final stages.”

“We are in the final stages of that review, and next week we plan to host the national security advisers of Japan and the Republic of Korea to discuss the outcomes and other issues,” they said.