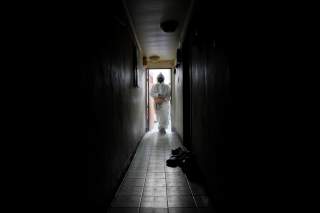 Local authorities will be loath to admit it, but South Korea has contained its first large-scale coronavirus outbreak. This outbreak began in the city of Daegu, centering on the infection of 5,011 members of the Shincheonji religious group. Along with another 347 cases infected through secondary contact, the Daegu outbreak accounts for a staggering two-thirds of all Korean COVID-19 cases.

I call this outbreak South Korea’s “first” because there will likely be additional outbreaks. One can always hope future events will be limited to small, isolated clusters (like the Sindorim call center cluster in Seoul) but odds remain high that another major outbreak will occur, comparable in size to Daegu. Many challenges will lie ahead regardless, for South Korea and other countries, as the world begins its fight against the pandemic.

Let’s start with the positive. As I write this article, Daegu has a population of 2.4 million and 6,066 confirmed cases. Busan, the city where I live, has a population of 3.4 million and only 107 cases. This is despite Busan being a mere hour train ride away. Ulsan, even closer to Daegu (thirty minutes by train), has a population of 1.2 million and twenty-eight cases. With the movement of people between cities having been reduced but not restricted, these numbers strongly suggest local authorities have succeeded in containing the virus and limiting its spread out of Daegu.

Another favorable indicator is the decreasing rate of new cases. At its five-day peak, there was an average of 590 new cases per day nationally. Over the last five days, this figure has dropped to ninety-six. The number being tested has also decreased, from a high of over thirty thousand per day to less than fifteen thousand now. With over a quarter of a million tested in total, these numbers also suggest containment is working since we know the decrease in testing is not due to a lack of test kit availability.

How South Koreans Did It

The information must quickly and accurately communicate the locations of newly contaminated environments. This allows people to avoid those locales and make informed decisions about whether to be tested. In South Korea, the locations traversed by newly diagnosed patients are revealed in real-time through government websites and text messages. This information contains the names and addresses of everything from eateries to malls to churches. Even buses and subway lines are included along with the approximate times of visitation so people can quickly decide whether they might have been at risk. Not only does this information promote transparency about what the government is doing, but it also allows virus testing to focus on those most likely to be infected.

Transparency has little use, of course, unless there is an effective testing program. This is the critical step where the United States, along with a host of other countries, appears stranded. Red tape, conflicting regulations, faulty manufacturing, inadequate facilities, and funding cuts all seem to have contributed to confusion and delay, wasting precious time as the virus continues to spread unseen. Contrast this with what happened in South Korea, where four companies were given approval within a week at the very start of the outbreak to begin manufacturing over twenty-thousand kits per day. Mobilization of the kits has been rapid, too, with the military helping to distribute them daily to 118 test centers across the country, spread over an area roughly the size of Indiana.

The final piece to effective containment is consistency. In South Korea, there is a single unified protocol: if any location is contaminated, it is immediately closed and sterilized, with all associated people required to undergo testing and quarantine. Here too, the United States and other countries seem to be confused and uncoordinated. My colleagues and I cringed when we saw the news from New Rochelle, where schools within the containment zone were being closed but some children were still being allowed to attend classes in a neighboring township. As other media outlets have already noted, children may not get sick, but they are very likely to act as carriers, allowing the virus to escape containment. From the very start, South Korea has been consistent in its procedures, closing all schools and sporting events regardless of their proximity to sites of infection.

With other countries now having their own outbreaks, I think South Koreans would, if they could, close their borders and hold out until a vaccine is ready. Unfortunately, over 45 percent of Korea’s GDP is, in some fashion, dependent on exports. This means isolation would lead to massive job losses and bankruptcies.

Imports are no less critical. About 76 percent of all grains consumed in South Korea are imported, meaning isolation would result in eventual starvation. With the global pandemic only now beginning, a final tally of economic damage remains undetermined. A lot will depend on how quickly other countries recover, with the foreign purchase of South Korean products being just as important as domestic consumption.

Public fatigue is another important challenge. Since the borders will need to stay open as much as possible, the Korean public needs to prepare for a long campaign of alertness. Foreigners will inevitably bring the virus in and local authorities will need to respond accordingly. Given the way things have calmed down this week, a constant state of high emergency seems unlikely, but a steady need for vigilance extended over many months or even a year is not unrealistic.

The patience and resilience of the Korean public will be tested, but so too will the residents of other nations. At some point, most countries will likely need to find money to keep their citizens from losing jobs due to global stagnation and inactivity. Luckily, Korea only has a government debt-to-GDP ratio of 40 percent, one of the lowest in the world, meaning it can dig deep to finance temporary commitments. Other countries, like Japan (238 percent) and Italy (135 percent), unfortunately, won’t be nearly as flexible.

There are two important downstream possibilities for a failed virus containment effort. The first is the inundation of the healthcare system. Current information indicates roughly 15 percent of all infected people will require treatment for severe respiratory symptoms. Prognosis is not good when treatment is unavailable, leading to a significantly increased mortality rate. This is another reason why early containment is so important: it helps reduce hospital patients to a manageable number. Korea has been lucky so far, being able to keep this number low and maintain a mortality rate of only 0.9 percent. Reports from Italy, unfortunately, suggest their system might already be overwhelmed, with a mortality rate of 7.3 percent.

The second possibility is civil unrest due to a lack of necessities. If entire countries or provinces become paralyzed by outbreaks, disrupted supply chains might affect the availability of food. Although there is no indication yet that this will happen, countries would do well to study their vulnerabilities in advance. Korea, for example, receives a plurality of its grain imports from China. If a renewed bout of the virus were to paralyze Chinese agriculture or prevent exports for an extended period, then there would be profound consequences on South Korean sustenance. These problems don’t seem likely but every country would be wise to plan ahead, nonetheless.

Justin Fendos is a professor at Dongseo University in South Korea.