Can Biden Save South Korea’s Unpopular President From Himself? 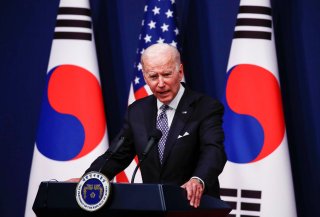 On March 9, Yoon Suk-yeol, the Conservative Party’s candidate, was elected as the thirteenth president of South Korea with the closest margin in the country’s history. He won 48.56 percent of the vote, while the opposition candidate received 47.83 percent. In his inauguration speech, he promised to promote liberal democracy—“the government of the people, by the people, for the people.” However, he quickly failed to fulfill his promise. According to a Korean Gallup survey, his approval rating fell to 32 percent in the second week of July.

This occurred only two months after his inauguration; no other president has ever performed worse than Yoon so quickly.

On the one hand, Washington should be alarmed by the unpopularity of the South Korean president due to its potentially unfavorable foreign policy implications. On the other hand, Washington should not be concerned about Yoon’s low approval rating as long as he tries to make his best effort to do better by listening to the people’s voices. However, thus far, Yoon has dismissed the problem, reportedly saying that “the low approval rating means nothing to me.”

Yoon appears not to comprehend the fundamentals of democracy because his only job experience was prosecuting criminals for twenty-seven years. He performed well in his unelected position by sorting out bad guys from good ones. However, this black-and-white thinking does not work well in a democracy where he must compromise and cooperate in response to people’s voices and approval. He must understand that his low approval rating can drastically undermine his political legitimacy to rule the country.

Two groups—the people and the military—might challenge Yoon’s political legitimacy if he cannot save himself from the abyss of disapproval. In case these two groups successfully challenge him, Washington must prepare a contingency plan of how to preserve peace on the Korean Peninsula, a location that is vital to America’s security interests.

If the people take to the streets to protest Yoon’s wrongdoings, a power transition is likely to occur, and thus a progressive president will occupy the Korean White House. The consequence will be a dramatic shift in Korean foreign policy. A progressive president will try to negotiate security terms with North Korea and China but hesitate to make a military alliance with Japan due to historical antagonism.

The chances are that the people will confront Yoon since the majority perceive him to have become an illegitimate leader. A Korean Gallup survey shows that negative views of Yoon gained more ground every week and exceeded more than 50 percent in mid-July. On July 18, a survey by Realmeter, which predicted the 2022 presidential election more accurately than the other polling companies, revealed that 63.3 percent of respondents rated him negatively.

First, many people believe that Yoon abused his appointment power to create a prosecutor-backed presidency. As a former prosecutor-general, he claims that he chose his men from the pool of elite prosecutors. However, his favoritism led him to fill major offices with former or incumbent prosecutors who have no particular skills, competence, and expertise. A few examples include the Executive Office of the President, the Department of Unification, the Department of Veterans Affairs, and the Financial Supervisory Service.

Even when Yoon appointed his few secretaries with no prosecutorial experience, many people were frustrated with his choices. For example, Yoon put a professor from his alma mater in charge of the Department of Social and Education. He made this appointment despite the fact that the professor was arrested for drunk driving and violated publication ethics multiple times. He chose to ignore the uproar of many concerned citizens.

Second, many people notice that Yoon is too incompetent to perform his job. On one occasion, he reportedly was too drunk to convene the National Security Council. He was supposed to respond to security concerns when North Korea fired ballistic missiles. On another occasion, he went to a mud festival when he should have held a meeting on how to tackle the increased danger of new Covid variants. On another occasion, he rode on the presidential jet with personal friends of his wife, although they had no official business accompanying him to the NATO Summit last month. He mixed his personal and professional life to make his wife happy.

If the military revolts successfully, it is likely to install a military regime that replaces all prosecutors in government posts with soldiers. Although the new regime’s security interests will overlap with America’s, it will put President Joe Biden in a difficult position—whether to support a military dictatorship. In the worst-case scenario, the president must abandon one of the cornerstones of America’s grand strategy—the promotion of democracy.

The chances are that the military will knock Yoon out of power because it perceives him to have strained civil-military relations.

First, during his presidential campaigns, Yoon asserted that he was exempt from military obligation due to anisometropia. However, many soldiers suspect foul play, as his eye problem was diagnosed by a doctor, his high school classmate, only during the military draft period, but not during his leisure time as a semi-professional billiard ballplayer. Since many soldiers perceive Yoon as a draft dodger, they are reluctant to endorse him as the commander-in-chief.

Second, many soldiers are aware that Yoon jeopardized national security when the president-elect ordered the Korean Pentagon to be emptied in twenty days without any consultation and converted it into the new Korean White House. Soldiers believe that the reason behind the building eviction was Yoon’s superstition rather than any long-term military strategy. Yoon’s impulsive office relocation has destabilized the existing defense resources and infrastructure and lowered the morale of soldiers.

Third, many soldiers were infuriated when Yoon appointed a retired three-star general as his secretary of defense. Soldiers believe that, for political reasons, Yoon broke the tradition of appointing a retired four-star general to the position. Soldiers ponder that Yoon favored the three-star general because he joined Yoon’s presidential campaigns, not because the general had exceptional military knowledge and experience. More problematically, the new defense secretary started to politicize the military by replacing seasoned soldiers with his close friends, regardless of their skills, abilities, and accomplishments.

Due to his misconduct, Yoon has too quickly become a liability to Washington. Biden should have a serious talk with Yoon and nudge him into not acting like a president who won a landslide victory. If Yoon refuses to listen, Biden must consider an alternate plan of how to minimize America’s security risks on the Korean Peninsula before the Korean government is toppled by its people or soldiers. Otherwise, South Korea will be out of control.