Can China Bring North Korea Back to the Negotiating Table? It Depends 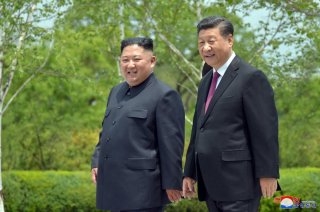 Since the Biden Administration took office, Washington has impressively changed its policy toward North Korea. The White House declares it will not adhere to Trump’s “grand bargain” tack, and will also step back from Obama’s “strategic impatience”. Biden’s policy toward North Korea could strike sequential negotiation in workable terms with Pyongyang to realize denuclearization in the Korean Peninsula. A new show of resilience from the White House would necessarily reopen the door to a diplomatic solution of nuclear dismantlement of North Korea. There is no question that Beijing sincerely favors President Biden’s new approach to the Democratic People's Republic of Korea (DPRK).

From the beginning, China was fully opposed to any “grand bargain” -based policy option towards North Korea. Beijing has been convinced that North Korea, long and severely stuck in extreme international isolation, domestic gloom, and ultimately the powerful grip of an autocratic family would be completely unlikely to hand over its nuclear amulet in exchange for American embrace and sanction lifting. Nuclear weapons are the only reliable bargaining chip that Pyongyang could play up. President Obama’s policy choice of “strategic patience” actually slapped down the potential for negotiation and preferred to wait and see until the DPRK melts down with heavy, suffocating sanctions. However, uncertainties will surge over any long-protracted North Korea policy as China is afraid that either DPRK’s pickup of the brinksmanship or its possibility of domestic implosion would bring about huge uncertainties. These include North Korea’s nuclear unsafety, chilly spill-over of its domestic “levee failure”, and even massive military conflict between the North and South. Therefore, China's top concern regarding North Korea is that its domestic transition would pose great risks to China while its denuclearization would be phased in without causing any forms of dam collapse overnight.

Back to the Six Parties Talks between 2003 and 2008, Beijing had been quite in high profile in its insistent on the principle of “action to action” and “promise to promise”, meaning a gradual phase-out of nuclear weapons by the DPRK. Its policy of realizing denuclearization of the DPRK in this regard has barely changed since then. In other words, Beijing still prefers a step-by-step approach to fulfill denuclearization in the Korean Peninsula. Thus, China’s role in bringing North Korea back to the negotiation table depends on whether or not the international community could achieve some convergence in handling the North Korea factor.

Washington must not underestimate the productive role Beijing could play in starting up new negotiation with North Korea. First of all, proclaimed “strategic competition” between the United States and China would hardly reverse Beijing’s geostrategic assessment of the DPRK effect in East Asia. There is no way China could return to its previous policy during the Cold War as Beijing tried to keep Pyongyang within its arms. Geopolitical complexity on the Korean Peninsula has never been more pronounced: China is firmly betting on better relations with Seoul rather than with Pyongyang as the China-ROK (Republic of Korea) relationship has much outweighed China-DPRK relations. Despite Beijing’s unwillingness to crack down on North Korea, it is quite clear that the DPRK will be waning down sooner or later.

Secondly, China is quite clear about the reality that the nuclear dismantlement of North Korea would always strengthen, rather than loosen, the U.S.-centered military alliance system in Northeast Asia. A nuclear DPRK is never any form of “report card” of China’s geostrategic gaming in the region.

In conclusion, the revitalization of China’s productive role in bringing the DPRK back to negotiation talks rests on whether negotiation could include China. The bilateral and trilateral talks between the United States, South Korea, and North Korea might be engineered. But the resumption of the four-parties talks among the U.S., China, and two Koreas should be under sincere reconsideration.

Zhu Feng is a Professor and Executive Dean at the School of International Studies at Nanjing University.