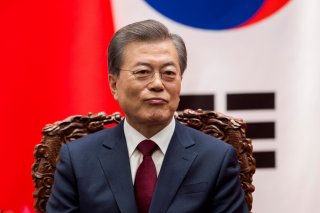 South Korea never signed the Korean War Armistice Agreement in 1953, as then-President Syngman Rhee still insisted on retaking the entire Korean Peninsula. Attempts at reaching a formal peace agreement failed at the 1954 Geneva Conference (attempts at creating a peaceful settlement in Indochina, the other issue on the agenda, didn’t go much better). Four summits between South and North in the three decades of the twenty-first century resulted in statements and flimsy agreements but nothing that came close to producing lasting peace. When former South Korean president Kim Dae-jung and former North Korean leader Kim Jong-il met in 2000, North Korea had no functioning nuclear weapons. Now they are estimated to have between thirty and forty and could have two hundred in five years. Can Moon do what so many before him have failed to do?

Moon follows in a line of progressive presidents, starting with Kim Dae-jung, who felt that “sunshine” would warm North Korean attitudes towards the South. Roh Moo-hyun endorsed Kim in the 1997 presidential election, briefly served in a ministerial post, and was nominated by the Democratic Party of Korea as Kim’s successor. Moon served as Roh’s campaign manager for his successful election campaign, stuck with him through his impeachment, arguing the case for his acquittal in front of the Constitutional Court, and helped plan Roh’s 2007 10.4 Inter-Korean Summit.

Roh and North Korean regime leader Kim Jong-il signed a “Declaration on the Advancement of South-North Korean Relations, Peace and Prosperity,” with strikingly similar language to the declarations of 2018 and 2019, but he came up short on his goal of a peace declaration. Roh was never on the same page with the United States. The U.S. position, as articulated by George W. Bush at a press conference taking place during the APEC summit, was, “That [the Korean War] will end … when Kim Jong-il verifiably gets rid of his weapons programs and his weapons.”

This disagreement over order has been one of the major issues at the summits between Donald Trump and Kim Jong-un. North Korea demands that sanctions be lifted first, while the United States demands that verifiable steps be taken towards denuclearization.

The Moon administration, like the Roh administration before it, views a declaration of peace as an initial step towards getting serious negotiations started. Korean conservatives tend to side more with the American position that North Korea should not be trusted too easily and that a declaration should be an end goal.

This schism between Korean progressives and conservatives on the idea of a declaration was on display at a debate between the two leading presidential candidates’ foreign policy advisors on November 30. Korea University Graduate School of International Studies Professor Kim Seong-han, who advises conservative candidate Yoon Seok-youl, said, “In order to bring about an end of the war, North Korea must give up its development of nuclear weapons.”

Former Korean Ambassador to Russia Wie Sung-rak, who represents the progressive candidate Lee Jae-myung, called a declaration “one part of the peace process,” which would “achieve a virtuous cycle advancing the conditions for denuclearization.”

Moon administration officials have also described a declaration of peace as a beginning step with highly symbolic value. “By putting an end to the Korean War, our government intends to commence the process of making irreversible progress in denuclearization and turning the abnormally long armistice into a peace regime,” First Vice Foreign Minister Choi Jong-kun said on November 15.

“This doesn't mean a legal, structural change in the current armistice regime, including the UNC's (United Nations Command's) standing,” Foreign Ministry Spokesperson Choi Young-sam said in an attempt to allay fears that such a declaration would harm South Korean security and alliances.

But, critics ask, if such a declaration of peace would be non-legally binding and would result in limited material changes, then what is the point?

Yoon Sukjoon, a retired Navy Captain and senior fellow at the Korea Institute for Military Affairs, wrote in an article for The Diplomat, “Such a statement seems unlikely to achieve anything substantive, however, and the United States has been reluctant to go along with Moon’s plan.”

Disagreements over the legal implications of ending the war could lead to disputes about the interpretation of a declaration. “An immediate concern is that people have different understandings of its significance. Some see a declaration as a non-binding political statement, while others conflate it with a formal peace treaty that would dissolve the Armistice Agreement,” Frank Aum, a senior expert on Northeast Asia at U.S. Institute of Peace, said in an interview with the National Bureau of Asian Research.

“[I]t will be very difficult to separate the symbolic part of the end-of-war declaration from its legal or substantive meaning,” said Woo Jung-yeop, a research fellow at the Gyeonggi-based Sejong Institute, also speaking with the National Bureau of Asian Research.

But Aum sees it as “a risk worth taking” given the lack of progress through other means. He emphasized that bilateral engagement would be key: “If it doesn’t include DPRK buy-in and is not accompanied by a process and immediate bilateral concessions, it would fizzle out quickly.”

The status of American forces may come into question. “[T]he DPRK (or China) would take advantage of a declaration. They could argue that the UN command is no longer necessary or legitimate after an end of the war has been declared,” Woo said.

Bruce Klingner, a senior research fellow on Northeast Asia at the Heritage Foundation, argued in an op-ed that even a symbolic declaration could have real negative consequences “by creating a false sense of security. Declaring peace prior to addressing the real threat to peace—North Korea’s nuclear and conventional forces—could generate domino-effect advocacy for prematurely reducing U.S. deterrence and defense capabilities that protect America’s allies in the region.”

That is also the position taken by People Power Party (PPP) candidate Yoon. At a Q&A session with the foreign press in November, he said, “If it comes … it will weaken the UN Command Office in Korea and related military bases in Korea. … If that is achieved, there will be growing voices calling for the withdrawal or reduction of U.S. forces in Korea.”

The Democratic nominee Lee, on the other hand, who sees himself as carrying on the mission of Kim, Roh, and Moon, said an end of war declaration “can’t be stopped and shouldn’t be stopped.” He argued, “Judging based only on the current situation, I believe the current policy of appeasement is proving to be more effective than a hard-line confrontational policy or sanctions policy.” (Both Lee’s and Yoon’s statements were filtered through interpreters.)

Lee, who has been emphasizing Japan’s colonial history during his campaign, also tied opposition to a peace declaration with support for Japan’s interests: "I believe Japan's political circles could make such claims (against the declaration) because that would be in Japan's national interests. But from our perspective, we have to clearly turn the state of armistice into an end-of-war state and go beyond a peace treaty to co-exist and develop into a mutually beneficial relationship of co-prosperity.”

While the declaration of peace is subject to the influences of multiple countries, Japan is actually a minor player compared to the two Koreas, the United States, and China. South Korean officials have been meeting with both American and Chinese counterparts to try to get buy-in.

Cato Institute Senior Fellow Doug Bandow made the case for such a declaration being in America’s national interest. “The United States does have a strong incentive to negotiate with the North since the alternative, an updated form of ‘strategic patience’ ignoring Pyongyang’s activities, is not an option,” he wrote in October. Given the rate at which North Korea is advancing its nuclear weapons program and the failure of any other measures, a peace declaration is the best option.

Moreover, the argument that it would necessarily result in the withdrawal of U.S. troops from Korea is unconvincing, he argued, given that U.S. troops remain in Germany and Japan to this day.

But, as Yoon Sukjoon sees it, each country involved has a different understanding of a peace declaration and wildly different goals about it. South Korea wants to use the declaration to spark negotiations with the North, but it is also a “personal indulgence by Moon in advance of his retirement,” Yoon said. North Korea wants “an easing of sanctions without having to give ground on denuclearization.” China is fine with maintaining the status quo, but they also benefit from the Moon administration’s friendliness as it seeks to win Chinese support, and they may use the declaration to argue for the removal of U.S. troops and weapons systems. The U.S., by contrast, seeks to “devolve more responsibility onto South Korea” and “align South Korean foreign policy more closer with its own in its struggle to contain China.”