Can South Korea Safely Hold Elections During the Coronavirus Pandemic? 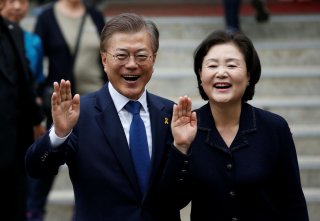 Since the outbreak of the coronavirus, elections have posed a complicated challenge. Hungary’s parliament, for instance, recently passed legislation that gave its prime minister the right to rule by decree (with no end date) and canceled all elections. Nagorno-Karabakh (the Republic of Artsakh) went ahead with its first round of in-person elections at the end of March. Many voters reportedly wore masks and had their temperatures taken before entering polling stations, but also ignored social distancing rules. And while there have been calls to postpone the second round of elections, it is scheduled for April 14. In the United States, poll workers in Florida tested positive for the virus following the state’s primary, which led to at least 15 other Democratic primaries being delayed, and the Democratic National Convention being postponed until August. Protests and a shortage of poll workers have plagued other U.S. states that have decided to move forward with their primaries, raising expectations of low voter turnouts.

Striking a balance between designing and enforcing pandemic containment measures and continuing with an electoral process, which inherently encourages mass participation and gatherings, is no easy dilemma. The European Union and Organization for Security and Cooperation in Europe have expressed concerns about Hungary and other European nations going too far, potentially undercutting democracy and suppressing free speech under the guise of combating the virus. Therefore, as South Korea’s national assembly election quickly approaches, its success or failure may have significant implications for the conduct of future elections amid or even after this pandemic.

South Korea has been hailed as one of the most successful countries in containing the first wave of coronavirus infections. Thanks to the Moon administration’s approach of “testing, tracking, tracing and treating,” the country was able to “flatten the curve” of infection rates without completely shutting down. Strong and decisive leadership, quick mobilization of resources, and an informed public with past experiences with epidemics—which helped them internalize the severity of the situation early on—all contributed to the country’s success. In recent weeks, the number of new cases has remained under 150 per day since its peak in late February, and President Moon’s swift actions have caused his approval ratings to rebound. But South Korea’s battle with COVID-19 is far from over.

As South Korea offers advice, test kits, and other aid to countries around the world now struggling with the pandemic, sources say the government is still testing around 16,000-18,000 people per day, and continues to impose stricter social regulations. In response to “imported infections” from overseas, for instance, authorities have now mandated a two-week quarantine of all arrivals, regardless of country of origin, along with testing on arrival of anyone with symptoms. Refusing testing or quarantine mandates can lead to denial of entry into the country or deportation of those who are caught violating quarantine measures. Towards continued domestic travel of infected Korean nationals and churches that still insist on hosting in-person services, the administration has adopted a “zero-tolerance policy,” with violators subject to jail time and fines. As new cluster cases continue to emerge, the subways in Seoul have reduced their hours to better curb the spread of the virus, schools will begin remotely later in April, and the annual college entrance exam has been delayed to “brace for a possible prolonged pandemic.” The government even extended an intensive social distancing campaign, which began on March 21 and was scheduled to end on April 6, an extra two weeks. That included banning “religious, sports and entertainment gatherings” and urging high-risk facilities to close.

Amid these increased containment measures, preparations for the election next week continue to move forward. Measures planned for the roughly 14,000+ polling stations around the country include increased disinfection of the polling stations and ballot stamps, and setting up “makeshift polling booths” for voters with symptoms on election day. Guidelines issued by the National Election Commission encourage voters to wear protective masks and keep a distance of at least one meter when casting their votes. They also define voting procedures, requiring temperature checks upon entrance into the voting stations, followed by hand sanitation and wearing plastic gloves to cast their ballots. Yet despite these planned efforts to keep voters safe at the polls, experts foresee a lower than usual voter turnout.

With one week until the election, a multitude of factors stemming from COVID-19 could impact election results. Most notable is the fear of infection, which could cause voters to forgo casting their ballots to avoid crowded polling places. Other considerations include the government’s controversial decision to halt absentee voting for an estimated 87,252 Koreans living abroad. Additionally, while a mail-in ballot option was established for the nearly 4,000 voters with COVID-19, who are either being treated in healthcare facilities or mandated to a two-week quarantine, it was only valid for those who applied for that option between March 24 and March 28. It is unclear what alternatives unregistered or more recently infected voters will have. Obstacles also exist with voter education, as parties have canceled face-to-face canvassing and the delay of the start of the school year has set back election education for 18-year-old voters. Moreover, political parties in South Korea are incredibly fluid and have undergone dramatic changes over the years—merging, dissolving and changing their party names—which sets new parties at a distinct disadvantage during the short political campaigning period. Election materials have been made available online and will be distributed when schools reopen, but participation among young and politically moderate voters is expected to fall.

There are many reasons to watch closely as South Koreans head to the polls on April 15, the most important of which, is to see if the government’s plan will be effective in facilitating such a mass gathering without a resurgence in infections. While the plans being put into place to increase voter safety are clear, whether they will be effective enough to convince voters to actually go and cast their ballots is still murky. Moreover, even though additional precautionary measures have been considered, it appears too late to introduce such alternatives as “drive-through” election stations which would further limit person-to-person contact. But the show will go on. And South Korea’s success or failure in this endeavor, like its achievement in “flattening the curve” of infections, may be equally instructive. With more than a third of the world’s population under some kind of COVID-19 related lockdown, a successful election in South Korea next week could provide some guidance for trying to balance efforts to contain COVID-19 and a return to some semblance of normalcy.

Jenny Town is a Fellow and Deputy Director of the 38 North Program at the Stimson Center.

Natalia Slavney is a Research Associate and Assistant Editor of the 38 North Program at the Stimson Center.