Can South Korea's Rival Parties Unite Behind Opposition to Japan? 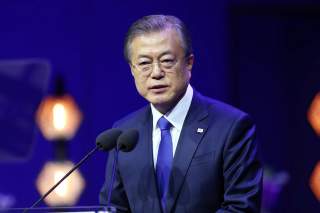 South Korea’s historical antipathy towards Japan has spilled over dramatically into the economic sphere in recent months, prompted by a number of ongoing, interconnected disputes. Chief among these has been a series of court rulings in South Korea allowing individuals to seek compensation from Japanese companies that used forced Korean labor during the colonial occupation of the peninsula (1910–1945). In response, Japan has taken the unprecedented step of introducing trade restrictions, curbing exports vital to production in some of South Korea’s leading industries, particularly semiconductors.

With the situation showing dangerous signs of escalation, South Korean president Moon Jae-in convened a July 18 meeting with leaders of the country’s five main political parties—the first such gathering in over a year. The assembled politicians subsequently issued a joint statement that included a pledge to “work together to strengthen the fundamentals of the national economy,” and plans for “establishing and operating an emergency cooperation body for a response at the pan-national level.”

This meeting was a rare public moment of unity in what remains a deeply divided political landscape. The history of South Korea’s internal political debates shows little evidence of sustained bipartisanship between competing liberal and conservative factions—especially when it comes to relations with Japan. Consequently, the unity is unlikely to last.

The election of Hwang Kyo-ahn this past February as leader of the LKP has brought new energy to the Right. Kyo-ahn served as prime minister for former President Park Geun-hye. Now, under his leadership and together with the smaller conservative parties, the LKP has dialed up the confrontational approach that has been used against the Moon administration and his ruling Democratic Party. This approach has included statements referring to Moon’s “liberal dictatorship,” claims that President Moon has acted as “Kim Jong-un’s spokesman,” and it has even included a physical standoff at the South’s National Assembly building.

Conflict with Tokyo has provided only a temporary reprieve. While attempting to appear unified, the liberals and conservatives have fundamentally different approaches to resolving the issue. For the Democratic Party, harnessing public anger expressed through a boycott of Japanese products. Around 67 percent of surveyed South Korean citizens support this measure, according to one one poll. Additionally, taking a firm stance with Tokyo is an opportunity to seize back the political initiative. After months on the defensive over the government’s performance on economic growth, labor market reforms, and stalled diplomacy with North Korea, a July 22 Realmeter poll found that domestic support for Moon had hit 51.8 percent—his highest approval rating in eight months.

The conservatives, on the other hand, have been attempting to walk the tightrope of criticising the Moon administration’s handling of the burgeoning conflict without appearing to offer any support to Tokyo. South Korea’s Foreign Minister Kang Kyung-wha has already been targeted by the opposition for being “AWOL” on a trip to Africa during the crisis. Moreover, Hwang Kyo-ahn called for Moon to “solve this with a top-down approach” by holding a summit with Japan’s Prime Minister Shinzo Abe to resolve the situation. At this stage, conservative strategy appears to entail searching for ways to ensure that Moon and other senior officials take full responsibility if the dispute with Japan continues to escalate, which could have potentially dire consequences.

Furthermore, looming National Assembly elections next April will figure prominently in the political calculations of the Right and Left regarding every issue, confrontation with Japan being no exception. These polls will be regarded as a referendum on not only Moon’s stewardship of the country, but also a measuring stick of conservative revival since former President Park ’s impeachment, the blowout presidential election loss of 2017 and last year’s local election losses.

So far, Moon has benefitted from the ability to be seen as “tough” in his approach to Japan, which contrasts with accusations that he has been weak on his stance toward North Korea. Moon’s July 18 meeting also gave him the opportunity to reassert his presidential stature as leader of the nation, and his recent statements have hinted that Japan may become a useful scapegoat for South Korea’s sluggish economic performance.

But the liberals will have to display some caution of their own. Kim Jong Kook, Moon’s secretary for civil affairs and justice, recently wrote that those who criticize past South Korean court rulings against Japan should be called “pro-Japanese,” a label that is not taken lightly in the postcolonial state. Questioning one side’s patriotism is a tactic employed by both liberals and conservatives in South Korea, and the political winds can change quickly.

For now, amid the combative and highly polarized discourse of South Korea’s domestic politics, the July 18 meeting is notable, but not indicative of any long-term trend towards a bipartisan approach. Clear disincentives exist for conservatives who dare to position themselves on the wrong side of the South Korean public. However, next year’s elections are now on the horizon, which means that the country’s opposition forces will attempt to maintain unity with the public while searching for opportunities to oppose the Moon administration’s handling of the crisis. In South Korea, even when confronting the economic retaliation measures of a historic rival, all politics is local.

Alexander M. Hynd works as a security analyst in Seoul, South Korea. He holds a BA from SOAS, University of London, and an MA from Korea University. Follow him onTwitter @AlexanderMHynd.

Nate Kerkhoff is an assistant researcher at the Yonsei Institute for North Korean Studies. He holds an MA from Yonsei University in Seoul.