China and USA Not Full Partners on North Korea 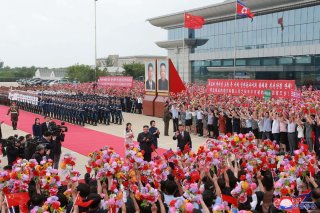 China’s importance to any process for bringing about peace and stability on the Korean Peninsula is undeniable. That makes China a potential partner of the USA, South Korea, and Japan, but also a potential spoiler. Beijing’s actual performance has been a combination of both roles.  “Partnership” implies working toward the same outcomes, but Beijing’s agenda for the Peninsula is clearly different from the agendas of Washington, Seoul, and Tokyo.

Beijing and Washington both support de-nuclearization of the Peninsula, but this comradery is superficial. The immediate problem with North Korea is its acquisition of nuclear weapons and ballistic missiles, declared illegal by the United Nations Security Council (UNSC). But Washington and its democratic Asian allies see the more fundamental problem as the North Korean government’s atavistic hyper-authoritarianism and refusal to fully integrate itself into the liberal regional economic regime. The ultimate solution, even if unspoken, is regime change. For Beijing, however, the ideal North Korea is a one-party dictatorship and quasi-vassal state, much like it is today, but minus the high level of tension with its adversaries.

In both the THAAD controversy and the aftermath of the sinking of the South Korean warship Cheonan, Beijing demonstrated its view that South Korea’s right to defend itself is secondary to Chinese opposition to the United States appearing to enlarge its strategic role in Northeast Asia.

Along with occasionally prodding and admonishing Pyongyang, Beijing has consistently acted as a protector of the Kim regime.  The Chinese delegation has worked to soften the punitive action against North Korea by the UNSC.  Fearful of the turmoil that might result from a collapse of the Democratic People's Republic of Korea (DPRK) government, China helps North Korea circumvent those sanctions that the UNSC and other countries impose.  Beijing takes the position that reducing the sanctions against North Korea will encourage Pyongyang to engage in meaningful negotiations.  While South Korean President Moon Jae-in endorses that approach, Washington is strongly opposed.  In the U.S. view, unilateral sanctions relief would signal tacit acceptance of the North Korean behavior that caused the imposition of the sanctions, with little reason to expect that Pyongyang would respond by taking substantial steps toward dismantling its nuclear weapons and ballistic missile programs.  In short, China’s policy toward North Korean sanctions has seriously undermined attempts by the international community to apply pressure that might convince the North Korean government to moderate its outlaw behavior.

The notion of a “partnership” is further damaged by Chinese attempts to use the North Korea issue as leverage against America’s larger regional agenda.  Beijing tends to see virtually all issues in U.S.-China relations as linkable.  Specifically, Chinese officials frequently warn that U.S. support for Taiwan’s ability to resist involuntary unification with China will cause Beijing to be less supportive of cooperation with the United States in other regional security issues, a veiled reference to the Korean Peninsula.  Some Chinese analysts argue that the regional security problem created by North Korea makes it harder for U.S. forces to intervene against China in a Taiwan Strait scenario, effectually recognizing another strategic reason why China has an interest in perpetuating the status quo.

Beijing is a partner only to the extent that it supports negotiations to lower tensions on the Korean Peninsula.  In order to get those negotiations, the Chinese government favors accommodating Pyongyang’s demands for unequal concessions.  More broadly, Beijing holds a vision for the region, including North Korea’s place within it, that is in various ways at odds with US, South Korean, and Japanese objectives.