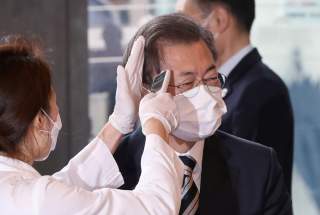 Trying to keep track of Korean politics is almost impossible for a normal person in the best of times.

Parties merge, change their names, and dissolve all the time. Scandals over shady business dealings and nepotism emerge like clockwork. (No president is safe from prison.) And public squares are constantly occupied by passionate protesters and fire-breathing rabble-rousers inciting them.

Now, throw in a coronavirus outbreak that has infected over 1,700 people, nationwide elections coming up, and we’re in for a wild ride over the next two months.

Party primaries begin this weekend, and the election for the 300 seats of the National Assembly takes place April 15. Already there has been the establishment of a new unified opposition party and the arrest of a conservative pastor leading protests of president Moon Jae-in.

Jeon Kwang-hoon was arrested on February 24 for allegedly violating election laws by endorsing a particular political party. Jeon had been rallying social conservatives in Gwanghwamun Square for months, calling Moon a "North Korean spy,” and capitalizing on opposition to former minister of justice Cho Kuk, who had to resign over snowballing scandals.

On February 27, his supporters were cleared for Gwanghwamun Square for violating an order against holding large-scale protests in a time of public health emergency. Black-clad public workers, wearing hard hats and face masks, descended on Gwanghwamun Square in downtown Seoul and dismantled tents.

They tore at the tarps, pulled down the supports, and collapsed tents on top of those who were conducting sit-ins. By the time the square was cleared, six protesters and four police officers required medical attention, according to Korean MBC News.

Gwanghwamun Square, which had been occupied by anti-Park activists since around 2014, then by pro-Park activists still fighting old battles starting in 2017, then by Jeon’s followers and all manner of other groups small and large, will, presumably, be relatively empty for the next month or so. The Taeguki flag wavers will have to take their fight to the ballot box, hence the establishment of the new conservative opposition party, the United Future Party.

The conservative movement split in 2016 over Park’s impeachment essentially into three groups: the establishment Saenuri Party, which rebranded itself as the Liberty Korean Party (LKP); the Bareun Party, a group of Saenuri Party members who had voted to impeach Park and later merged with the populist reformist People’s Party; and the hardcore pro-Park faction, represented by a few small parties, which upheld her populist, personalistic brand of politics even after her removal.

After the LKP and Bareun performed poorly in 2018 local elections and then lost their combative floor fights to block the passage of an electoral reform bill supported by the Democratic Party, they felt it was time to unify before the upcoming elections. On February 17, three new parties, the New Conservative Party, New Alternatives, and Onward for Our Future 4.0, representing 115 seats in total, all three merged into the United Future Party.

Its party leader is Hwang Kyo-ahn, who was Prime Minister under Park. Hwang will be competing for a parliamentary seat in Seoul against Lee Nak-yeon, who, until January, was Moon Jae-in’s Prime Minister. Lee currently leads the battle of the prime ministers 47.9% to 27.9%, according to a survey.

Korean political campaigns are usually boisterous affairs. Volunteers hold placards with the candidates’ faces. Mobile campaign trucks drive around broadcasting videos on giant LED screens. Candidates appear at rallies with personal songs and cheerleaders. But this year, the campaigns will have to be toned down.

“The method of campaigning may be changed by using online campaigning or social media more than before,” said Kwon Gi-won, chief of staff for a conservative politician.

Earlier in February, some candidates had begun to cut down on handshaking. Now some are canceling in-person events all-together. Song Haeng-su, a Democratic Party challenger in Daejeon, announced on February 24 that he will utilize SMS and online campaigning instead.

His opponent, Lee Eun-gwon, of the UFP, who defeated him 41.6% to 33.9% in the 2016 elections, is attacking President Moon Jae-in for his handling of coronavirus. Lee called for banning Chinese “infectious agents” from entering Korea. (Only travelers coming from Hubei province have been banned so far.)

Moon’s popularity has already slipped from the 70’s early in his term to the high 40’s today, as the diplomacy he championed with North Korea failed to produce results and the economy remained stagnant. The administration’s response to coronavirus and the perception by some that he has done a poor job will be one more challenge for the Democratic Party to overcome as it struggles to hold onto a slim plurality going into Moon’s final two years in office.