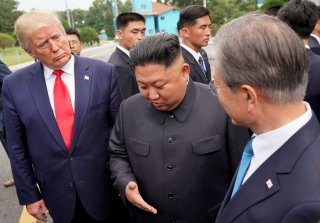 COVID-19 has awakened the importance of “human security” as it is threatening human health and safety around the world. National security involving traditional concepts such as military threats to territorial integrity and strategic challenges for national sovereignty, in contrast, appears to be sidelined for the moment. North Korea has thus conducted short-range missile tests three times this March alone with a view to holding U.S. attention tight toward North Korea. In this vein, a typical national security issue like the North Korean nuclear problem should be now looked at through the comprehensive perspective that includes both national and human security dimensions.

As soon as COVID-19 broke out in Wuhan, China, North Korea closed the border with China, which was an extreme move given that China accounts for 90 percent of North Korea’s foreign trade. This also meant North Korea had given up taking advantage of the loopholes of economic sanctions imposed by the UN Security Council to prevent the inflow of COVID-19. The informal economy maintained by the smuggling of daily necessities from China has been suspended to prevent the virus from spreading into North Korea.

This is a big gamble for the North Korean regime since its prolonged self-containment would threaten the daily survival of its people, thereby destabilizing the Jangmadang (the small informal market largely relied on smuggled Chinese goods) economy. This could emerge as a detonator for regime failure in North Korea. As a preventive (or pretentious) measure, the Kim Jong-un regime test-fired short-range ballistic missiles recently and sent a message to America that North Korea could play a spoiler against the reelection of President Donald Trump who is struggling to control the rampant spread of COVID-19 in the United States.

North Korea’s short-range missiles, including the most recently tested ATACMS (Army Tactical Missile System), pose the immediate threat to South Korea as well as USFK (U.S. Forces in Korea) while North Korea’s ICBMs (Inter-Continental Ballistic Missiles) appeared to be being completed. The North Korean version of a surface-to-surface guided missile called MGM-140 ATACMS has shown a “pull-up” maneuver over the course of its flight. This threatens the PAC3 and THAAD missile defense systems deployed in South Korea since ATACMS are designed to avoid interception through its irregular maneuvering. This kind of upgraded version of short-range missiles foreshadows the advent of ICBMs that have overcome the limited success of North Korea’s previous Hwangsung-14 and Hwasung-15 tests in 2017. This was all possible because North Korea never stopped its nuclear and missile development during its summit diplomacy with the United States.

COVID-19, in this vein, is making a gloomy impact on U.S.-ROK-DPRK relations. It has chilled inter-Korean relations further that had been already subsided by the stalled U.S.-NK nuclear talks. The Moon Jae-in government of South Korea offered North Korea to cooperate over COVID-19, but it was virtually rejected by North Korea’s lukewarm attitude. President Trump has also offered cooperation over COVID-19 including humanitarian aid, but North Korea is unlikely to accept it unless the United States will implement the easing of economic sanctions that North Korea has demanded “desperately” since the Hanoi summit last February.

In the forthcoming months, North Korea will be taking a cautious—but provocative—attitude so that the COVID-19 situation will play a catalyst for America to revisit its North Korea policy and ease economic sanctions for whatever rationale to create a strategic victory for North Korea. This is one of the reasons that North Korea is not rapidly increasing the ballistic missile range in recent provocations. When Kim finds this cautious tactic unworkable, however, he will switch to be more provocative and aggressive around the time when the COVID-19 situation in China is stabilized to the extent that he can reopen the border to trade. North Korea will be rapidly moving to test mid-to-long range ballistic missiles, not excluding the possibility of ICBMs. President Trump could stretch his appeasing hands to Chairman Kim before ICBMs are test-fired. President Moon would welcome it, but it is unlikely to happen since the U.S. appeasement policy to North Korea will guarantee neither diplomatic success nor the denuclearization of North Korea.

Kim Sung-han is a Professor at Korea University.