Could this Business Venture Create Peace on the Korean Peninsula? 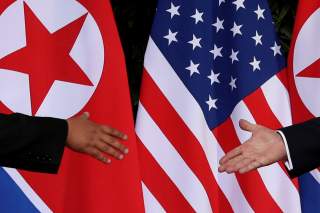 As the Trump administration’s national-security team gets a makeover, specialists interested in exploring diplomatic solutions to the most vexing quandaries in international security are inspired anew. Without John Bolton, the hawks’ favorite hawk, are there new possibilities to explore? Diplomatic overtures to Iran seem unlikely after the September 14 attack on the Saudi oil facility. Reversing course on Venezuela sanctions or the China tariffs could have many positive effects, for sure, but the politics would be ever so complicated. Those two lovely “genies” will be more than a little difficult to squeeze back into their respective bottles.

Let’s not forget about North Korea. Indeed, that may constitute the area of foreign policy in which President Donald Trump has given the Washington foreign-policy establishment the most amount of heartburn. In choosing to meet with Kim Jong-un not once, but twice, Trump opted to break through long-existing presidential norms of behavior and expectations set by the “blob.” Recall that it was Bolton that had tried to scupper the original outreach to Pyongyang early on by proposing the “Libyan model” of disarmament. At the later Hanoi Summit, a senior South Korean diplomat reports that he was initially optimistic, but then “attributed the failure to a last-minute stipulation proposed by Bolton that would mandate North Korea not only report on its nuclear weapons but its chemical and biological stockpiles too.”

The Hanoi fiasco has left most Washington foreign-policy experts chuckling about these antics. How could the Trump administration ever possibly have been organized enough, focused enough, and diplomatic enough to pull off a genuine agreement with Pyongyang while at the same time torpedoing similar arms control efforts with Tehran? No surprises here, they chortle on, as if there was ever an obvious solution to the North Korea issue. But could the president, untethered from his hawkish former national security advisor, now pull a rabbit out of his hat?

To do so, he would obviously require the close cooperation of Beijing. Lest we forget, the closest thing to an agreement that has existed for the Korean Peninsula over the last few years, the so-called “double freeze,” which entailed the suspension of missile and nuclear testing in exchange for a suspension in U.S. military exercises on the Korean Peninsula, originally began as a Chinese proposal. Now, a recent and rather unusual article in the official Chinese journal Ocean Development and Management [海洋开发与管理] may point toward an unexpected—but potentially expedient—vector: the Tumen River port of Rajin (Rason).

For enthusiasts of geography, this rather sleepy venue makes for a very interesting corner of Northeast Asia, indeed. This is where the three countries, including North Korea, China and Russia meet. That in itself makes the location especially fascinating, but then there is the additional fact that, as these Chinese researchers explain: “The Tumen River is the closest location to the [Arctic] Northeast Passage in China.” That route is now a key part of Beijing’s Belt and Road Initiative and, as it is explained in the article, “The construction of the Tumen River into the sea port has important economic driving effects and strategic significance for China [建设图们江入对于我国具有重要的经济带动效应和战略意义].”

These two scholars from China Ocean University in Qingdao assert that the geographical conditions are indeed conducive to the development of a port and transport hub, particularly if this port develops along the “model of the free port [自由港模式].” Their claim is that the Tumen River port project would actually kill three birds with one stone. It would contribute to the enhanced viability of the “Polar Silk Road”; it would spark growth and development for the otherwise land-locked northeast of China, especially the Heilongjiang and Jilin provinces; and finally, the project would “become the 3-country economic cooperation engine [可以成为国的经济合作引擎].”

To be sure, the concept is not a new one. These Chinese analysts note that in Nov 2010, Beijing and Pyongyang came to an agreement on the “joint development” of the Rajin Special Economic Zone, which had already existed for quite some years before that. A Western visitor to the area in 2014 gave the following interesting report on marketization and the flow of Chinese goods: “The lanes of the [soccer-field size] market are closely packed with women of all ages who sell whatever you can imagine: from fresh fish to refrigerators. In the fruit corner almost anything is on offer: whole pineapples, bananas, nectarines, grapes, and more. The prices are hefty; all these goods are imported from China.” North Korea has also been exporting some coal through Russia via the partially upgraded Rajin port for several years.

But everything is hard in this part of the world, as is well known. The Chinese scholars note that Beijing had maintained the “right of egress to the ocean [出海权]” via the Tumen River since 1964—a rather dark time for Russia-China relations. Yet, it is reported in this Chinese article that North Korea has also obstructed Chinese access for “political reasons” even after the end of the Cold War. Interestingly, the railroad bridge connecting Russia and North Korea that crosses the Tumen River only affords seven meters of clearance, and this is thus said to constitute a “technical limitation” on Chinese shipping along the waterway.

And yet, there is still a bit of optimism to be found in this Chinese survey of the problem. They note that local Chinese and Russian firms now have some experience in working together on some “win-win” projects, including port projects as part of the Belt and Road Initiative. They explicitly note Moscow’s encouragingly “open attitude [开放态度]” toward foreign investment. Moreover, they advocate a “build-operate-transfer” (BOT) model to mitigate sovereignty and security concerns among the three countries.

A recent incident that involved a small skirmish between the Russian Coast Guard and North Korean fishermen well illustrates the practical complexities of international cooperation in this generally cold and forbidding corner of Northeast Asia. Still, it could hold some promise to deliver the practical “breakthrough” that the current North Korea negotiations so badly need.

This would require some new approaches and it would require officials in Washington and Seoul would to do some soul searching. First, they would need to realize that the pressure tactics they are using on Pyongyang have become mostly counterproductive. The more intense the pressure, the more Pyongyang holds fast to its nascent nuclear deterrent. Second, there must be a fundamental realization that North Korea does not want hand-outs or to be “saved” by its cousins to the south. The two Koreas share a common etiquette and symbolic pleasantries, but too tight of an embrace, including one of a commercial nature, could create political instability in North Korea. A more subtle approach is needed. The third and final realization is that change on the Korean Peninsula must be gradual and stem from working closely on the northern vector—in cooperation with both Russia and China. Both Moscow and Beijing must be incentivized to move away from the “cautious, defensive crouch” toward activating dynamic economic cooperation together with region-wide disarmament.

I visited the surprisingly charming tri-country area in late 2017 via Chinese high-speed train [高铁], which has a stopping point that is within a short taxi ride to where the three countries meet. In building that costly, yet scenic, rail line Beijing was sending a message to the world about how to resolve the Korean issue: focus on economic development issues and put aside political/security issues. The United States and other major powers should now follow that approach to its logical conclusion by carving out an exception within UN sanctions that will allow the Rajin Port to flourish as a completely free-trading entrepôt in a part of the world desperately thirsting for a “live and let live” approach.

Just as Hong Kong served a crucial role as a beacon for Chinese reformers in the late 1970s, the Rajin Port could play a similarly constructive role for North Korea and help to gradually alleviate the grave tensions that still plague the area today. Trump has wide experience with building and development. He shares this passion with the Chinese leadership. A gleaming North Korean port entrepôt distant from stuffy Pyongyang could be a fitting legacy for Trump’s innovative diplomacy and perhaps demonstrate his willingness to embrace multilateral diplomacy and development in Northeast Asia.

The alternative to this “free port beacon” model is a return to “maximum pressure,” of course. Attempting regime change through economic strangulation might actually yield a good result, but it’s just as likely to spark the apocalypse. Let’s continue to think “outside the box” and try a different, constructive approach.

Lyle J. Goldstein is research professor in the China Maritime Studies Institute (CMSI) at the United States Naval War College in Newport, RI. In addition to Chinese, he also speaks Russian and he is also an affiliate of the new Russia Maritime Studies Institute (RMSI) at Naval War College.  You can reach him at [email protected]. The opinions in his columns are entirely his own and do not reflect the official assessments of the U.S. Navy or any other agency of the U.S. government.