Could Donald Trump Shock the World on North Korea in a Second Term? 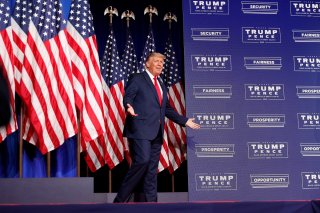 Donald Trump has changed his position on the North Korean issue numerous times over the past four years. In 2017, when North Korea conducted its 6th nuclear test and launched the Hwasong-15 intercontinental ballistic missile, Trump emphasized “Maximum Pressure” and planned a “Bloody Nose” operation, a preemptive strike against North Korea. However, after meeting Kim Jong-un in Singapore in June 2018, he said that he fell in love with him. When the Hanoi Summit in February 2019 failed, everyone believed that it was over, but Trump invited Kim Jong-un to Panmunjom for a bilateral meeting.

Trump’s ever-changing policy toward North Korea has also changed the domestic political landscape of both the United States and South Korea. In 2017, American Democrats and liberals criticized Trump's military options, emphasizing giving diplomacy another chance. At that time, the liberal groups in South Korea criticized Trump’s hard-line policy, while the conservative groups supported him. However, since 2018, American Democrats and liberals started criticizing Trump's negotiations with North Korea. The conservative groups in South Korea changed their course of action and started criticizing Trump’s negotiation with North Korea, while the liberal groups supported Trump. What a surprise!

In fact, Trump had already made clear his surprising North Korea policy in Singapore. He mentioned at the press conference, “The past does not have to define the future. Yesterday’s conflict does not have to be tomorrow’s war. And as history has proven over and over again, adversaries can indeed become friends. We can honor the sacrifice of our forefathers by replacing the horrors of battle with the blessings of peace. And that’s what we’re doing and that’s what we have done.” This is why we can expect many “October Surprise” in the second Trump administration. Of course, his comment is based on the “America First” policy. To him, any foreign policy can be taken if it is beneficial to the Americans, so a new relationship with North Korea can be created. As Trump’s last four years have shown, the “America First” policy can make past enemies new friends and make existing allies uneasy.

If the second Trump administration resumes U.S.-North Korea negotiations, it is possible that the North Korean nuclear issue will be at least partially resolved. This is because if North Korea neither conducts nuclear tests nor launches intercontinental ballistic missiles, it will not be a big threat to Trump. Even before the US presidential election, signs of contact between the U.S. and North Korea have begun to appear. Trump recently initiated his own peace diplomacy by bringing the UAE and Bahrain into ties with Israel in the Middle East. Trump may believe that it probably helps his re-election campaign and his dream of winning the Nobel Peace Prize. In this context, there is a possibility that the nuclear deal with North Korea will also be concluded.

The question is what kind of concessions Trump will provide to North Korea in the process of signing a nuclear agreement. The South Korean government may accept the “small deal” or “interim agreement,” which was discussed before the 2019 Hanoi summit. If the U.S. troops withdrawal or other serious concessions are made without any prior consultation with the South Korean government, however, it will become a nightmare for South Korea. Furthermore, it will make other US allies uneasy. Trump has already mentioned the reduction of US forces in Korea and the cancellation of U.S.-ROK joint exercises in Singapore without prior consultation with South Korea. So the possibility of “America First” diplomacy is very high on the Korean Peninsula.