Could Donald Trump Use the State of the Union Speech To Change Course on North Korea? 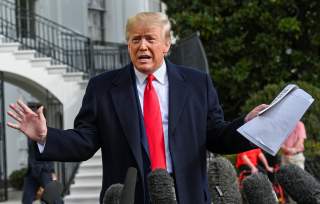 North Korea did not launch a long-range missile over Christmas or New Year’s Day. Instead, it released a summary of the 5th Plenary Meeting, including a speech by North Korean leader Kim Jong-un. The threat of a “new strategic weapon” notwithstanding, the meeting was notable primarily for its restrained nature. The question is whether the United States will also exercise restraint in dealing with North Korea’s nuclear program, rather than needlessly escalate tension as it recently did in the Middle East by assassinating Iran’s top general Qassim Suleimani.

North Korea’s December meeting served two purposes. For its domestic audience, it was an opportunity to reaffirm North Korea’s twin focus on economic development and national defense. Much attention was paid to ways to strengthen North Korea’s economy, which is suffering from “manifold hardships” requiring a “rearrange[ment] of the economic foundation.” For the international audience, the plenary meeting was designed to instill a sense of urgency for nuclear negotiations to resume. Kim said there is “no ground” for North Korea to continue its moratorium on nuclear tests and inter-continental ballistic missile tests absent a less hostile stance by the United States. The message was clear: The longer we wait, the greater the risk for confrontation between North Korea and the United States.

Much like the plenary meeting, President Donald Trump will also have an opportunity to cast his vision for the year at the upcoming U.S. State of the Union in the U.S. Congress. This annual ritual gives presidents a chance to explain the federal government’s priorities and progress made in key areas. It sheds light into our country’s values and the principles undergirding our actions. And like North Korea’s plenary meetings of party officials, the State of the Union will be made in front of elected officials whose branch of government oversees the executive branch and whose support the president needs in order to implement a coherent North Korea policy. With former Special Representative for North Korea Stephen Biegun’s elevation as Deputy Secretary of State and intensified conflict in the Middle East that will demand U.S.’s attention, the Trump administration might finally take a more realistic path on North Korea. It will not be easy, as there are ample distractions that could prevent the Trump administration from doing the right thing. But if President Trump decided to change course, he could use this year’s State of the Union address to lay out the following:

Explain why diplomacy, not war, is best in dealing with North Korea.

A threat-driven, overly militarized posture that has defined U.S.-North Korea relations over the past two decades have made it harder, not easier, to pursue a different path, or what Secretary Mike Pompeo once described as “a fundamentally different strategic relationship.” President Trump should explain the status of nuclear negotiations with North Korea and why diplomacy -- nor war -- will make us safer. He should push back against those who advocate for ever-more coercive measures that will shut the door for diplomacy and make costly military intervention more likely.

Propose a short-term deal in exchange for Pyongyang starting the process of dismantling some of its nuclear facilities.

To truly begin the denuclearization of the Korean Peninsula, as stated in the Singapore Joint Declaration, the United States must be clear in what positive inducements it is willing to offer in exchange for North Korea starting the process of dismantling its nuclear facilities. Lifting sanctions for an extended period of time is one such incentive to get North Korea back to the negotiating table that will enable us to establish the process of denuclearization, which some estimate could take as long as fifteen years. Pursuing the end-goal of denuclearization upfront without making any concessions has gotten the United States nowhere. It is time to use the leverage we hold through economic sanctions to test North Korea’s intentions.

Any deal with North Korea will require cooperation with U.S. ally South Korea. The Trump administration should drop its excessive demands for the burden-sharing agreement in favor of a more realistic request that is compatible with Seoul’s position. Antagonizing South Korean President Moon Jae-in at a time of historic opportunity to bring peace to the Korean Peninsula is counterproductive, illogical, and harmful to the long-term interest of the United States in East Asia.

Jessica Lee is a Senior Research Fellow in the East Asia Program at the Quincy Institute.