Deterrence First: Why Some Koreans See Military and Economic Pressure as the Solution to North Korea 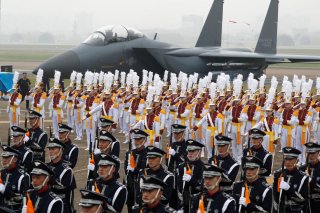 This view of Beijing was broadly shared among Deterers, but came with different caveats. Some favored building new deterrence capabilities while not publicly antagonizing the more powerful China. Captain Sukjoon Yoon told TNI, “Yes, it is true we are concerned about a rising China. But they are our neighbors, and we are still a weak and small, vulnerable country. We should be maintaining good relations with China. We should not paint China as a potential enemy.”

Furthermore, Deterers do not all agree on whether Japan is a threat. “Personally, I think it is not North Korea, but China—and possibly Japan—that we should be more worried about,” Dr. Min Gyo Koo said to TNI. “We accept North Korean nuclear weapons that we can defend ourselves against, no problem with that. But a rising China and a rearming Japan pose a greater threat to the future of the Korean peninsula. In response to this, there are some things we have to do.” Dr. Min Gyo Koo wants a larger navy and is glad President Moon Jae-in has bought the F-35 and that Seoul is building amphibious assault ships to carry them.

Given these concerns with not just North Korea, but other countries too, Deterers argue over how far to go with new capabilities—not whether to get rid of them. For instance, they debate how much more the alliance can do, which technologies are worth pursuing, and whether to get a South Korean nuclear bomb. Additionally, interservice rivalries over which branches get the biggest slice of the defense budget are intense. Dr. Min Gyo Koo explained this desire to spend more in order for South Korea to be taken seriously. “We have to do the minimum,” he said. Otherwise, Seoul risks “being disregarded.”

An example of one of these debates is whether Seoul needs a home-grown anti-missile defense or a decapitation unit. To Deterers, these questions are less about how North Korea views such weapons, but rather if they are cost-effective or if America does it better. Dr. Sung-han Kim told TNI, “I think Korean missile defense is nonsense. That is a rhetorical defense. I think Korea should join the U.S.-led missile defense shield as soon as possible. And the Korea Massive Punishment and Retaliation program should be modified and made more sophisticated as soon as possible.” In fact, Dr. Sung-han Kim suggested the measures taken in Seoul’s recent Defense Reform 2.0 were insufficient. In his view, more upgrades and consultation with Washington are needed. Without these, he sees the dangerous possibility of deterrence faltering.

Dr. Sung-han Kim believes that, just like with its European allies during the Cold War, America needs to do a better job of reassuring Seoul. “America has been saying the U.S.-provided nuclear umbrella is quite reliable and safe. But in light of the rapidly improving nuclear missile capability of North Korea, it is hard to say for sure the U.S. will continue to provide a really reliable nuclear umbrella if Pyongyang can attack the American mainland.” While Dr. Sung-han Kim thinks a South Korean nuclear weapon is not necessary, he does think Washington should base nuclear weapons in Guam or in South Korea. He reasoned if nuclear sharing was done with America’s European allies, why not also with Seoul? “The United States would have ownership, but we can share the buttons.”

The fear that North Korea might attempt a fait accompli is behind this talk of nuclear sharing. Dr. Sung-han Kim elaborated that tactical nuclear weapons might be the best way to prevent Pyongyang from seizing a sparsely-populated island and then threatening nuclear retaliation if Seoul or Washington reacted. In his view, that would be a humiliating blow that would weaken the alliance since America would probably not react right away. Additionally, Dr. Sung-han Kim warned such a scenario would increase the chance of Seoul building its own nuclear weapons.

This debate over nuclear sharing and South Korean nuclear weapons is more prominent today among Deterers than it has been in the past. Dr. Min Gyo Koo explained, “This idea first came out in the 1970s when the Jimmy Carter administration indicated they would withdraw U.S. troops from the Korean Peninsula. President Park Chung-hee secretly pursued a nuclear weapons program to no avail. This idea is still alive.”

Dr. Min Gyo Koo went on to state, “Without the U.S. presence, nuclear weapons are the only way we can defend ourselves, and many people believe that would be the ultimate kind of deterrence against North Korea. Personally, I don’t think we will be kicked out of the U.S. nuclear umbrella anytime soon. But, when you talked about this issue ten years ago, you would have been regarded as a lunatic—one of the few very radical conservative, military fundamentalists. But today, that idea attracts an increasing number of people. So this is not new, but a re-emerging issue in Korean security circles.”

Captain Sukjoon Yoon, however, disagrees that South Korea should build its own nuclear weapons or host any U.S. ones such as the P61 gravity bomb. “That would not make sense at all,” he told TNI. A South Korean nuclear weapon or nuclear-sharing with America would make things worse in his view. “No, we don’t want to do that.” Moreover, Captain Sukjoon Yoon thinks while South Korea should have a larger navy, it does not necessarily need light carriers or nuclear-powered submarines. On the one hand, building these systems means Seoul does not have to rely on Washington sending its own similar vessels if it is too costly. Yet, on the other hand, South Korean aircraft carriers would be based in a “semi-enclosed sea” that’s too small and risky because they would be expensive to build and present “a wonderful target” if a war broke out. Additionally, Captain Sukjoon Yoon thinks nuclear-powered submarines are louder and too costly. He sees them as unnecessary since South Korea doesn’t need submarines able to patrol faraway places like the Indian Ocean. “We already have more than twenty convention submarines, which are all very quiet.”

When asked directly about paring down South Korea’s military, Dr. Min Gyo Koo said: “That is strategic suicide.” He argued, “Giving up on your own military capabilities in a false hope doing so would reduce the threat perception on the other side? I don’t think so. It’s not an arms race. No. It is impossible for North Korea and South Korea to both participate in an arms race—it is already done, and Seoul won. Arms races matter when two different countries have a rivalry and work towards the same direction, but North Korea and South Korea have moved toward different directions: North Korea, nuclear, and South Korea, conventional capabilities.”

The Deterers’ Vision of Unification

Deterers want to see Korea reunited, and believe that goal is more important than Washington’s concerns with denuclearization. To them, a united Korea must be democratic and free market, but that vision cannot come about if Pyongyang believes it calls the shots. Not all Deterers agree on the path forward, but they generally think that given the reality of North Korean nuclear weapons, South Korea must maintain its conventional superiority and the alliance with America in perpetuity. Unification can occur, but only in the long-run. Some Deterers see pressure to bring down Pyongyang’s rulers as the key, and others believe inter-Korean trade coupled with North Korean development is the right call. Either way, Deterers are most concerned with security on the Korean peninsula—keeping Pyongyang down and Beijing out so nothing can stop the Korean nation from finally being whole and free.

Dr. Sung-han Kim is of the view that a return to maximum pressure is vital. “We have been extremely kind, extremely nice, expecting some meaningful concessions out of North Korea for the past couple of years. But now, we all know what North Korea wants vs. what we tried to give to North Korea, and North Korea knows it. Under these circumstances, I think working-level negotiations, quite frankly, are the means to buy time rather than strike a good deal, which I believe is impossible unless Pyongyang or Washington makes a big strategic concession.” Dr. Sung-han Kim insists that denuclearization is not mutually exclusive with renewed pressure. He thinks talks can continue as Seoul increases sanctions or hosts U.S. tactical nuclear weapons.

He argued to TNI that pressure should be maintained while still trying to strike a deal. He saw partial denuclearization as a possibility in exchange for perhaps some combination of partial sanctions removal and some political improvements. For example, he could see Pyongyang giving up nuclear facilities at Yongbyon, Punggye-ri, or Tongchang-ri. In return, America could remove the least effective sanctions resolutions, open liaison offices, send humanitarian aid, or sign an end-of-war declaration. However, Dr. Sung-han Kim still thinks such a deal is unlikely without another round of intimidating economic and military pressure.