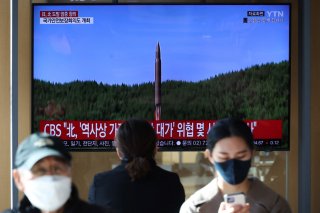 All year long, North Korea and the U.S.-South Korea alliance have engaged in tit-for-tat exchanges of military provocation, and tensions have steadily increased. And this week, North Korea’s missile launches and U.S.-South Korean military exercises have brought tensions on the Korean Peninsula to a new and quite dangerous level. Washington and Seoul conducted their largest-ever air drills, and a North Korean ballistic missile landed off the South Korean coast for the first time. Seoul immediately retaliated by firing back a record number of missiles off the North Korean coast.

Amid the continued escalation, North Korea has been preparing for its seventh nuclear test since early this year and is believed by some to be ready to pull the trigger anytime. In response, Washington and Seoul have ramped up their military exercises and deployments around the Korean Peninsula as a show of strong resolve and warning. Each side is flexing its military muscles in a cycle of tit-for-tat provocations that carry intolerable risks.

This saber-rattling will likely lead to severe crises and drastically increase the risk of an armed conflict on the peninsula. In order to reduce tensions and avert worse crises, Washington and Seoul must end this dangerous confrontational spiral and take all actions necessary to re-engage Pyongyang in diplomacy and dialogue.

One cannot dismiss the possibility that the unprecedented level of deterrence signaling by the U.S.-South Korean side affects Pyongyang’s calculation and dissuades it from escalating further. The underlying intent here is to demonstrate a superior level of resolve against the North Korean threat and compel Pyongyang to de-escalate. But such a reactive policy can backfire.

Throughout history, U.S.-South Korean campaigns of pressure to reinforce military warnings to dissuade North Korea’s aggression often triggered more bellicosity instead of deterring it, thereby worsening the escalation spiral. This classic escalation pattern on the peninsula was observed several times in the past, such as in 2013 and 2017.

In 2013, when North Korea’s third nuclear test took place, Pyongyang engaged in an aggressive show of force throughout the year, repeatedly launching missiles, conducting live drills near the inter-Korean border, and threatening to strike the United States. In response, the U.S.-South Korean side engaged in a reciprocal show of force, such as by ramping up land and air drills, launching bomber overflights, and deploying destroyers and a nuclear submarine near the peninsula. Despite these reinforced deterrence signals, North Korea remained belligerent.

Similarly, during the period of severe confrontation on the Korean Peninsula in 2017 that eventually escalated into the sixth North Korean nuclear crisis, Washington’s enhanced deterrence actions and rhetorical threats did not stop Pyongyang from continuing its provocations, including test-firing an intercontinental ballistic missile.

In the final analysis, diplomacy, along with military restraint, often proved to be key to de-escalating tensions on the Korean Peninsula. The dramatic shift from confrontation to peaceful engagement in 2018 was driven by a series of inter-Korean and U.S.-DPRK summits and mutual military restraint measures—the U.S.-South Korean side indefinitely halted joint military exercises, while the North Korean side issued a moratorium on nuclear and long-range missile tests and dismantled a major nuclear site. These efforts effectively reduced tension and hostility and opened up more room for dialogue and negotiations.

At the moment, the United States and South Korea seem to have no better option to deal with North Korea than proactive diplomacy. While certain countermeasures against North Korea’s possible forthcoming seventh nuclear test will be necessary, Washington and Seoul eventually need to find a way to defuse the heightened tension and re-engage Pyongyang in dialogue. And this may require a substantial policy shift from the current maximum-pressure campaign to proactive diplomacy. This is especially the case when the strategy of pressure will probably face limits due to Beijing’s probable continued opposition to additional economic punishments against North Korea.

In both 2013 and 2017, China’s support in putting more economic pressure on Pyongyang, such as cutting ties with North Korean banks and endorsing the UN Security Council sanctions, played an important role in Pyongyang’s eventual de-escalation. But now that U.S.-China relations have deteriorated significantly and China’s suspicion towards South Korea’s role in the U.S. regional strategy is deepening, it has become increasingly less likely that Beijing would help such efforts to punish and coerce North Korea at the cost of its improved political relations with Pyongyang.

Indeed, bad relations with China will continue to limit Washington and Seoul’s ability to cope with Pyongyang’s nuclear threat. That is the geopolitical reality of the Korean Peninsula. While competition appears likely to dominate the U.S.-China relationship for the foreseeable future, it is nonetheless imperative for Washington to make sure it doesn’t define all aspects of the relationship with Beijing going forward, when such crucial areas of cooperation as the North Korea dilemma exist.

While Beijing has steadily opposed imposing more sanctions against North Korea in recent years and could very possibly continue to do so, it has repeatedly expressed a willingness to support regional diplomacy with the regime. Indeed, China can play a serious role in facilitating dialogue and negotiations with North Korea, as demonstrated by its contribution to the Six-Party Talks.

All in all, pursuing proactive diplomacy with North Korea may offer the best solution for both de-escalating military tensions and fostering regional cooperation to engage North Korea. This may take more credible signals and actions of diplomacy and assurance from the U.S.-South Korean side. At the same time, Washington and Seoul would need to more actively consult Beijing regarding possible measures that they can agree on and implement together to bring Pyongyang back to dialogue.