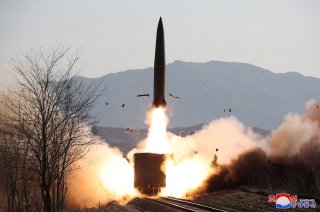 The Office of the Director of National Intelligence (DNI) released its Annual Threat Assessment report this week. The report uses what it describes as the “collective insights” of the intelligence community to assess national security threats. The report will be delivered to the Intelligence and Armed Services committees in both the House and Senate.

The North Korean section references the possibility of a nuclear test by the Kim regime this year.

According to the report, Kim Jong-un  “will continue efforts to steadily expand and enhance Pyongyang’s nuclear and conventional capabilities targeting the United States and its allies, periodically using aggressive and potentially destabilizing actions to reshape the regional security environment in his favor.” The DNI report also states that Kim’s weapons and missile programs are the “the ultimate guarantor” of his rule in North Korea. At the same time, Kim likely does not see the current level of Western pressure as a reason to reassess the country’s weapons posture.

“North Korea began laying the groundwork for an increase in tensions that could include ICBM or possibly a nuclear test this year—actions that Pyongyang has not taken since 2017,” it says. “Flight tests are part of North Korea’s effort to expand the number and type of missile systems capable of delivering nuclear warheads to the entire United States.”

In addition, North Korea is still seeking sea-launched nuclear strike capabilities. There is also concern that North Korea could use chemical or biological weapons during a conflict or attack.

ODNI also assessed that Kim will seek to undermine the alliance between the United States and South Korea by “vacillating between periods of escalatory behavior and symbolic gestures toward the South” to take advantage of differences in the two countries’ approaches.

Starting Back Up at Punggye-ri?

A report this week from Arms Control Wonk found that construction was taking place at North Korea’s nuclear test site at Punggye-ri. North Korea had announced in the spring of 2018 that it was closing and dismantling the site. The report described changes as “very preliminary,” meaning the site is months, if not years, away from being used for explosive testing.

North Korea announced a moratorium on nuclear testing and intermediate- and intercontinental-range ballistic missiles in 2018. However, following the summits with then-President Donald Trump, the Kim regime announced in late 2019 that the moratorium was no longer in effect.

North Korea has already launched missiles several times this year. The United States responded by increasing readiness in the region.

The ODNI report expresses nuclear concerns about other countries, including Iran. As for China, the report states that “Beijing will continue the largest-ever nuclear force expansion and arsenal diversification in its history. Beijing is not interested in agreements that restrict its plans and will not agree to negotiations that lock in U.S. or Russian advantages.”