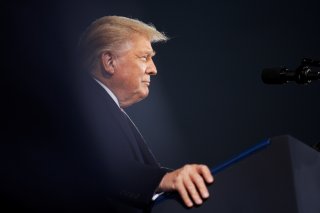 If Donald Trump is re-elected as president of the United States, then the possibilities for his Korea policy are wide open. But if Joe Biden is elected as president, then Americans can expect him to take a fairly establishmentarian approach. Biden has already signaled a traditional hawkishness on North Korea—alliance reassurance, no summits with North Korean leader Kim Jong-un, no Trumpian claims to a unique personal relationship with Kim, and so on. With Trump, as so often, unpredictability reigns. There are two broad possibilities:

1. Trump goes for a deal with his “friend” Kim Jong-un.

Trump and his team have hinted here and there this year that a re-elected Trump would strike a deal with Kim. The logic here is that Trump will be free from re-election pressures and can express himself more fully in a second term. Also, Trump wants a deal because he deeply craves the expected adulation, including a Nobel Prize Peace perhaps, and cares little for the Korean peninsula. So he would comfortably sign even a balance-negative deal for the exciting imagery of a breakthrough on a long-standing problem.

A corollary of this approach is that Trump is a nationalist retrencher at heart. He would gladly trade away U.S. Forces Korea for a deal with Kim, and if the South Koreans and U.S. foreign policy community do not like it, well, who cares? Trump does not listen to foreigners or the American Deep State; he defends America First.

This describes a maximalist Trumpism, where Trump genuinely follows through on his transactional foreign policy impulses to abandon U.S. allies as troublesome free-riders and cut deals with dictators whom he somewhat admires for their unchecked authority.

The problem with this scenario is that Trump would run into a wall of bureaucratic resistance in Washington, DC. Washington strongly supports the U.S. alliance network. A bad deal with North Korea, particularly one which abandoned South Korea, would spark massive resistance in Congress, the Defense Department and State Department, and the wider foreign policy community of think-tanks and analysts focused on East Asia. The criticism on U.S. op-ed pages would be crushing, just as it was throughout 2018 and 2019 when Trump met Kim the first time. Then Trump’s efforts were widely derided as photo-op diplomacy, and in Hanoi in 2019, Trump admitted that he abjured a deal in part because of the domestic criticism he would face.

It is worth recalling that President Jimmy Carter also tried to pull USFK out of South Korea and collided with widespread resistance. In time, he simply gave up and only 3,000 US soldiers were withdrawn. A Trump deal with North Korea - likely burdened by the widespread perception that it is a bad deal struck solely out of Trump’s lust for publicity and a Nobel - would be met with the same fierce resistance. Trump, notorious for his laziness and inability to stay focused on issues over the long term, likely does not have the focus and self-discipline to fight a protracted battle with the rest of Washington.

2. Trump simply ignores Korea as not worth the trouble.

Given that Trump probably does not want to fight alone against the entire Washington establishment over a mid-size issue like Korea—if only because it is too much work for someone who would rather watch TV or surf Twitter. It is likely that he will simply drop the issue as he already has for the last year or so.

Perhaps he will have a summit with Kim, but at this point, everyone knows that those are not meaningful. They do not cap a long process of bureaucratic work with a treaty—as, for example, the Camp David Accords of 1978 did. Instead, Trump-Kim summits are better described as made-for-TV visits. So if Trump meets Kim again in 2021, without the requisite preparation yet again (which is likely), then that summit will be irrelevant despite the inevitable hyperventilating TV coverage.

In the end, nothing much will happen here, just as nothing much happened over the past four years. For all of Trump’s threats and then blandishments toward North Korea, the empirical situation on the ground in Korea is unchanged, as is U.S. force structure in the region (and that of the two Koreas too). Maybe Trump will actually put some teeth on his Korean sound and fury, but so far, it has signified nothing, and it seems safe to predict that in the future too.