Expert: If You Want North Korea to Give Up Nuclear Weapons, Start by Ending the Korean War 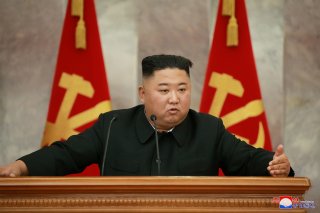 For the last thirty years, Washington orthodoxy has held that the Kim regime must first denuclearize for peace to emerge between the US and the DPRK. This order of events needs to be turned on its head, Ahn said in an interview with the Ploughshares Fund podcast, Press The Button.

“We’re flipping that around and saying you actually need to get to peace because North Korea is in a siege mentality,” she explained. “And how do you do that? You negotiate a peace agreement. That begins the process of normalization. That begins the process of trust-building. And that, hopefully, will lead to the elimination of nuclear weapons on the Korean Peninsula.”

As Ahn points out, the Korean War never formally ended. While major fighting on the peninsula ceased after the 1953 armistice agreement, the accord was meant to be a temporary stopgap until both sides implemented a peace treaty. It was a process they thought would take months. Sixty-seven years later, it still hasn’t happened.

Still, she remains confident that “the architecture has been built” for a lasting peace, and that current pressures may encourage change. The immense economic impact of the coronavirus pandemic and the rising demand for a restructuring of domestic programs mean that a conflict with Pyongyang is low on Washington’s list of funding priorities. And even if money wasn’t a factor, North Korea’s budding nuclear arsenal and vast conventional forces within range of Seoul makes a shooting war something “to avoid at all costs,” said Ahn.

But other factors are more deliberate. South Korea, long seen as the junior partner to the United States, has thrown its full weight behind inter-Korean reconciliation, with President Moon Jae-in making peace with the Kim regime a main priority of his government. And after a landslide victory in the April elections, Moon remains strongly placed to pursue his peace agenda, despite recent diplomatic hurdles from Washington and Pyongyang.

“It gives him a huge platform to push his signature policy, which is an end to the Korean War,” Ahn explained. “And now he has the full power of the National Assembly to back him up.”

This doesn’t mean Moon’s domestic support is unanimous, however. After receiving a stern complaint from Pyongyang last month over leaflet-carrying balloons sent over the border by North Korean defectors, Seoul withdrew the operation permits of the two groups responsible, prompting an outcry from the right that Moon was pandering to the Kim regime and ignoring its human rights abuses.

Ahn herself is no stranger to this breed of criticism. In May 2015, she and nearly thirty other activists - including feminist icon Gloria Steinem and Nobel laureates Mairead Maguire and Leymah Gbowee - walked across the Korean demilitarized zone in a widely publicized peace demonstration organized by Women Cross DMZ. The reception was not all positive. Right-wing press accused Ahn of carrying water for the Kim regime, and there were even concerns about her personal safety once she arrived back in the South.

“One of the narratives that was in the mainstream media was that we were pro-North Korean, that we were handmaidens of the North Korean regime, that we didn’t care about human rights,” explained Ahn, who forcefully denied the accusations. “Our position has always been in order to get to denuclearization, you need peace; in order to get to human rights, you need peace.”

This position gained some momentum earlier this spring, when UN Special Rapporteur on North Korean human rights Tomás Ojea Quintana published an official report that stressed the need to fast track a peace agreement separate from the denuclearization talks. He also singled out Women Cross DMZ, calling their 2015 demonstration “unprecedented” and saying that governments needed “to hear the message from this movement.”

Ahn said the report was “redemptive,” and that she still holds out hope that a lasting peace may yet become a reality on the Korean Peninsula, even if some of that hope comes from an unlikely source. Pointing to the massive disruptions caused by the coronavirus pandemic, Ahn argued that the crisis “is forcing all of us to look deeply in our hearts about what is meaningful, what is essential.”

“We are in this cauldron right now,” she said. “But I have faith in the spirit of human decency and goodwill that we will come out as a better society, a better country, and a better world.”

The entire interview with Christine Ahn is available here on Press The Button.