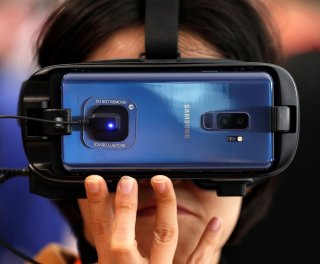 With the dust barely having settled on this year’s crop of 5G releases, Samsung is already looking ahead to 6G as the coming future of mobile technology.

In a sweeping white paper published earlier this week, the South Korean tech firm outlined their vision for “a next generation communication system” many orders of magnitude faster than 5G: “While 5G was designed to achieve 20 Gbps peak data rate, in 6G, we aim to provide the peak data rate of 1,000 Gbps and a user experienced data rate of 1 Gbps,” the paper reads.

Samsung is keen to stress that 6G isn’t merely “faster” than anything currently at our disposal; whereas the leap from 4G to 5G was all about raw performance gains in things that you already do on your phone—streaming, gaming, communication—6G seeks to fundamentally transform what it means to use a mobile device. We’ve barely scratched the surface of all the possible uses for such astonishing speeds, but the white paper offers a fleeting glimpse of what the future may hold. With not only fifty times the speed of 5G but approximately one-tenth of its latency, 6G-enabled smartphones will pass the network requirements to render 3D holograms. In fact, 6G also opens the door for rendering full-sized human holograms on 3D displays.

Under the umbrella term “XR” or Cross-Reality, 6G also promises to elevate augmented reality (AR), virtual reality (VR) and mixed reality (MR) technologies from the niche gimmicks that they currently are to a mainstay of everyday life. Examples of 6G-powered XR applications include lifelike, low-latency 8K or 16K resolution simulations that can change the way that everyone from military servicemen to astronauts performs their jobs, as well opening new possibilities for remote work that render the traditional office setting obsolete. Broaching a concept that could previously only be imagined in the realm of science fiction, Samsung suggests the newfound feasibility of “digital replicas” —full-sized digital/holographic representations of objects or people that could even perform certain real-world actions with the help of AI.

The paper’s second half tries to balance the stunning potential of 6G against the years, if not decades, of work required to fully unlock it. The technical demands of 6G call for a new network architecture that combines “communications and computing so that an end user’s various devices can seamlessly utilize the computing power available in the network.” There are several platforms that can help us get there, like dynamic spectrum sharing and the rise of split computing, but each of them comes with a unique set of issues that must be resolved in the context of building a global 6G network. Even leaving aside the development of 6G itself, 6G features like holograms and XR rendering demand CPU/GPU performance, battery life, and display technology far beyond what current flagship smartphones are capable of.

Despite the numerous challenges confronting the ambitious proof of concept outlined in this paper, Samsung believes that the mobile tech industry is growing so fast that the first consumer iteration of 6G can be released as early as 2028, with mass commercialization to follow around 2030. Having founded its “Advanced Communications Research Center” for 6G-related projects in May 2019, Samsung joins the ranks of several other tech giants—including Huawei and Xiaomi—racing to be at the forefront of 6G development and delivery over the coming decade.