The Forgotten Role of South Korean Mercenaries in the Vietnam War 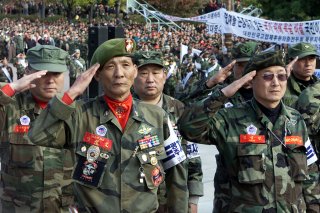 A professor of grand strategy at Georgetown University’s School of Foreign Service employed an unusual approach in discerning how his students thought: he pitted them against each other in customized war game simulations. It was in one such game during my own junior year of college that I met Charles Hernández, though the initial circumstances were less than favorable—in a game concerning a potential clash between the United States and China in the pacific, he was in control of the U.S. Army while I was unfortunately given the duty of playing as North Korea’s Kim Jong-un. Regardless, we managed to strike up a workable rapport (enough to prevent a nuclear conflict, at any rate) that would later blossom into a good friendship.

Hernández has kept busy since those halcyon days. He is now a captain in the 3rd U.S. Infantry Regiment, also known as The Old Guard—the official escort to the president of the United States. More recently, and keeping with the spirit of analyzing grand strategy in the Asia-Pacific region, he has written a short work entitled Mercenaries in the Vietnam War: Washington’s Hiring of South Korean Soldiers, which covers a part of that particular conflict’s history that is usually omitted from most discussions.

The volume isn’t particularly focused on the laborious particular details of South Koreans’ contributions and conduct in the Vietnam War, though there indeed is some of that. If anything, Hernández observes, ROK soldiers were deployed perhaps more productively than their American counterparts: their favored small-unit operations were better fit for the Vietnamese context, they on average discovered more hidden enemy weapon caches, and they were generally more feared than the Americans— “[the north Vietnamese] only engaged Korean forces in open field when victory was certain, which rarely occurred.”

Instead, Hernández devotes more attention to the political and economic reasons of why South Korea (ROK) joined the Vietnam War. And as one might infer from the book’s title, it was because of money.

South Korea after the Korean War was devastated, bankrupt, and entirely dependent on foreign aid. After seizing power via a coup d’état in the May 16 Revolution, Park Chung Hee directed his energies towards growing the country’s economy and modernizing it via a strategy of aggressive industrial policy. Yet this approach necessitated money which South Korea did not have, leaving Park to consider alternative means of acquiring such considerable sums of capital.

It is here that war in Vietnam presented a unique opportunity: the United States offered to cover essentially all the costs of equipping and deploying South Korean soldiers in Vietnam if Park could provide the bodies. Park’s administration, in turn, offered some rather advantageous inducements in order to attract a capable volunteer force: “[Each] recruit would receive credit for three years of military duty for each year served in Vietnam as well as additional monetary entitlements.” This was a rather attractive proposition, both for experienced veterans stuck in a still-devastated economy and for young men seeking adventure, money, and a way to minimize the terms of their mandatory military service.

The result, Hernández notes, was heavily in Seoul’s favor. Though the Americans lost the war, revenues from the conflict “totaled 40 [percent] of Korea’s foreign exchange earnings, and from 1965 to 1972, the country earned $1 billion in hard US currency and received $2.7 billion in foreign loans,” among other benefits. The country’s GDP increased four-fold over the same time period as the war, and South Vietnam provided a ready market for South Korean goods. In Hernández’s view, it is “reasonable to conclude that ROK participation in the conflict contributed to the nation’s rapid economic development.” Would the economically and technologically advanced South Korea that we know today exist if it weren’t for the Vietnam War?

Despite these interesting observations, I hold a complaint about Hernández’s work. Simply put, it is simply too short: I consumed it over the course of an afternoon. Hernández does write in the acknowledgements section that he intends to follow this book up with an examination of “the contemporary portrayal of South Korean involvement in the conflict within mainstream Korean literature and cinema,” along with further investigation into ROK corruption and human rights violations during the Vietnam War. I cannot help but wonder if it wouldn’t have been better to carry out that research first and then have written a thicker, more conclusive tome. A book entirely about South Korea’s participation in the Vietnam War, how it shaped the former’s growth, and how it is seen in contemporary society/literature sounds more comprehensive.

Nonetheless, Mercenaries in the Vietnam War provides informative insight into South Korea’s role in Indochina. I advise those with a few hours to kill, particularly military historians stuck at home due to the coronavirus, to take a look at it.

Carlos Roa is the senior editor of the National Interest and a 2020 Constitutional Fellow at the American Conservative & Center for the Study of Statesmanship. Previously, he was the associate editor for Horizons: Journal of International Relations and Sustainable Development.