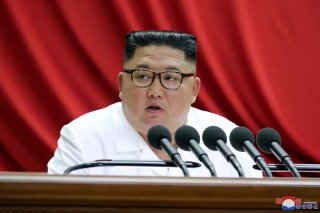 Long-time North Korea watchers share two characteristics: caution and cynicism. The former arises from seeing so many false or premature rumors—including those about the declining health of the leader; the latter, from seeing so many attempts at diplomacy fail.

The most recent media frenzy is like the childhood game of “telephone,” where a message is increasingly distorted in its retelling. In this case, an initial single-source report of Kim Jong-un recuperating from heart surgery swiftly deteriorated into reports of “grave condition” and “brain dead.”

Over the years, many false reports have proclaimed the declining health or death of Kim Jong-un, his father Kim Jong-Il, and his grandfather Kim Il-sung. The South Korean presidential Blue House downplayed the recent reports, indicating there were no indications of unusual activity in Pyongyang.

This view was affirmed by other sources in North Korea who reported normalcy, including reopening of schools after COVID shutdowns. Official media had regular broadcasting themes, including a report that Kim had sent personal greetings to the Cuban president.

However, we can’t be totally dismissive of such reports. Kim Jong-un was absent from the important April 15 celebrations of the birth of his grandfather, although this year's events were more muted, perhaps due to the COVID-related measures. More importantly, Kim has a myriad of health problems and could one chocolate wafer away from a heart attack.

It is extremely difficult to get information about the health or intentions of North Korea’s leaders. The regime delayed announcements of both previous leaders’ deaths for a day or more, and Kim Jong-il’s 2008 stroke was kept under wraps for several weeks.

The North Korean constitution, now as ever, provides no formal succession plan. Nor is there any obvious successor to Kim Jong-un. Since assuming power in 2011, he has repeatedly replaced senior officials. Being the “second most powerful man in North Korea” has not been a path to success.

While none outside North Korea would regret Kim’s passing, there is grave concern that a succession struggle might trigger extreme instability. Kim’s sudden departure could spark a potential explosion (lashing out at South Korea) or an implosion (regime collapse, internal civil war, and potential loss of control of nuclear weapons). While it is more likely that the regime will take steps for an orderly transition of power, potential instability of a nuclear power is extremely concerning.

The end-is-nigh rumors have renewed speculation over potential successors. Until recently, it was widely assumed that Kim’s sister Kim Yo-jong could never be anointed as leader in the strict Confucian culture of North Korea. However, in recent years she has gained prominence, authority, and important titles conveying power.

Regardless of who assumes control, the new leader would most likely pursue the same objectives and policies. Kim Yo-jong would remain loyal to the legacy of her family predecessors. Someone outside of the Kim family would have less of a power base and would be more reliant on support from senior party and military leaders who are overwhelmingly nationalist and resistant to change.

There is little evidence of a "reformer faction" that advocates bold economic reform, opening the country to outside influence, reducing the regime's bellicose rhetoric and brinksmanship tactics, or abandoning its nuclear weapons programs. North Korea has perpetuated the image of factional in-fighting between "engagers" and "hardliners" as a negotiating tool to elicit additional benefits.

The regime has long emphasized the centrality of nuclear weapons to its national security. Hence, its resistance to negotiating them away. Under Kim Jong-un, North Korea altered its constitution to affirm itself as a nuclear weapons state and declared its nuclear weapons and ICBM programs complete. North Korean officials have repeatedly rebuffed U.S. and South Korean attempts at dialogue, even rejecting American offers of COVID assistance.

While there is always great uncertainty and trepidation about North Korean intentions and capabilities, those unknowns and fears are magnified during a leadership transition. Rumors of Kim’s failing health should be met with caution, but they should also trigger continued vigilance against the myriad of threats the regime can pose to the United States and its allies.

Kim Jong-un’s poor health underscores the potential brittleness of regime stability as well as the potentially fearful consequences of a botched transfer of power. The U.S., South Korea, and Japan should review intelligence collection strategies to discern whether additional assets are necessary. The three countries should coordinate their national contingency plans for North Korean scenarios.

The potential for crisis in northeast Asia should affirm the need for Seoul and Tokyo to overcome divisive historic issues and focus on the common threat of the current millennium. Similarly, Washington should abandon its demands for exorbitant increases in allied contributions for the cost of stationing U.S. forces overseas. Now is the time for the U.S. and its allies to be working together, not bickering amongst themselves.