Former Head of U.S. Marines in Pacific: What Would Happen if Kim Jong-un Died Suddenly? 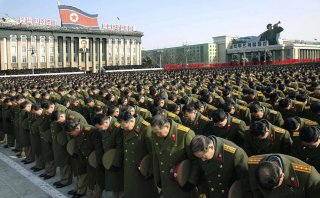 It’s not clear that Kim is at death’s door. Uncorroborated reports are clearly not dispositive.

If he dies, we will get the succession wrong. North Korea is the hardest hard target for our intelligence community. Even countries with embassies in Pyongyang operate in an information desert.

When Kim Il-sung died, the common opinion was that his son, an insecure playboy, would never be equal to the task. We made a similar assumption when Kim Jong-un moved up. He was too young to be effective, and accustomed to a luxurious life overseas. His matriculation at Swiss schools led to hopes that he would liberalize North Korea. His brutal and public assassination of Jang Song-thaek, a senior official in his father’s administration and an official assumed to be China’s most effective contact, put “paid” to that thought.

We assume the regime has about one million core supporters. They live very well by North Korean standards. Their goal is to maintain their position. That means an orderly succession with order and security.  “Opening up” is off the table, as that road risks the International Court of Justice at the Hague or Chinese suzerainty.

It means keeping their nuclear weapons. Their arsenal was a three-generational effort, beginning with Kim Il-sung in the 1960s. North Korea and Pakistan’s A Q Khan collaborated and took nuclear proliferation to an entrepreneurial level. North Korea would enjoy even less interest from the rest of the world if they did not have nuclear weapons.

U.S. guarantees will not be much help. Kim has watched the collapse of Libya and the killing of Muammar Ghaddafi on the news. We have abandoned other international agreements lately, so any promise of non-interference in Korea’s future, specifically including their status as a nuclear weapons state, would be suspect. There will be no trade of condos on the beach for their weapons.

The Kim family is supported by a global criminal network. It involves everything that can make money, and nuclear proliferation is likely a big profit center. Other illicit ventures include high-quality counterfeiting, apparently majoring in U.S. $100 bills. Our treasury goes to some great lengths to defeat it. Narcotics trade is another favorite. Many North Korean businesses operate legally across Asia and the world, others operate clandestinely.

Recall the murder of Kim Jong-nam in the Kuala Lumpur Airport. That attack featured very sophisticated deployment and employment of a weapon of mass destruction – VX nerve agent – delivered by two allegedly unwitting young ladies. Not only did North Korea deploy VX outside of their country, they employed it in a crowded airport. They killed the target of the operation with a lethal crowd-killer but harmed no one else, not even the ladies involved. It’s likely that this was more than a revenge killing of the half-brother. It also served eloquent notice to all nations of South East Asia that the Kim Family Business had the ability to execute damaging attacks on any authorities that pressured any North Korean expatriates operating openly or clandestinely in their country. UN sanctions called for nations to send the expatriates home.  That’s not likely to happen under any new leader, it’s simply too profitable to shut down. Kim Jong-nam was reportedly under Chinese protection. So much for North Korean worries about China.

What might change for the better is the unofficial North Korean market economy, growing with expanding North Korean cell phone usage. Technically illegal, it operates with the tacit permission of the state for one reason – profit.  The core supporters benefit. As with many other things that appear upside down in North Korea, a capitalist shadow economy supports a brutal dictatorial regime.