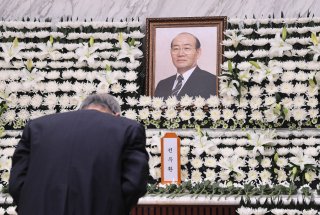 The Blue House said it would not provide flowers or any other form of public condolences for the funeral of ex-president Chun Doo-hwan, who passed away on the morning of November 23, Korea time. The veterans' affairs ministry said Chun would not be eligible for burial at the national cemetery on account of his treason conviction. Neither of the contending presidential candidates in the March 2022 elections indicated they would offer condolences, either.

Lee Jae-myung, who is representing the ruling Democratic Party, said he had no intention of offering condolences and called for continued investigation of Chun’s stolen assets and massacre of protesters in Gwangju in May 1980.

“Through his final moments, the unforgivable criminal who killed least a few hundred in order to usurp state power for his own personal desires never reflected and apologized to the people,” Lee said.

Chun was sentenced to death for crimes committed during his eight-year reign, but his sentence was commuted in 1997 before he had served one year, and he refused to pay over 167 billion won (US$140 million) in fines he owed the state.

“It is difficult to mourn for him willingly,” Lee said.

People Power Party nominee Yoon Seok-yeol was less critical, providing no fiery rebuke of Chun’s legacy, but he ultimately decided not to offer any kind of condolences. He appeared non-committal at first, saying, “I don’t know when I will go. I am looking at the schedule and thinking should I go or not, since it’s the former president.” But later that day, the spokesperson of the People Power Party election committee stated that Yoon would not visit to offer condolences.

Yoon’s comments about Chun were the subject of controversy in October, when he remarked that “besides his coup and May 18 [the Gwangju massacre],” Chun did some good things as president. If he were to make official condolences or statements of sympathy towards Chun, the Democratic Party would not miss the chance to cast him as a lover of tyrants.

Former general Koh Myung-seung did express his good wishes. While visiting Chun’s home he said, “My heart hurts.” Koh was a fellow graduate of the Korea Military Academy and member of Chun’s Hanahoe clique who led forces to take over the Prime Minister’s residence by force during Chun’s 1979 military coup.