At the G20, Trump Should Be Wary of China's North Korean Designs 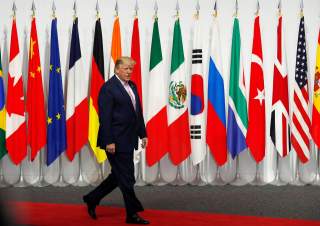 While Donald Trump is in Asia, Japanese and South Korean leaders will no doubt seek clarity on his views about alliance responsibilities and his strategy regarding North Korea.

These alliance questions are fairly new to the agenda, arising in the wake of recent remarks by the U.S. president. First came Trump’s suggestion that other nations should be responsible for protecting maritime transit through the Hormuz Strait or reimburse the United States for doing so. He subsequently questioned the one-sided nature of the U.S.-Japan alliance, saying, “If we’re attacked, Japan doesn’t have to help us at all.”

Though Trump is unlikely to take action on either topic, his comments concern U.S. allies since they are consistent with decades of remarks fixating on the cost rather than the purpose of American military forces and operations overseas. For instance, the recent U.S.-South Korea Special Measures Agreement (“burden-sharing”) negotiations were more contentious than usual, fueled by Washington’s demands for exponential increases in Seoul’s reimbursement for stationing U.S. forces there.

Those negotiations concluded with only an 8 percent increase in South Korea’s contribution, but with the requirement to renegotiate annually instead of every five years. Next year’s negotiations with both South Korea and Japan will occur under the cloud of this year’s demands for a 100 percent increase or even Trump’s “cost plus 50 percent.” The focus on monetary compensation reflects Trump’s transactional view of alliances and stationing U.S. forces overseas.

Trump and Kim Jong-un’s exchange of “beautiful” and “excellent content” letters has fueled speculation of an imminent return to summit diplomacy. A media article even suggested a possible surprise photo op between the two leaders when Trump travels to the demilitarized zone during his trip to South Korea. Both Washington and Seoul denied any meeting is scheduled.

Washington does hope, however, for a resumption of working-level meetings. Secretary of State Mike Pompeo commented that there is a “very real possibility” of America resuming talks with North Korea “at a moment’s notice.” But Pyongyang rejected numerous attempts by Special Envoy Stephen Biegun for dialogue to add meat to the bare bones of the year-old Singapore Summit statement.

The Trump administration has conditioned a third summit with North Korea on significant progress at the working-level on detailed denuclearization commitments and plans for achieving them. But, Pyongyang has provided no indication it is willing to do so and warned Washington that it must soften its position lest the regime takes stronger—though yet unspecified—measures.

However, the United States could again lower the bar for agreeing to another summit, as it did with the Hanoi summit. In December 2018, National Security Advisor John Bolton stated that the lack of progress since Singapore affirmed in the president’s mind the need for the second summit. After receiving another obsequious letter from Kim this month, President Trump could portray a third summit as necessary to break the current impasse.

During Trump’s visit to Seoul after the G20, the U.S. will seek to reassure South Korea that, despite the lack of progress, it remains committed to a diplomatic resolution of the nuclear crisis. Washington must concurrently strive to brace Seoul to maintain rigorous sanctions enforcement. There now appears to be less tension in the bilateral relationship since President Moon Jae-in is pushing less forcefully for a reduction or exemptions to international sanctions to enable inter-Korean economic projects.

However, South Korea’s self-appointed role as a go-between for Washington and Pyongyang has been eclipsed by China. Kim’s recent meeting with Chinese President Xi Jinping, while refusing dialogue at any level with Seoul, reflects how sidelined President Moon has become. Pyongyang dismissed Seoul as an “obsequious mediator” and even rejected South Korean offers of humanitarian assistance as “insulting.” The South Korean government, surprised by the outcome in the Hanoi summit, is now at a loss on how to proceed.

Kim Jong-un seeks to negotiate an arms control agreement that caps rather than eliminates his nuclear and missile programs, akin to a North Korean START agreement. According to North Korean documents, Kim told his generals that talks with the United States were “the first step to elevating North Korea’s status as a global nuclear-capable state.” Prior to the Hanoi summit, Kim said the goal of dialogue with Washington was to “obtain the ultimate result” of being recognized as a nuclear weapons state.

Trump must resist the temptation to prematurely agree to another summit with North Korea. Through presidential letters and other means, Washington should emphasize to Pyongyang that productive working-level meetings must precede another leader meeting.

Washington should also emphasize that the maligned “big deal” it offered in Hanoi is only what North Korea is required to do under eleven UN resolutions and what Pyongyang already committed to doing in eight previous international denuclearization agreements.

That said, such an expansive agreement can be implemented in phases. The Trump administration has issued conflicting public messages on whether total denuclearization must precede any sanctions relief. Private discussions with U.S. officials have also provided contradictory depictions of an acceptable agreement. The Trump administration should more clearly articulate the parameters of a comprehensive agreement that fulfills UN resolution requirements while providing a path to reducing UN sanctions.

Bruce Klingner is Senior Research Fellow for Northeast Asia at the Heritage Foundation. He previously served 20 years with the U.S. Intelligence Community, including as CIA’s Deputy Division Chief for Korea.