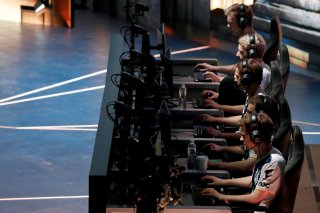 Within the past several decades, competitive video games have surged in global popularity to become one of the world's fastest-growing new sports mediums. In 2020, “esports” is a billion-dollar industry with a massive following—and South Korea is at the center of it all.

According to the most recent estimates, ROK’s gaming industry is worth $6.4 billion. That’s 8.8 percent of the country’s 2018 total trade surplus, and as much as 67.2 percent of its cultural content industry. These numbers, impressive as they are, are not entirely unique; after all, the United States and Chinese gaming markets are both bigger in raw dollar terms.

What sets ROK apart is how deeply embedded competitive gaming has become in South Korean mass-culture, making it an ideal breeding ground for a dynamic and highly lucrative pro gaming scene. Many in the West typically see gaming as a solitary affair to be conducted from the comfort of your home, but the streets of Seoul are littered with “PC Bangs”: think of them as internet cafes tailored to online gaming, where patrons pay per hour to play on gaming PC’s. PC Bangs emerged as a Korean cultural mainstay with the release of multiplayer strategy game Starcraft: Brood War in 1999. It became part of Seoul teenagers’ daily routine to meet up in PC Bangs after school and play Starcraft for hours on end, comparing themselves against their friends and training to climb the ladder of globally-ranked players. The runaway popularity of Starcraft spawned the first wave of pro gamers like Lim Yo-Hwan, treated as celebrities by the growing ranks of South Korean esports fans.

South Korea’s Culture Ministry sought to get ahead of the curve in 2000 with the creation of the Korea e-Sports Association (KeSPA), responsible for managing large esports events as the competitive scene branched out beyond Starcraft to titles like League of Legends and Dota 2. Events grew to encompass entire stadiums, with tens of millions of viewers across the world and prize pools in the millions of dollars. To get a scale of how lucrative ROK’s esports industry has become, consider that one of South Korea’s most popular pro gamers, Lee “Faker” Sang-hyeok, has a yearly salary of roughly $4.6 million; the average NFL player makes $2.7 million. These hefty earnings are driven by advertising revenues, merchandising/ticket fees, and a steady stream of sponsorships from corporations looking to capitalize on gamers as a growing target demographic.

Once seen as a “juvenile delinquent activity” by the more conservative segments of South Korean society, esports is now widely embraced as a source of national pride. Accredited Esports Academies operate across Seoul, and the Culture Ministry expects over 100,000 new jobs to be added by the mid 2020’s to support the booming South Korean esports infrastructure of producers, designers, engineers, promoters, and organizers.

Seoul has become the Hollywood of professional gaming; a densely-packed, cost-efficient network of competitors, managers, and sponsors working in tandem to produce one of South Korea’s most profitable and popular cultural exports. Dutch esports personality Manuel Schenkhuizen offered a lucid assessment of South Korea’s achievement: “Pro gaming exists in its current form and size in large part thanks to the people who made it possible in South Korea. Other countries took years to catch up and are to this date trying to mimic some of their successes.” As the Culture Ministry prepares to relax older regulations to better support the competitive gaming industry into the coming years, the ongoing boom in digital content consumption and consistent growth of the global games market augurs a bright future for South Korean esports.