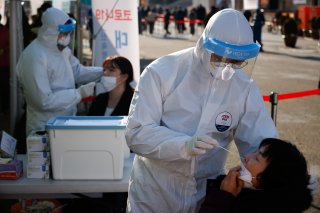 South Korea’s capital city of Seoul and surrounding areas—home to roughly half of the nation’s fifty-one million population—have banned gatherings of five people or more over the Christmas and New Year’s holidays, as the country has continued to see a surge in coronavirus cases and deaths over the past two weeks.

President Moon Jae-in’s administration has so far resisted calls to impose a strict national lockdown, but more local governments are taking quick action to curb the further spread of the virus.

“This is the last chance to break the spread.”

The ban on gatherings, in effect until January 3, applies to all indoor and outdoor functions, except for funerals and weddings. Ski resorts and popular tourism venues will be shut down as well.

Restaurants will be fined up to three million won ($2,700) if they violate the order, while customers may be hit with a one hundred thousand won penalty, according to the Central Disaster and Safety Countermeasures Headquarters.

“We intend to break the force of the third wave with measures that are stronger than those under (the highest) Level 3 social distancing,” Prime Minister Chung Sye-kyun said in an interagency task force meeting.

“The government will block transmissions in everyday life in practical ways rather than through the formality of adjusting levels.”

On Wednesday, South Korea’s daily new coronavirus cases climbed to above one thousand for the first time in three days, raising the total caseload to 52,550 over the ten-month-long pandemic, according to the Korea Disease Control and Prevention Agency (KDCA).

The KDCA noted that within the past twenty-four hours, seventeen people died from complications of the virus, which further raised the total death toll to 739.

Within Seoul, restaurants and similar venues accounted for 41.4 percent of cluster infections over the past four weeks, followed by 16.9 percent from offices, 15.5 percent from places of worship, and 12.3 percent from medical facilities and nursing homes, according to local government data.

Korea has also announced that it will suspend all flights arriving from Britain until the end of this year over concerns about a new strain of the coronavirus. The country’s diplomatic missions in Britain will suspend issuing quarantine-waiver documents, which will subject all arrivals from there to enter a fourteen-day quarantine, according to health authorities.