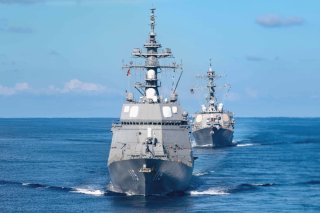 North Korea has reacted critically to President Biden’s planned meeting with Japanese and South Korean leaders ahead of the NATO Summit in Madrid. State media in the hermit kingdom compared America’s alliances in Asia with the European bloc.

“The U.S. is hellbent on the military cooperation with its stooges in disregard of the primary security demand and concern by Asia-Pacific countries,” North Korean state news agency KCNA said Wednesday, as cited by the Guardian.

The KCNA report slammed the alliance as “motivated by Japan and South Korea’s kowtowing to the U.S.,” calling it a “dangerous prelude to the creation of an Asian version of NATO.” The statement went on to slam NATO as “nothing more than a servant of the realization of the U.S. hegemony strategy and a tool of local aggression.”

The United States, South Korea, and Japan are expected to conduct joint military exercises, described by the newspaper as “a combined missile detection and missile tracking exercise,” later this summer. Japan and South Korea are not members of NATO, but their leaders will be attending the NATO summit as “observers.” According to Time magazine, this is “another sign of Western-style democracies teaming up to meet the bellicose challenge of Moscow and the growing global assertiveness of Beijing.”

“As the only Asian country in the G7, Japan’s diplomatic capabilities are being tested,” Japanese prime minister Fumio Kishida said, according to Time.

There is not an Asian version of NATO, nor do there appear to be any plans to create one. There was a Cold War-era organization called the Southeast Asia Treaty Organization (SEATO), which was created in the 1950s; it mostly included countries from outside the region who had an interest there, including the United States, France, and Australia. However, SEATO was dissolved in 1977. It has since been replaced by the Association for Southeast Asian Nations (ASEAN).

In other North Korean news this week, the country “leads the world in crypto crime,” according to a new report by Coincub.com. The United States is second, followed by Russia, China, and the United Kingdom.

“When it comes to crypto crime, some countries are more prolific than others. North Korea is by far the top-ranked country for crypto crime. Skilled hackers in the Hermit Kingdom have raised funds for the country’s weapons programs through a relentless series of profitable cyberattacks. Attacks from the DPRK’s cyber army have targeted governments and private organizations across the world,” the report said.

“The United States comes second thanks to the scale of its underground crypto economy and a series of high-profile scams. U.S. indictments also mean that many crypto crimes are tried under U.S. jurisdiction.”