The Hanoi Summit – We Asked Alicia Sanders-Zakre What Happens Next in U.S.-North Korea Relations 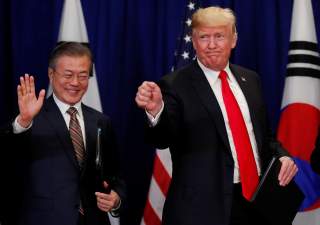 U.S. president Donald Trump’s shift to a “go big or go home” approach to negotiating with North Korean leader Kim Jong-un led him to walk away from the Hanoi summit without any agreement onnext steps towards denuclearization and peacebuilding. To get diplomacy back on track, U.S. and North Korean working-level negotiating teams must meet consistently and often to negotiate incremental steps that advance both sides’ goals. A good start would be a deal to verifiably dismantle facilities at the Yongbyon nuclear complex in exchange for limited sanctions relief, which may have been on the table before Hanoi.

In between the Singapore and Hanoi summits, U.S.-North Korean working-level negotiations were too few and far between. While working-level talks picked up in January and February, these efforts came too late reach an agreement before Hanoi. The United States and North Korea can’t make the same mistake again. U.S. Special Envoy for North Korea Stephen Beigun must meet regularly with his North Korean counterparts to make concrete progress.

It is also crucial that the United States pursue a realistic step-for-step agreement, instead of a daydream deal. Recent U.S. statements suggest the Trump administration is back to demanding a “big deal,” which, according to National Security Advisor John Bolton, would include North Korea dismantling its nuclear, chemical and biological weapons programs and ballistic missiles, in exchange for “an enormous economic future.” This approach is hopelessly unrealistic. Pushing this pipedream deal, especially while offering only vague economic promises in return, will lead nowhere.

Instead, the United States must face facts. Verifiably dismantling nuclear facilities at Yongbyon as a first step toward denuclearization in exchange for limited sanctions relief would significantly curb North Korea’s bomb fuel production and would retain U.S. leverage for future negotiations. Details still need to be hammered out, including which Yongbyon facilities will be dismantled, which sanctions will be lifted, and which inspectors will verify the work. The United States should press for International Atomic Energy Agency inspectors to conduct verification for transparency and legitimacy. These are gaps that working-level negotiators can bridge.

All this will not be decided tomorrow, or at the next summit. In the meantime, North Korea’s voluntary nuclear and missile testing freeze and U.S. and South Korean modification of joint military exercises help build confidence. To progress during this window of opportunity, U.S. and North Korean negotiators must meet regularly and pursue a step-for-step deal.