The Hanoi Summit – We Asked Amber Jamil What Happens Next in U.S.-North Korea Relations 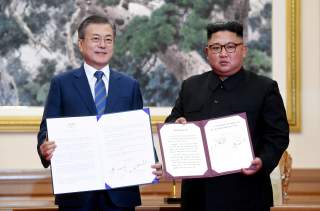 In the aftermath of the Hanoi Summit, will U.S.-Korea relations stay at age-old loggerheads or will talks eventually lead to denuclearization and a market economy? North Korea’s evolving understanding of the value of weapons dismantlement v.s. deployment may be informed by South Africa’s history of an isolated pariah state which relinquished its weapons program to raise its standing in the international order.

The United States can advance a framework which allows North Korea to maintain its nuclear leverage on a path to regional integration without engaging in brinkmanship. This is a significant moment in which to consider the long afterglow of a successful dialogue with previous states seeking to rejoin the international order.

North Korea’s strategic objectives for its weapons program are twofold; regime longevity and traction in the international order. It recognizes it cannot use its weapons without immediate and assured annihilation nor sell them without detection by international nonproliferation programs. North Korean leader Kim Jong-un’s current negotiation position of piecemeal concessions to America in exchange for aid and U.S. withdrawal from the Korean peninsula is misaligned with its interests in regime survival and elevation in the international order. To shift North Korea from its position to one of common interest, the United States must avoid the threat of force, defensive alliances, and economic sanctions. Instead, Washington must offer a pathway to denuclearization which respects nuclear weapons as a compelling guarantee of sovereignty.

To understand how Kim may engage in statecraft which does not hinge on nuclear brinkmanship, South Africa serves as a case study marked by a dramatic shift from deception to cooperation. By voluntarily dismantling its weapons program and acceding as a signatory to the Nonproliferation of Nuclear Weapons Treaty (NPT), the nation benefited from sanctions relief and normalized international relations. Yet, the key to South Africa’s political calculus was the retention of enough weapons-grade nuclear fuel to reinstate its program in the future.  In doing so, South Africa had defined a disarmament roadmap which allowed recourse should international assurances have failed. Doing so demonstrates the leveraging of nuclear weapons to secure political, economic and security assurances while decoupling from the costly calculus of maintaining a weapons program.

The South Africa model serves as a case study for U.S.-Korea relations. In the larger proliferation context, it is significant for states seeking to leverage the nuclear bargaining chip to join the international order under the security of the nonproliferation umbrella.