The Hanoi Summit – We Asked Elizabeth Shim What Happens Next in U.S.-North Korea Relations 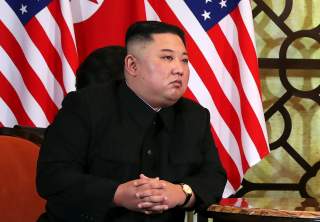 The second U.S.-North Korea summit was a spectacle for the senses. Two leaders who once threatened wholesale destruction were smiling and shaking hands. To borrow a metaphor from Roland Barthes, the summit momentarily transformed the two men into pure image, a “magical object springing up without any trace of the history that had caused it.”

When talks collapsed—because of a nuclear dispute, or simply because of the big egos attributed to President Donald Trump and Chairman Kim Jong-un—we were again taken by surprise, but only if we had fully committed ourselves to the spectacle.

North Korea is a country, but it is also a video-mediated culture, a composition of fleeting images that come and go as the leadership seeks to consolidate rule. As a reporter covering North and South Korea for United Press International, I have watched North Korea strengthen media representation. In 2017, official North Korean footage focused on ballistic missile power. The moving images of ultimately unverifiable weapons made their way to our television screens; through multiple replays, the footage amplified North Korean state power, and pushed countries like the United States and South Korea to respond with real measures.

The era of missile-launch imagery came to an end but the philosophy of North Korean propaganda hasn’t changed. Kim’s bold moves in 2018, to meet with Trump and South Korean President Moon Jae-in, proved the North Korean state is looking for ways to revive itself beyond the usual negativity. It’s too early to tell whether Kim’s new strategy is a success, or to what degree friendly overtures from Trump and Moon have limited provocations.

What we do know is North Korea’s crisis-and news-making in the digital video space—which didn’t begin until 2003—come at a time of increased media flows. South Korea’s networked technologies have played a crucial role in accelerating information into the North. South Korean media, originating from a neighboring democratic nation of prosperous co-ethnics, changes North Korean perceptions of the outside world and poses a threat to the cult of leadership. To some extent, the state must respond, possibly in kind, in the form of its own moving images.

The Hanoi Summit is being evaluated as a failure, and we’re all asking what’s next. Analysts have been quick to blame Trump and Moon. Some even say North Korea is responding to an existential threat, despite the assurances of security. It’s my view that as long as we understand North Korea within the broader frame of networked digital technologies that have taken root in the country, and North Korea’s ultimate motives to limit external influences through hyperreality, the United States and South Korea should be able to avoid some of the troubles of the past.

Elizabeth Shim is Chief Asia Writer at United Press International. She has previously reported for the Associated Press and is an alumnus of the Center for Strategic and International Studies’ U.S.-Korea NextGen Scholars Program. Follower her on Twitter at @GlobalAsianista.